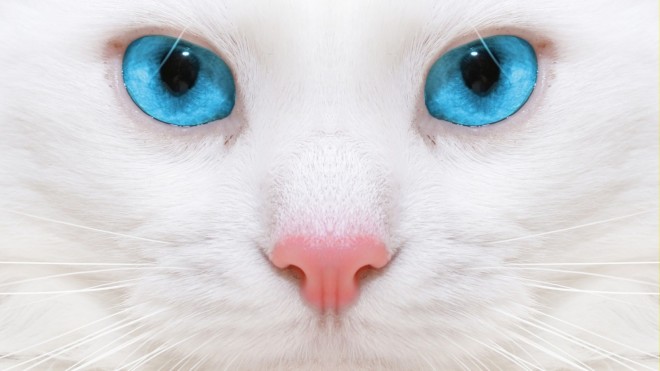 Green and yellow - the most common eye color in cats. Much rarer blue-eyed cat, because they are highly valued among breeders. How do I find genetics, a gene that is responsible for the color of the eyes, is not inherited. But there is a correlation color cat fur and the color of her eyes. The presence of blue eyes in cats is due to a special pigment in the iris eyes. These cells are called melanocytes. Their number in the outer layer of the eye is responsible for the color. The greatest amount of pigment gives brown, yellow, shades of copper, the average number of - green, but quite small - rare blue eyes. When melanocytes are absent completely turn red eye shades, like albinos. Blue eye shades ranging from royal blue to pale blue.

All kittens are born with blue eyes that can subsequently change their color, usually occurs within 4-12 weeks.

Below is a list of reasons for the appearance of blue eyes in cats.

The dominance of white color 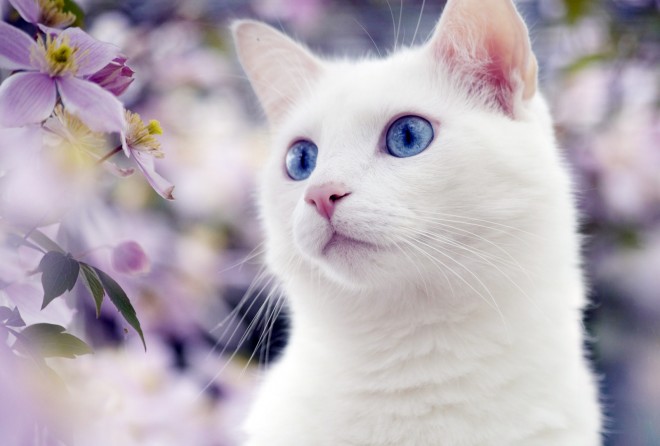 Blue eyes often inherent in cats with white coat color. It is believed that the white cat blue eye color saturation, remarkable for its incredible depth. But white cats do not have to be blue eye color, they are often colored. Heterochromia - a different eye color of the cat, which arises as a result of placing the eye in the areas of wool, which differ in color. Often white cats are deaf, this is due to the presence of W gene responsible for color. 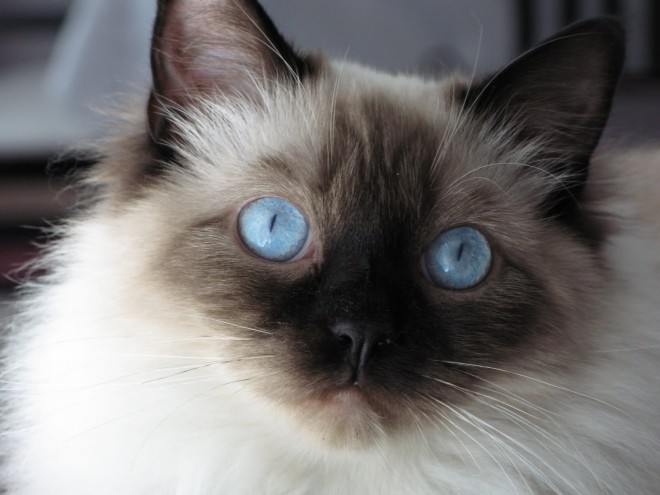 It is worth to know that this color is characteristic only for the Thai cats or Siamese breed. In the modern classification comprises about 25 species for which this color is characteristic. Deep blue of their eyes has a different degree depending on coat color. For example, in cats with type color seal point a brighter shade of the eye up to the blue and cat eyes with coat lilac tabby-point or have a dull gray shades.

There are also blue-eyed albino cats. Albinism is inherent in cats with special «caca» genetic code. The gene may also be present in Siamese cats called «cscs». The presence of this gene is represented by lightening and hair in places heavenly eye shade. Bleaching occurs due to the sensitivity of color temperatures.

These cats are called piebald, they are quite common. It can be tortoiseshell cat with a few white specks. These tiny spots called "medallions." The eyes are blue, if the white spots are located in the region of the eyes. 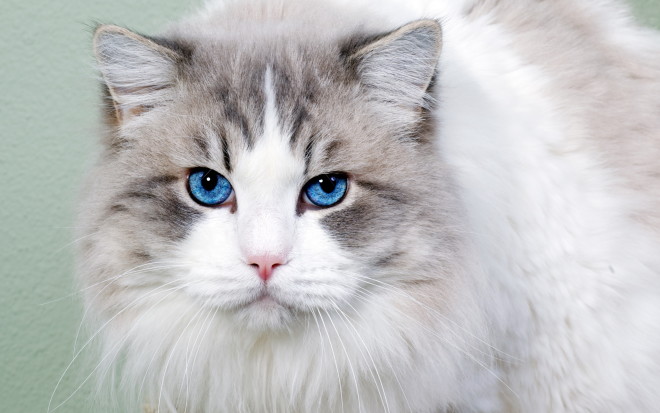 There is such a very rare breed cats like Ojos Azules (genetic code So). They have color color and blue eyes. Unlike Siamese cats, they can be cross-eyed. But the gene does not affect eyesight and hearing, but rather a feature of the breed. However, they often encountered other birth defects - the irregular shape of the skull and stillbirth. To prevent this, it is advised not to cross them with the blue-eyed cats, because This gene is transferred to and from a single parent.

In addition, we offer you to see an interesting video about the eyes of humans and animals