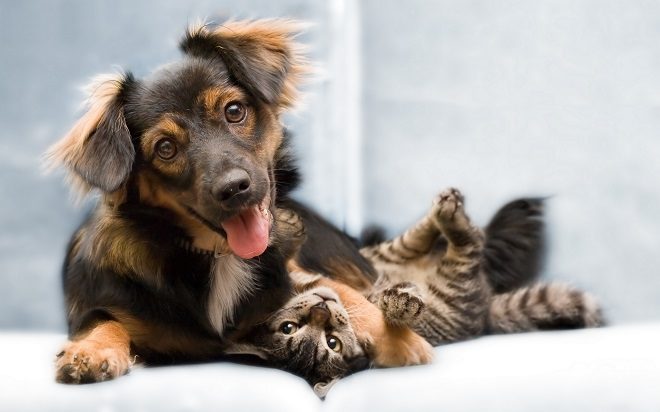 The war between the domestic animals - common stereotype. It is possible to achieve a truce, but it's not easy. How do you know whether to get involved in a relationship or is it just hurt? What makes pets conflict?

In urban settings, fights are rare. Pets faced each other many times a day. Cats behave aggressively when they met: sizzle, cooked claws, arching his back wheel. Coat purring stands on end, the animal tries to look great and formidable. Dogs this works, they take the right decision: to get away. However, in this case the cat aggression arises from the fear, neither of which there is no feud speech. Quite different is the situation when the interests of the animals face. For example, a dog comes to cat territory. Then Purring is serious, he will defend his seat. However, most often to the "battle" does not reach, but the mutual threats can be. It is worth noting that since the cat will respond to any major potential competitor.

Some dogs are "responsible" to their neighbors more sharply. They attack the cats chase them, sometimes even killed. Alas, usually taught to hunt the dogs owners, and in urban environments. The hunting instinct in animals - dangerous arm, especially if it is clumsily encouraged. Dogs then thrown not only on animals, the goal could be and runs a child or a moving car.

Cats also do not differ a great reputation. They are specially tease dogs. The latter, of course, in response to attack. If the dog does not like Purring taken separately, it does not mean that it is not prepared to negotiate with the fluffy "neighbor." The relationship is not established between species and between individuals. Dog can hate all the cats outside the house, and from "his" to sleep on a mat.

From all the above it can be concluded that any particular antipathy between dogs and cats do not. Their behavior fits into a framework that established the nature. And those and others - predators, though a little different. They have a common interest, and this is the main cause of all ills. 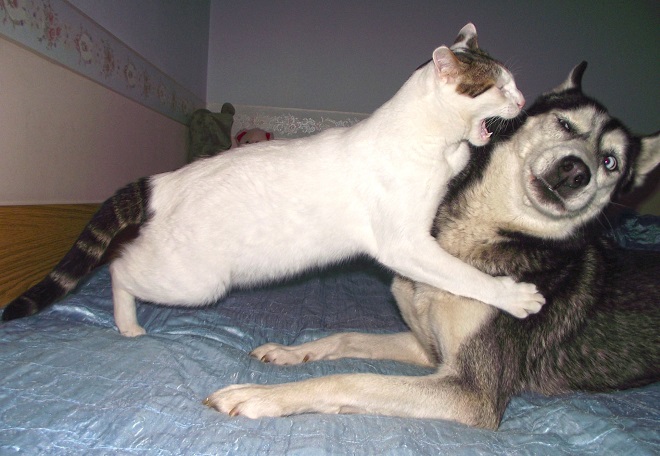 Do dogs get along with cats?

Kitten and an adult dog is easy to find a common language. The task is complicated, if the cat is older. Puppies and kittens can become friends at once, if suited to each other in temperament. They will play together, to wash one another and to carry out almost all the time together. Lactating dogs sometimes take the kittens. They keep them away to his chest and brought up as their own kids.

As a rule, dominated by a cat. He eats first, and sleeping on a bed, sofa, etc. The owners should not attempt to intervene in the hierarchy, otherwise the conflict is inevitable. Should support the leader, crushing all rebellions. The faster the animals find out their status, their relationship will be the quieter.

Let's say you live an adult dog. She was used to the family composition, to ensure that it gets the attention of one every day, does not share with anyone territory, and suddenly ... the house (which, by the way, guard dog) comes someone else. For the "old" pet is a tragedy and a lot of stress. The first meeting is very important. First, failure threatens the long feud that would be difficult to fix. Secondly, it can be dangerous. You should prepare to get acquainted. Entered in the kitty house so that the dog could not see. Some time the kid has to live in a separate closed room. The cat must necessarily have its own bowl and "bed."

1-2 weeks the animals will have time to explore each other in advance. The dog will smell coming from humming. Kitten gets used to a new place. If during this time did not raise serious problems, you can move on to the open contact. The kitten may hiss at the dog. This is a normal reaction. The kid is hardly dropped out, he just tries available to explain that one should not approach him. Cats can be immediately familiar with the dogs, but still better withstand the quarantine. You will have time to notice the symptoms of infectious diseases, if any. Purring is unlikely to immediately accept a guest. She will take some time.

We always can not help pay the kids more time than an adult pets. "Early Member" already knows how to behave in compliance with the rules. Kittens and puppies need to educate, and to watch them more interesting. As a result, the animals are in conflict. For them, the one who pays more attention to the leader, higher position. From the point of view of the older you are giving baseless privilege "novice". Junior also thinks he has the right to occupy a better place. 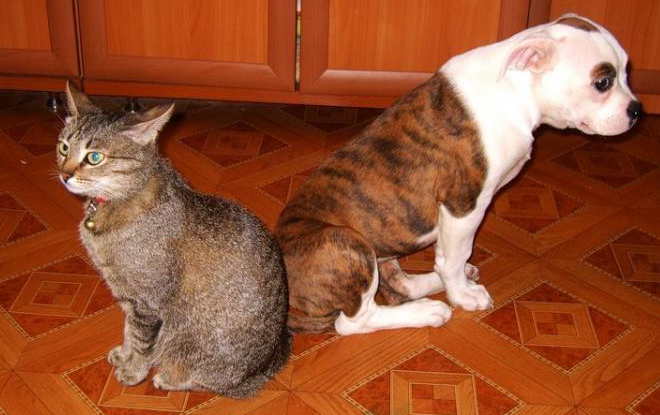 How to make friends dog and cat

In most cases, problems are created by the owners themselves. For example, some leave one bowl. For animals it is the reason to start the competition, because the nature of the food - one of the highest values. Crockery every pet should have its own, and the cat's bowl is necessary to hide from the dog. The dog did not miss the opportunity to eat other people's food.

Place to rest - it is a sacred haven, where the pet can escape if he was tired. Imagine that you are in the hostel. You annoy someone, but the private rooms you do not, so you have to endure. Approximately so the animal feels no house. Reliable den can be a cell, if there are toys, a bowl and litter. Pet will he hide it from too much attention.

It is not necessary to give a kitten has recently given birth to the dog. This is acceptable only when absolutely necessary. Of course, stories about how the mother-heroine feed other people's children, touches, but in practice the tragic cases more. The animal in this period can be aggressive, because forced to protect their offspring.

Close to the dogs and puppies can not play with the cats. Most of the "giants" can not adequately assess its size. Stormy pranks often lead to injury. A cat can injure the dog sharp claws. Mow them more often than usual, did not have time to sharpen. Fortunately, most disease is not transmitted from cats to dogs and vice versa. However, the parasites they may "share".