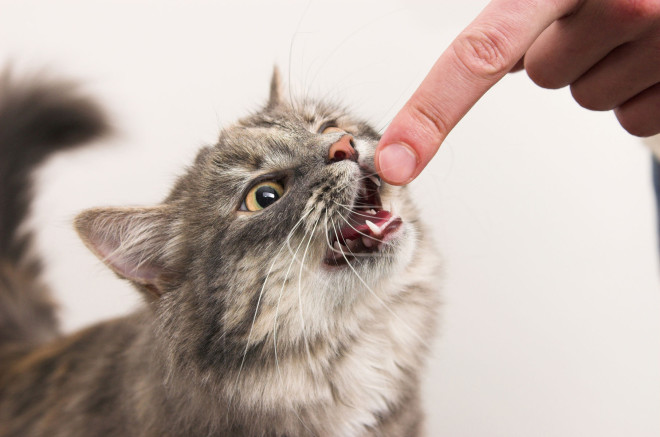 The appearance of a cat in the house - always a joy! But even the purchase of a cute kitten can be overshadowed by the fact that your pet may begin to bite and scratch, causing sometimes serious damage. Often, small kittens do not understand how to behave properly with the owners, so do not blame them for bad manners. Cat character is laid in a small age, which means that if you do not wean cat biting at once, in adulthood it is unlikely to be able to retrain. Any cat belongs to the order Carnivora, hence, such a behavior of an animal inherent nature.

To begin with, it is necessary to learn to distinguish the true reasons why your pet started to bite. Whether this was due to the change of environment or is it just an element of his game, and maybe this is just a manifestation of unwarranted aggression?

In many cases, this is due to a period of maturation, when the cat gets a new stage of development of skills or her aggressive behavior laid genetically.

Kitten bites during play and fondling

Often during a master of the game kitten may start to bite. This can be a form of the game, and the form of aggression. In order to understand what you have to deal with, should pay attention to the signs exhibited by a pet.

If you like to play with a cat hand, it certainly begins to bite and scratch, it is based on the fact that the kitten may be thinking that the hand - it is a toy, which you need to attack. Playing this way, you, without even noticing, give your pet a chance to prove themselves with a predatory side. Subsequently, your kitten will begin to think that this is normal. You should immediately begin to wean him from bad habits - buy toys on a long handle to your hand for a cat was out of range, or use the interactive toys.

The most banal reason for the attack on your hands is the usual tired of you and the reluctance to continue the game, or if you touched a sensitive pet place and he just wanted to report it to bite you.

Regardless of the case, you should keep on hand sprayed with water in order to show the cat that you are unhappy with it such behavior. Splashing should be on the animal's muzzle. This method should be deposited in your pet's memory as a kind of danger that followed after his actions.

You can also use a small flick on the nose, to show that you do not like it when you bite. Funnier, but no less effective way - the hiss on your "Snapper", which will cause him great surprise and incomprehension. Using Commands "No!" "Ugh!", Eventually also well accepted by cats.

Many people like to play with kittens legs when the pet attacks out of nowhere, you stalking and hunting for moving limbs. But it is necessary to consider to what games can bring. Many kittens it becomes a habit, if time does not start to wean. Such kitten attacks can be linked to a desire to dominate, because the instinct is always, if you do not learn how to suppress it. If you notice this behavior, it is better just clap your hands and say "No!", That is to stop your pet and next time make egozadumatsya.

In any case it is not necessary to use force against both the small kitten and an adult animal, it is fraught with more serious resistance reaction, and maybe even hostile attitude to life.

Another reason for the bad behavior of cats is a pain. Injury, trauma or internal disease can cause a cat's aggressive behavior. The animal should see a specialist in order to prevent the consequences. 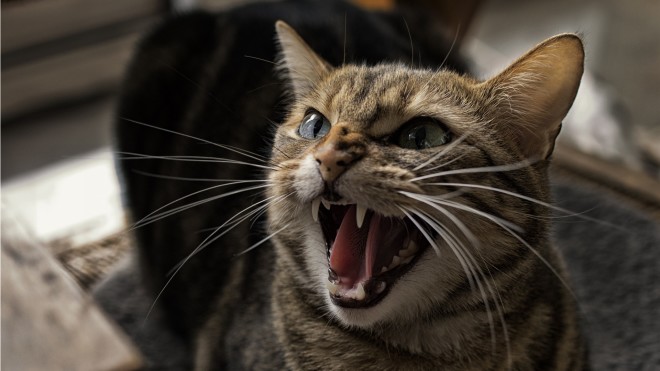 At the moment of fright cat may also behave in a hostile and biting. This kind of attempt at self-defense, as a result of which the pet is not even planned to harm the host. To bring the animal back to normal, it should get rid of the source of fear and try to calm him down.

Unfriendly behavior of cats can cause even extraneous odors, as the cat has a very sensitive sense of smell. The smell can be brought from the street on the clothing or caused by the presence of other cats nearby. At such moments, the cat instinct is triggered. Since the cat can not attack an invisible opponent, it can redirect the aggression on a nearby object, which is often a person.

The best way to solve this problem is to find the causes and elimination of stimuli. If your pet is such a reaction to other cats, to block him from the windows. Limiting the review, you'll be less pet provoke aggression. 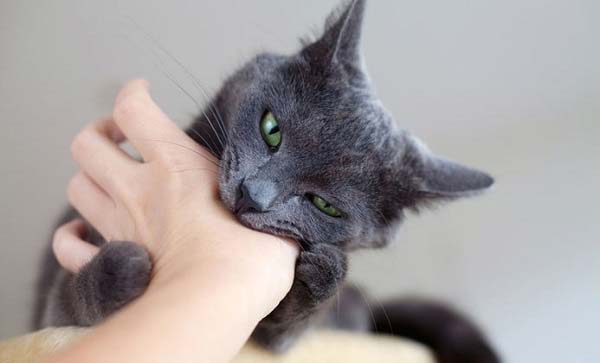 To eliminate annoying odors from clothes and shoes to use special sprays that mimic the smells of cat pheromones. They will help to calm down the animal and bring it from the state of stress.

Other reasons causing the cat aggression

Pets may begin to bite because of the motion deficit. In the four walls of the cat, sometimes hunted becomes the owner. In this situation, should be offered to the cat more active games. Suitable even a candy wrapper, tied to a string, more importantly, make it a new target for attack.

Cat necessarily should have its own space, where he can relax, correct emotional state and feel safe.

In some cases, aggressive reaction cats simply get up and leave, thus showing that you are unpleasant such games. Lack of attention will make her stop biting.

When you pull up at a sting hand, instinct tells the cat that mining should try to escape, then it begins to gnaw you stronger. To ease the sting is worth trying to push a hand toward the animal, causing confusion.

Continuously raising your pet, you will surely achieve good results.