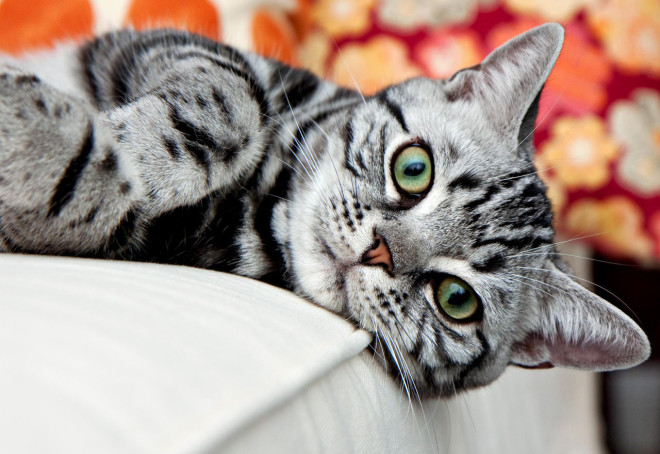 This cat breed is native to the United States. She appeared there several centuries ago, supposedly, it brought the Pilgrims on the Mayflower. Despite its long history, it has become recognized standards only in the early 19th century. Such cats are often to be found on farms and ranches, where they fought with great rodents. These conditions are very hardened American Shorthair, and over time this breed of cats has become an independent, stable, strong and healthy, passing all these qualities from generation to generation.

The first American Shorthair was registered in 1900, but in fact it was a cat breed British Shorthair named for Bally, whose color was red marble. After that, in 1904, it was registered by the American shorthair cat named Buster Brown, the color of which was smoked black. That he was the progenitor of the breed.

In the interval from 1966 to 1985 this breed was registered as a domestic shorthair. Currently the breed American Shorthair stabilized and only purebred cats are allowed in breeding.

Head - the width of which coincides with the length of the muzzle is shaped like a square. Well developed chin, cheeks. The forehead is slightly rounded, straight nose, wide. Clearly noticeable transition from forehead to nose. The neck is long and thick.

Ears - normal size, set well apart and wide at the base. Are clearly parallel. The ends are rounded, are possible brush.

Tail - a medium-length, thick at the base, tapering to an end.

Wool - a relatively thick and dense, with good undercoat. Short and glossy.

Color - is open to all kinds of colors, except chocolate, lilac, color-point, cinnamon and fawn. The nature of this breed of cats is usually a pleasant and relaxing, they are perfectly adapted to other animals, very friendly, even with dogs. The American Shorthair are very intelligent and affectionate. They are very fond of his master, but do not require constant attention. They love to chat, easy to learn. These cats are very independent, and this treasure. They do not like to take them in his arms and squeezed, however, they are very loyal and loved-up. Also, these cats are very active lifestyle, have a constant demand for games, while entertaining themselves.

They have well-developed instincts, including hunting. They love to catch mice.

American Shorthair like height, it is not surprising to discover their pet in the highest places in the house - on the cabinet or bookshelf. They are very flexible, can lie all day, watching what was happening.

This breed is not a demanding cats, voice they serve is very rare, but when they do it is imperative. Usually they are just slightly open mouth, very quiet myauknuv. This treatment will be enough to host the expression muzzles pet understand what he wants. In general, these cats are intelligent and cleanly. 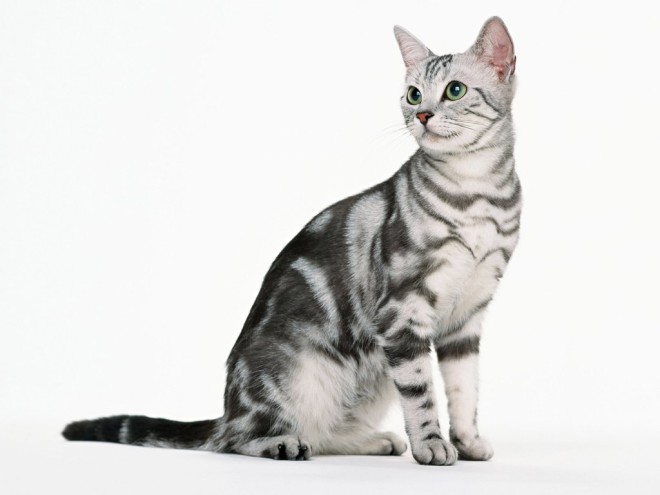 In the care of these cats are unpretentious. Having a short smooth coat, they need brushing only once a week. moulting period in autumn and spring will require increased frequency of this procedure twice.

One of the key moments in the care of the American Shorthair is to control her weight. They love to eat well, so it's important to make sure that the cat led the most active, burning calories all dialed. They should be from childhood accustomed to physical education as an encouraging it. Often, these cats can suffer from obesity. Normal weight for them in adulthood is 4-5 kg ??for cats and 7-8 kg for the cat.

This breed can boast of good health and great endurance. They live a relatively long time - 15 years or more. However, they have in addition to the propensity to obesity, there is also a predisposition to hypertrophic cardiomyopathy. This heart disease is hereditary and often occurs in other breeds of cats. It can cause the death of a cat at an early age. Among the hereditary diseases frequently observed defect in the hip joints, causing pain and lameness in the animal. Often found kidney disease - polycystic, who started form is complete failure of this body.

In comparison with many other breeds American Shorthair kittens are very inexpensive. When buying animal "with hands", you give him 5 to 7 thousand. If you decide to take a kitten from a nursery, be prepared to pay more than 20 thousand rubles, depending on the class and level of the animal. The cost depends on the sex pet - cats cats are usually more expensive.