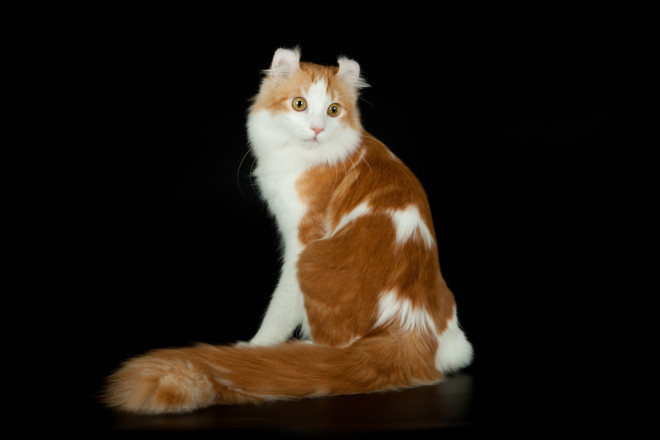 Like some other modern breeds of cats, American Curls are the result of random mutations. The first cat of this breed named Shulamith (it means "black but comely"). In 1981, she was very young kitten came to the house of their future owners - husband Joe and Greys Ruga living in Lakewood, California.

The cat ears were curled back, and after a while she had her kittens, too, with such an irregularly shaped ears - mutation was resistant. Felinologists conducted a series of genetic studies and recognized a different breed of cats, calling it the "American Curl" since Curls have become extremely popular in the states. Moreover, in just three decades, these cats could be a national treasure that Americans are very proud of.

In other countries, this breed is extremely rare because the breeders are not too willing to "let go" of the breed outside the United States. Moreover, despite the very high value of the kittens, which ranges from 500 to 4000 dollars. The price of the cats at the same time more than on cats. In Russia, for example, the first intact male cat of this breed named Marfik was introduced only in 2000. It tells its owner, it cost her considerable strength, nerves and money. The first in Russia opened a fan club "Russian curl" of this breed, which has repeatedly marked at international exhibitions, including in the US, where the typical American cat from the "wild" Russia has received the recognition of the jury. Now in our country, according to some reports about a dozen such clubs.

The name "curl" the cat got from the English "Curl" - "curl". Only correctly pronounce "kel", and in Russia in the name wormed extra letter "p".

American Curls are of two types - short-haired and holders of half-length coat. The color of the breed standard allows for all. Representatives Curls medium in size and well-built. Wool cats soft, silky, but not fluffy, and close to the body. The collar and the tail of a long-haired representatives must be lowered down.

The eyes in the form of slightly elongated oval, slightly slanted. Eye color may be any. Only in cats with the color "color-point" standard allowed only blue eyes. Ears are broad at the base, rounded to the ends, and are bent backwards at an angle of 90 to 180 degrees.

Despite the strange and funny look, which gives the cat ears, curls Curls representatives have the character of a very intelligent and friendly.

This cat is a companion - affectionate, playful, clever. And it is extremely interesting - it follows the master everywhere, "helps" wash dishes, do needlework, read on ... In short, I would not have come from the owner of the cat right there. 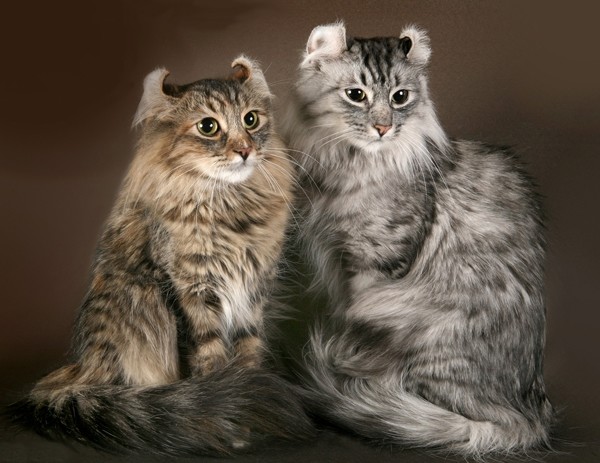 Even as adults, do not lose Curls childish spontaneity and playfulness inherent in their nature. Curls gladly take a direct part in the games of children and get along very well with other animals. But these cats alone absolutely can not stand, they are very attached to the man.

There were cases when these amazing cats relieves children with mental disorders, became their best friends and help in social adaptation of children.

Care Curls and their health

Lifespan American Curl - about 18 years. Genetic predisposition to any serious diseases have been identified. The only weak point of these cats - ears. They are quite delicate and easily damaged. Therefore, if a family has young children, you need to ensure that they are not squeezed cats behind the ears. In addition, once every two weeks is necessary to inspect the animal's ears and rub them soaked in lukewarm water swab.

Curl bathe once a month. After that, it is necessary to cut the claws, as if they vrastut, it will cause the animal pain. Moreover, scratching is not a solution - unless it will save your furniture.

Comb the animal if and only once a week. They have weak undercoat and a silky coat texture, so it does not fall down.

To Curl feel comfortable in the house or apartment, it needs its own area, and favorite toys. Generally, these cats love big spaces and long walks with the owner.

Curls need quality and balanced nutrition. According to experts, it is better to use a feed super premium class. And suitable for both dry and wet food. In addition, cats should be permanent access to water.

American Curl is quite small. In the year, even in the most solid clubs born to 200 kittens. So, for example, the first breeder Curl in Russia reported that in most large American feline federation, which is the founder of Curl, born in 1999, only 160 kittens, and in 2000 - 185. The woman remembers how much work was worth it to get kitten. She is the breeder of animals was subjected to a very severe test.

In the United States among both women and men, have proliferated T-shirts with the words "I love my American Curl."