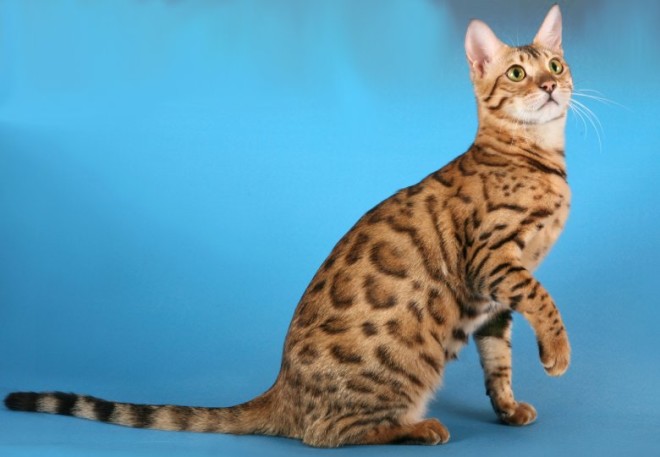 If you like true hunters with a friendly and gentle nature, the Bengal cat will be for you a real discovery. Representatives of this breed get along well with other pets. Bengal cats are not only not afraid of large dogs, but also able to make friends with them. These domestic carnivores have a great sense of territoriality, whereby they can even entrust the protection of home.

You'd be surprised, but the Bengal cats are very fond of the water. They are happy to play in the bathroom, can take a shower with his master and did not resist attempts to wash themselves.

Bengalis - a real wild predators, fated to become domesticated. Because their ancestor was an Asian leopard crossed with domestic cats. Bengalis not only meow, they emit a pleasant specific sounds, resembling the barking of dogs, the chirping of birds.

His appearance in the world of Bengal cats are obliged biologist Dzheyn Mill from America. While in the Far East enjoyed extraordinary popularity not domesticated members of this wonderful breed. Having been on a business trip in Taiwan, Jane was subdued these beautiful cats. It appreciated natural grace and beauty of these predators. However, she was outraged great interest to these beautiful animals from poachers and sellers. Because of their cruelty Bengal cats were on the verge of extinction. They killed indiscriminately for expensive fur. Kittens of this breed are sold as souvenirs of their fate in most cases was quite deplorable.

Dzheyn Mill has brought home one of these poor kittens. In Bengali immediately I began to manifest the character of the wild hunter. It was felt that the animal feels bad in a city apartment. However, the cat is perfectly in contact with people. At that time, Jane has lived housecat. Bengal cat quickly made friends with him. As a result, Bengal cat gave birth to a kitten home with color, similar to its own. Unfortunately, the life circumstances do not allow biologist to continue the experiment with breeding new breed.

After 15 years, Jane accidentally learned that during the research scientists involved in crossing various wild cats with domestic. The experiment involved and wild Bengal cats. Jane immediately contacted these scientists to provide it with a few kittens from the Bengalis who have been the result of this experiment. This was the beginning of breeding the breed as we know it. 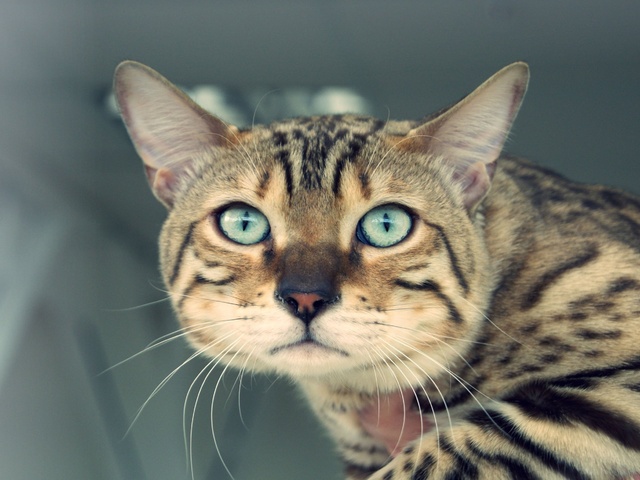 In the course of removing rocks encountered various difficulties. For example, each far Bengal cat was ready to strike up a relationship with domestic cats. Unfortunately, the male kittens born by mating, proved fruitless. Cats of the first two litters in nature did not differ from their wild ancestors. By the fifth character of the animal litter acquired the signs of domestication, but external data have changed as much in the direction of domestic cats. But these circumstances have not prevented Jane achieve the desired result. Already in 1987, the result of Jane - Bengal house cat participated in the exhibition. In 1991, a new breed received official recognition. Current leopard cat has elegant marble or mottled color and surprising nature.

To date, the Bengal kittens domestic cat in Russia are quite expensive.

Bengal has a unique intelligence representing an equilibrated mixture of instincts and adaptability. Their minds retained the flexibility inherent in a wild predators. They are characterized by cunning and high capacity for unconventional thinking. In addition, these cats are trainable. 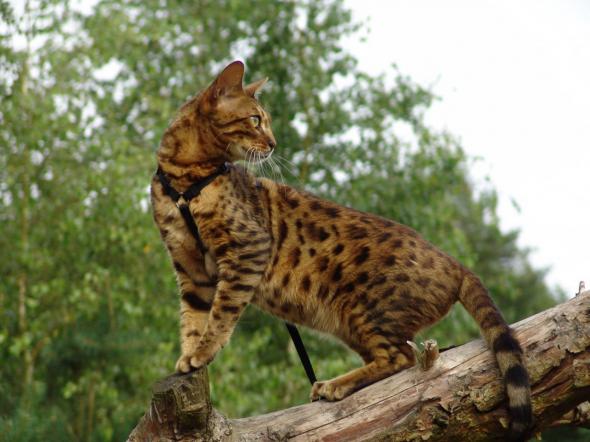 Domesticated cats in most cases do not reveal the full capabilities of their front paws. Usually, pets use them only for walking, games and fights. But Bengal cats are capable of more. They are using the front paws can beat the flying objects or carry anything from one place to another. This significantly expands their potential. Games and manner of hunting Bengal cats resembles the behavior of the boxers in the ring. This feature is characteristic of dogs rather than cats.

Bengal cats are extremely playful. They can bring their own favorite toys to his master. They clearly feel the mood of the person and try to help him, to distract, if the owner is something distressed.

But unlike an ordinary cat, it will be expressed not in murchanii on his knees, and in an attempt to engage in active person provocative games.

Outward signs of Bengalis are more like their wild ancestors. But their peculiar nature livable, social activity and softness. In addition, they have a very playful disposition. These qualities have been given increased attention in the breeding of this breed of cats. Of breeding cats were removed, whose character differed fearfulness, aggressiveness or antisocial. 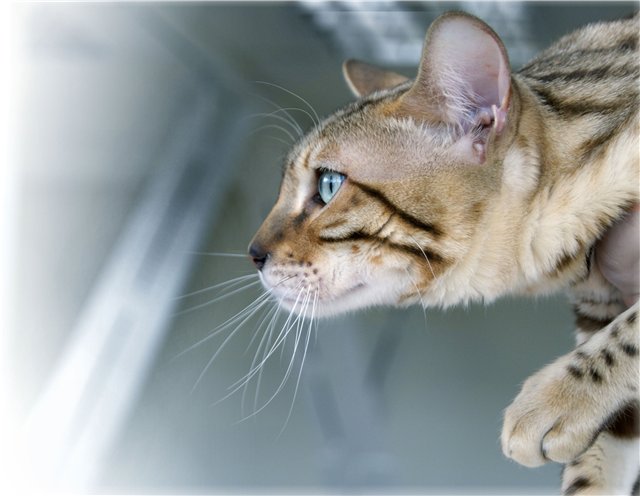 Current Bengal cats differ wayward and independent character. These cats have a great capacity to adapt to new conditions and perfectly amenable to training. Bengalis are very attached to their owners. They get along great with other pets and children. They are characterized attributed to the dog's ability to protect its territory. They monitor the safety of the house and warn their owners of the threat.

Bengalis are very unpretentious. Due to the fact that these cats short hair, she does not need enhanced care. Suffice it a couple of times a week, gently comb out the fur soft rubber brush or a special glove.

These cats shed almost invisibly and very fast. During this period, comb your cat should be a bit more often.

Bengal cat claws need to trim twice a month for two - three millimeters. With a cotton pad is necessary to clean cat ears as needed. For the weekly cleaning of the teeth should be used special bones or toys. You can apply a special paste to flavor fish or meat. 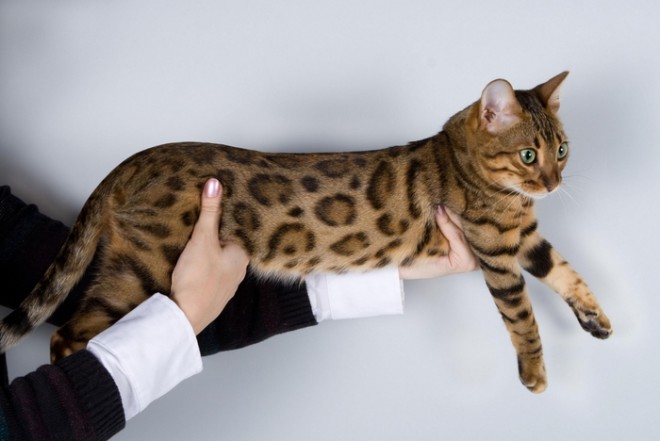 Bengal cats are very fond of water treatments. They are able to play with their own running water from the tap or shower. Thanks to this bathing of cats is not a problem. However, Bengalis should bathe only when absolutely necessary. You can only use a special shampoo to wash cats as "human" is able to dry up the skin and damage hair. Tray for a cat to be a pretty roomy. It is recommended to fill the ecological materials.

What to feed a Bengal cat

The basis of the diet of the Bengal cat should be rabbit meat or beef. By-products can be given only boiled and in limited quantities. Once a week you can give your cat boiled sea fish. In order to diversify the diet Bengali, it is possible to give children cottage cheese with no additives, yogurt and heavy cream.

One-quarter of the daily diet should be vegetables. Bengalis eat carrots, tomatoes, bell peppers, cucumbers. If the owner prefers feeding Bengali specialized food, it should be noted that such food should be given 3 - 4 times a day. It is imperative that any cat food was supplied at room temperature.