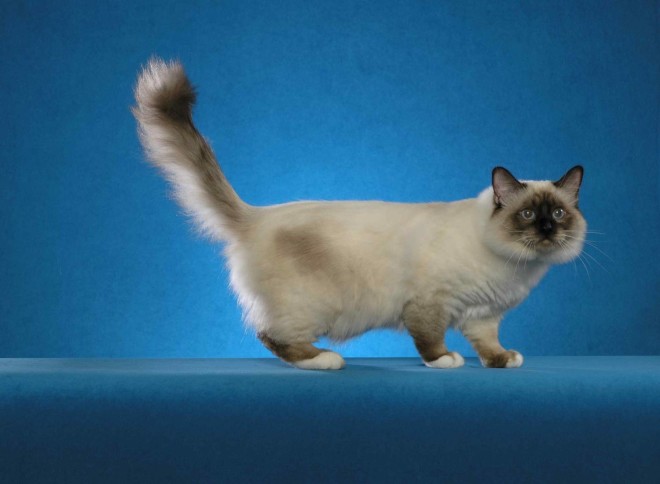 Amazing and mysterious breed Burmese cats. Her ancestors lived in the temples of Burma. They were considered real partners for local monks. These cats represented the temple guarded by local peace and holiness. There are many legends about how this cat breed rescued from the churches of the armies of the enemy invasions and fires. No wonder the second name of this breed is the "Sacred Birman".

Burmese has an amazing color, which it owes its genetics. According to one version, these cats received their white paws and a very soft fur by crossing Persian and Siamese cats.

At the moment, the Burmese cat breed characterized by chocolate, blue, brown and purple markings.

These cats are characterized by their tranquility and simplicity. They - the ideal pets for everyone. Burmese cats are able to provide invigorating effect on the phlegmatic and choleric soothe.

Burmese cats breed owes its existence to the crossing Persian cats and Siamese breeds. The most characteristic features of these beauties is very fluffy fur and color typical of fragmented faces and limbs.

According to the most common version of this cat breed first appeared in Europe in the early twentieth century. In 1919, a representative of the family of US billionaire Vanderbilt purchased several kittens of this breed of water from the eastern countries. He spent a huge amount of them, equal to the average budget of the enterprise. Grown-up kittens brought his first offspring in Nice.

But there are different versions of the Burmese breed. Perhaps it was the result of the work of breeders from France. 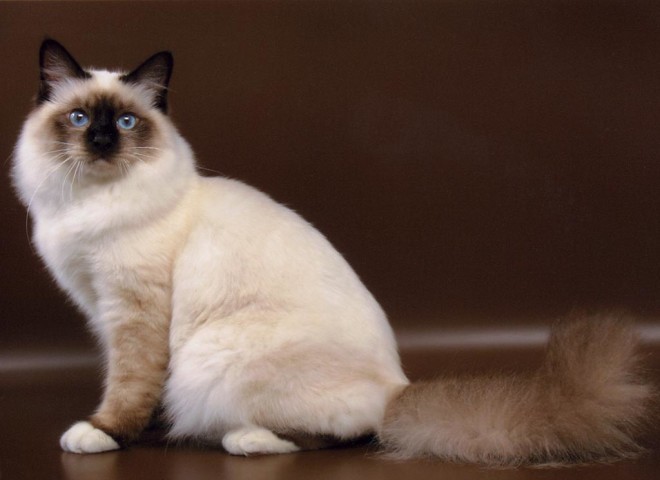 The Burmese cat breed was officially recognized in 1925. But despite its age breed, these cats are rare. At the end of the Second World War in Europe, there are only two members of this wonderful breed. In 1945, work began on the revival of this beautiful breed. For this purpose as the surviving representatives of the breed, as well as Persian and Siamese cats. According to the results of this hard work professionals able not only to revive the breed Burmese cats, but also to improve its performance.

After the Second World cat breed of Burma began to rapidly gain popularity in the US, UK and Europe. An interesting fact is that this breed kittens are born white, and only to six months they appear characteristic spots.

Legend of the Burmese

Legend has it that in ancient times, many Buddhist temples were guarded by the amazing white cats with very fluffy hair. In one of these temples was a statue of the revered goddess. In the statues were stunning eyes sapphire hue. When the temple was a lot of cats - the guards, who were led by the largest cat named Sinh. This cat was a favorite of the chief monk Mun Ha. But once on the temple was attacked. Burglars dreaming to steal valuable statue of the goddess. They almost succeeded, but at the last moment there was a scream tearing the soul. C?te Singh stood at the head of his ozhivshemu owner. cat fur has got a golden color, and his eyes glowed with sapphires, like those of an ancient goddess. Paws is a brave cat turned white, as if gray strands of his master monk. This sight made the robbers throw their prey and hide in fear. After that, the cat has 7 days did not go to the head of his master, and they died at the same time at the end of the week. Their souls went to heaven. From that moment all the temple cats became enjoy the golden hair and sapphire eyes. 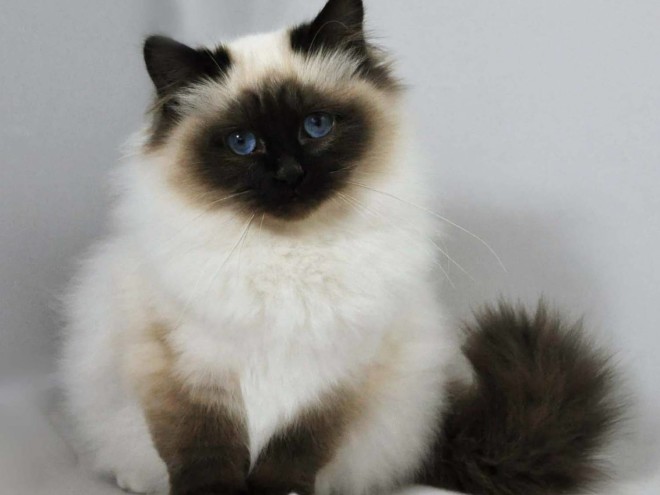 The nature of Burmese cats

Dogs of this breed is distinguished by an inquiring mind and a high uptake. They have the talent to memorize human words: they can be taught to some teams and names of objects. Not for nothing they are credited with a sacred past. These creatures are very finely and accurately feel the mood of the person. They are well aware that the game can not produce claws.

These amazing creatures possess tact and good "education." They are moderately active and very unobtrusive. These cats are patient enough and prefer to leave quietly and not show aggression. Therefore, they can easily start even with small children.

It is worth noting that the cat breed of Burma do not like loud noise. Perhaps influenced by their Buddhist past. By loud shouts and the music these beauties try to hide. These cats are very curious and will not be difficult for them to study the highest shelf, or jump on the cabinet. 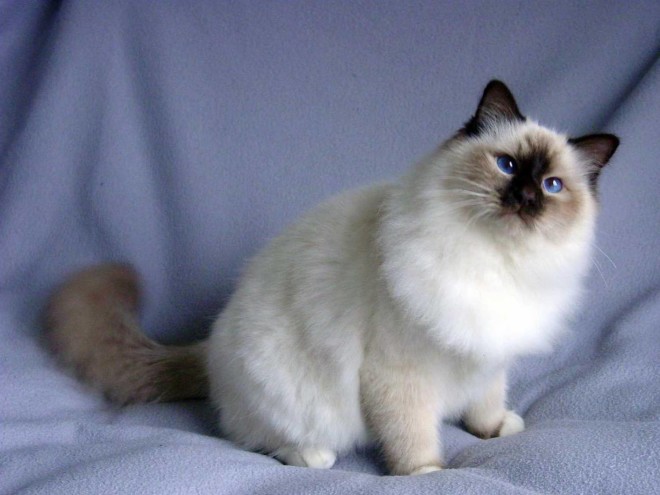 In spite of its chic appearance and storied past, these cats do not require special care. They need only comb twice a week. These cats do not tend to gluttony. They can leave any number of food and not have to worry about overeating. The food cat breed Birman quite whimsical. They prefer natural food and rarely agree to have special feed. These beauties diet should consist of fresh meat (not pork), poultry, fish and dairy products.