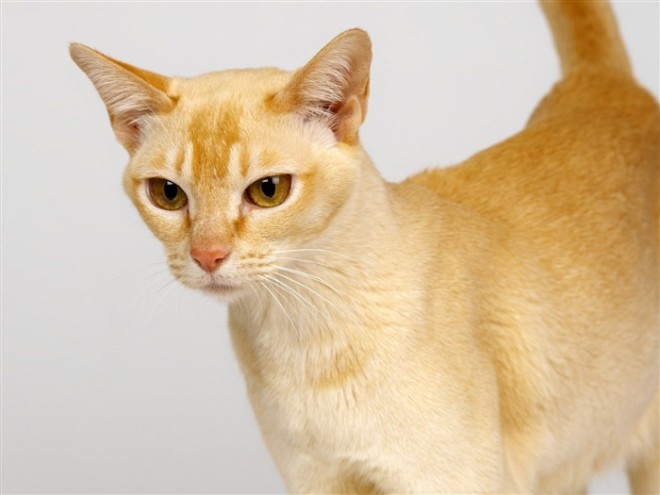 Breed Ceylon cats appeared in Italy, but the original is considered to be the birthplace of Sri Lanka. Italian Paolo Pallegatta noticed on the island of these beautiful animals and took a few representatives to their homeland. After that began a large selection work on deducing of this breed. Only after some time there was a recognized standard Ceylon cat. In 1980 Ceylon cat has received official recognition of the International Federation of cat lovers. After that, the breed began to quickly gain popularity and soon conquered the whole of Italy. There even appeared a special club connoisseurs of this magnificent breed. Currently Ceylon cats are very popular all over the world. However, in Russia, these cats still not widespread.

Ceylon cat characterized by its miniature. These pets are very mobile and very graceful. They are easy to go on contact with all the people are calm and docile nature.

The body of Ceylon cats very graceful, but it has strong muscles. Small head with almond-shaped eyes and nose of medium length. Ceylon cat has a large, close-set ears. These cats are distinguished characteristic coat color - pronounced M-shaped pattern on the forehead and striped legs and tail. Such a beautiful brindle and made these cats extremely popular. Most often, these cats have a characteristic golden color short hair, but there are also cream, peach, tortoiseshell and gray. Fur of these cats is quite thin and silky. Forepaws Ceylon cat slightly shorter than the rear.

Ceylon cat differ very outgoing and active. They are very friendly and get along well with children. In addition, they tend to very much attached to his master.

Ceylon cats do not like loneliness. If the owner is not possible to give sufficient attention to your pet, you are likely to find a Ceylonese other entertainment that might not be quite so harmless. If the owner does not have enough free time to play with your cat, then the best solution is to have another Ceylonese. Ceylon cats get along well with any other pets. These magnificent cats differ tenderness and kindness. But on occasion, they do not allow themselves to insult. They are always ready to communicate with new people.

Ceylon cat breed is very in need of attention and love. If the owner would leave them too long, Ceylonese start to miss, miss and even sick. They badly needed a companion for games and socializing. Cats of this breed will welcome the presence in the house of other pets.

Ceylon cats tolerate travel and change of residence without any problems. They are very quick and easy to adapt to new conditions. In addition, they are sufficiently resistant to stress. These cats are always glad to new acquaintances, and they can be safely let out on horseback suburban areas.

Ceylon cats practically important the size of their property. They thrive even in small urban apartments. They have a high degree of adaptation and adaptable to any environment. 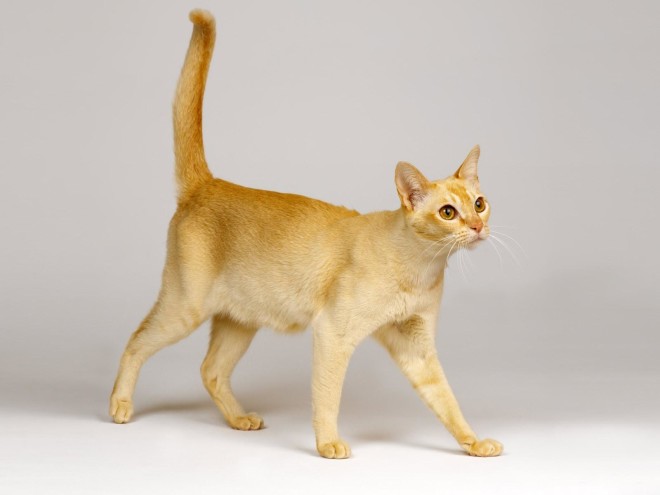 These pets are quite undemanding in care. Their short coat does not require frequent scratching. It is enough to comb her one - two times a month. Sometimes cat ears should be cleaned with a special solution. Ceylon cats rarely get sick. The only thing they are afraid of - it's cold. No genetic predisposition to any disease is not detected in these cats.

The Ceylon cat feeding rules apply. Avoid too much fatty food. Meals should be moderate and balanced. The basis of the power of these cats must be either a specialized food premium or beef, rabbit. Variety of food can occasionally boiled fish without bones, no fat curds with no additives, yogurt, eggs. You can give the chicken and turkey meat. The cat should always be freely available fresh water.