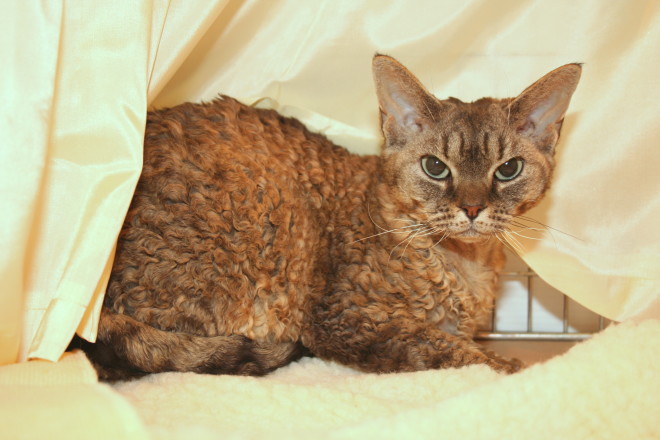 Devon Rex - breed of cats, which is popular all over the world. His appearance resembles a fairytale character, such as an elf or a fairy. The cat you do not mix up with another breed. It has a low-set ears in the form of a butterfly's wings, light almond-shaped eyes. At night, the head of the animal resembles a bat.

Fans of fantasy and fairy tales are obliged to purchase the animal itself, because the history of discovery of this species in itself makes me think that this kind of cat is not out of our ordinary world. The cat for the first time found near an abandoned mine in Devon, where the woods and abandoned cave. This place is the home of the hobbits, trolls, pixies, gnomes and our Devon.

Devon Rex has a wavy, soft fur, big ears in the form of a butterfly's wings, almond-shaped eyes, which are in harmony with the color of your cat. The muzzle of wide and flat form. This cat has a slim, strong body heavy enough (e.g., 3-month kitten weighs 1.5 kilograms), the thorax broad.

Devon does not smell and virtually no fade, so this cat allergy is less common than other breeds.

Paws in our pet's long and strong with soft and round pads. Devon Rex has a mild pleasant voice. All colors are recognized.

Devons often compared in character and behavior with dogs and monkeys. With dogs, because they are as loyal, respond to his nickname. With monkeys, because the same playful, love to open their legs and chests different locks. 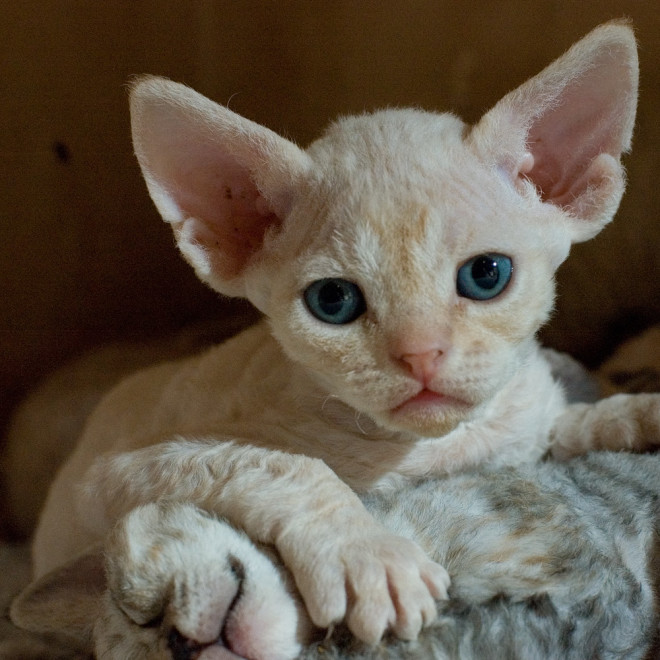 They are very fond of different toys, gloves, scarf, in general, all that "bad lies". These items will be for your pet its favorite toy, he will go all out to protect.

These funny animals like to climb in the cupboards, fridge, furniture, but since this noble breed of cats, they will not reset the pots of flowers from the window sill or cabinet.

Also, these cats love to sit quietly in the hands of the owner. If you have found a few of these animals, they can settle down on your knees all at once. Devon is well trainable. Generally, it is a very peaceful cat. They are very trusted by his master, so never let you get bitten or scratched. 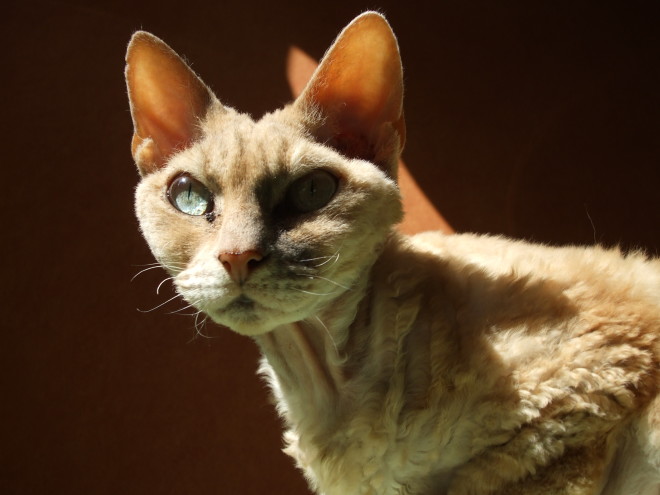 Also because of the sensitivity of incompatible blood group antibodies (but it was observed in very rare cases) in kittens can fall off the tip of the tail at the age of 1-2 weeks. To avoid such unpleasant consequences, you should not put the kittens to the mother of 1-2 days, and your kitten will be saved from destruction.

Because of his boundless trust to the owner, Devon Rex with dignity suffers unpleasant procedures such as grooming claws, treatment of diseases, bathing. It is believed that this type of hypoallergenic cats and supposedly they do not cause asthma, but it is not so easy in these animals a short coat that does not shed, so an allergic reaction rarely occurs. Also, these cats are good mothers, there were such cases, several cats were combined and took care of the kittens together.

In Russia you do not often see Devon exhibitions, as a breed these cats have rare. However, the number of kittens born is growing year after year.