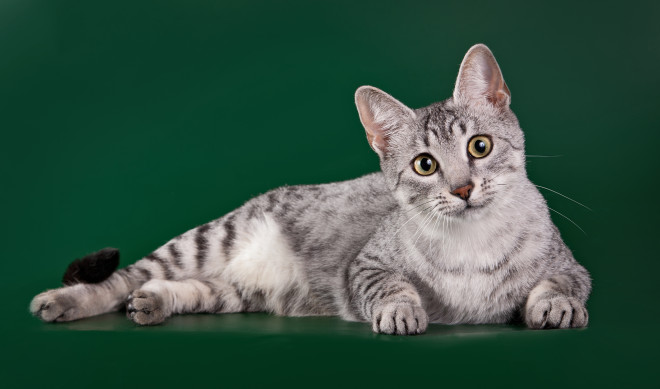 This breed of cat has come to us from antiquity. Judging by the images of these animals survived for three thousand years, their appearance has not undergone any significant change however.

In the culture of the ancient Egyptian kingdom cats occupied a very important place. She was considered a sacred animal, embodies the ancient Egyptian goddess Bastet, keeper of love and a home. As such, after the cats were built magnificent temples throughout the ancient kingdom. If the cat died, the family in which she lived fell into mourning, in case of fire it is a cat, not a jewel saved from the fire in the first place. If careless coachman carts to run into a cat, it could be stoned to death. After the death of the cat's body mummified and buried in special cemeteries.

For example, in ancient Egyptian settlement of Beni Hasan, archaeologists discovered a whole cemetery of cats, the number of graves in which more than 180 thousand. Animal mummies were placed in a sarcophagus of gold and silver, decorated with precious stones and a variety of precious stones.

Today the history of this breed begins more than a hundred years ago, since when breeders breeders from France, Switzerland, Italy started to restore this ancient breed of cats.

Tragically in the fire of World War II killed almost all the animals bred. However, fate would have it so that the restoration of the breed became interested in Russian princess Natalia Trubetskaya, who lived at that time in Italy. It made a record of their cats to the Italian association and FIFe branch, and introduced animals on the 1953 exhibition year. These cats have been made in the register of phenological Association, and the resulting progeny was the so-called "Egyptian line." In 1999, the last animal was brought from Egypt to Europe.

It is worth noting that the foundation of the modern breed of cat made, brought straight from the streets of Cairo and other Egyptian cities, the origin Ktorov covered with darkness, but this does not detract from the merit of the development and expansion of the gene pool of the breed Egyptian Mau.

Today, this breed of cats is closed. In European countries, the Netherlands, Italy and Switzerland until 1988 opened a total of three nursery. In general, in Europe very few nurseries involved in Egyptian, besides all the related origin. New animals to upgrade the gene pool, is very difficult to deliver. In the United States much more nurseries, but delivery cats because the Atlantic Ocean is a certain difficulty. This wonderful breed was recognized in CFA in 1977, and in FIFe in 1992. Each cat of this breed should be stamped to confirm its origin in the stud book. 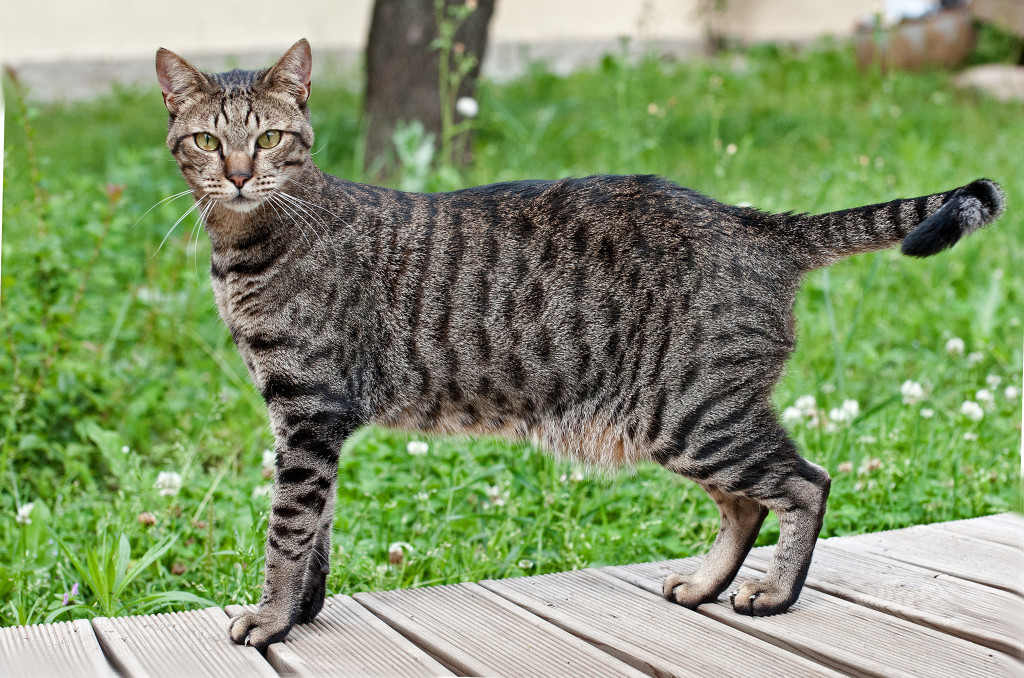 Typically, the average size of the ears, they are a little sharp, well placed, with a slight tilt forward and cover the head from behind. They are covered with short shorstkoy and may well have a brush like a lynx.

Eyes almond-shaped round, young gooseberry color. However, at the age of 8 to 18 months, the color can be changed to green. These cats look very unusual and expressive.

The head of the Egyptian cat is circular in shape with rounded podusnikami, blending smoothly into the cheekbones. Pinch is not observed. Jaws, especially cats, can be sufficiently pronounced nose - smooth. Profile rises gently from the nose to the top of the head, any pronounced kinks absent.

Torso of medium length and size. There is a small feature - the presence on the loose folds of leather abdomen that allows the Egyptian Mau to do a long step, and this increases the mobility of the animal. The blades are high, expressed well enough. Muscles are well developed. The average weight of a cat 5 kilograms, 3 kilograms of a cat.

Limbs of medium length, however, the hind legs slightly longer than the front. The back of the Egyptian cat looks exactly, due to the fact that the hind legs bent. Round or oval paws are usually small in size. 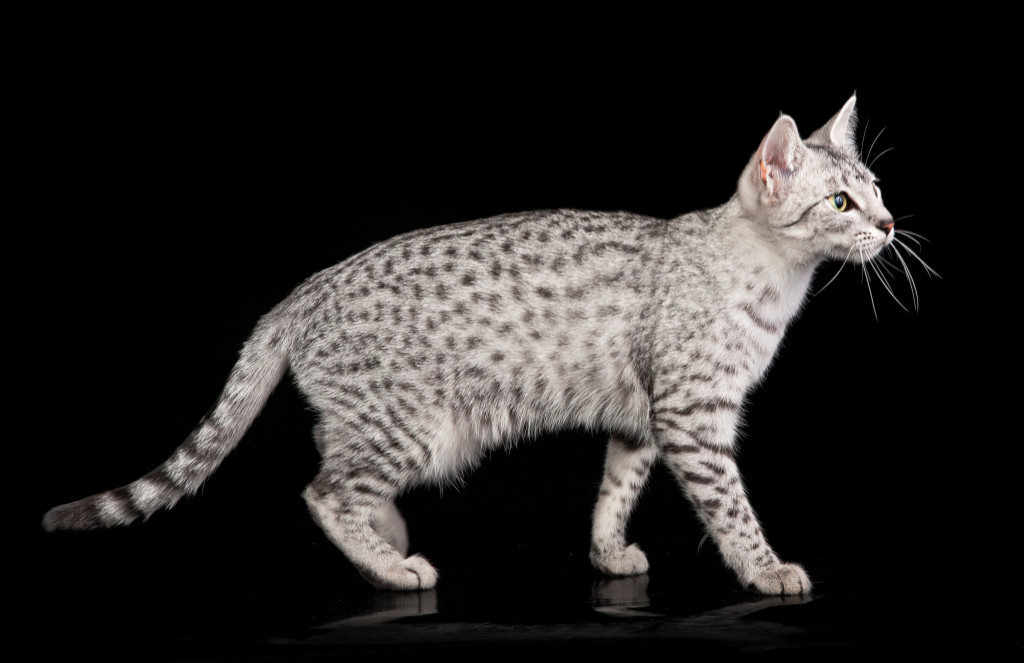 Tail medium length, with the thickness decreasing in a slightly pointed tip.

Occasionally there are Egyptian and black marble color. This color is called "wild".

Egyptian animal with a very loyal character, it will not talk to strangers. Very much like to participate in the life of the family in which they live. Close relationships are established with one or two people who are their best friends for life. These cats like to actively spend their time playing. They are very intelligent and curious. Owners should take care of if they have a sufficient number of toys. Otherwise, these active animals will make them themselves from the host of things.

These cats are excellent hunters can catch mice and other small rodents and birds. Really love to run, thus can reach a speed of 58 km / h! 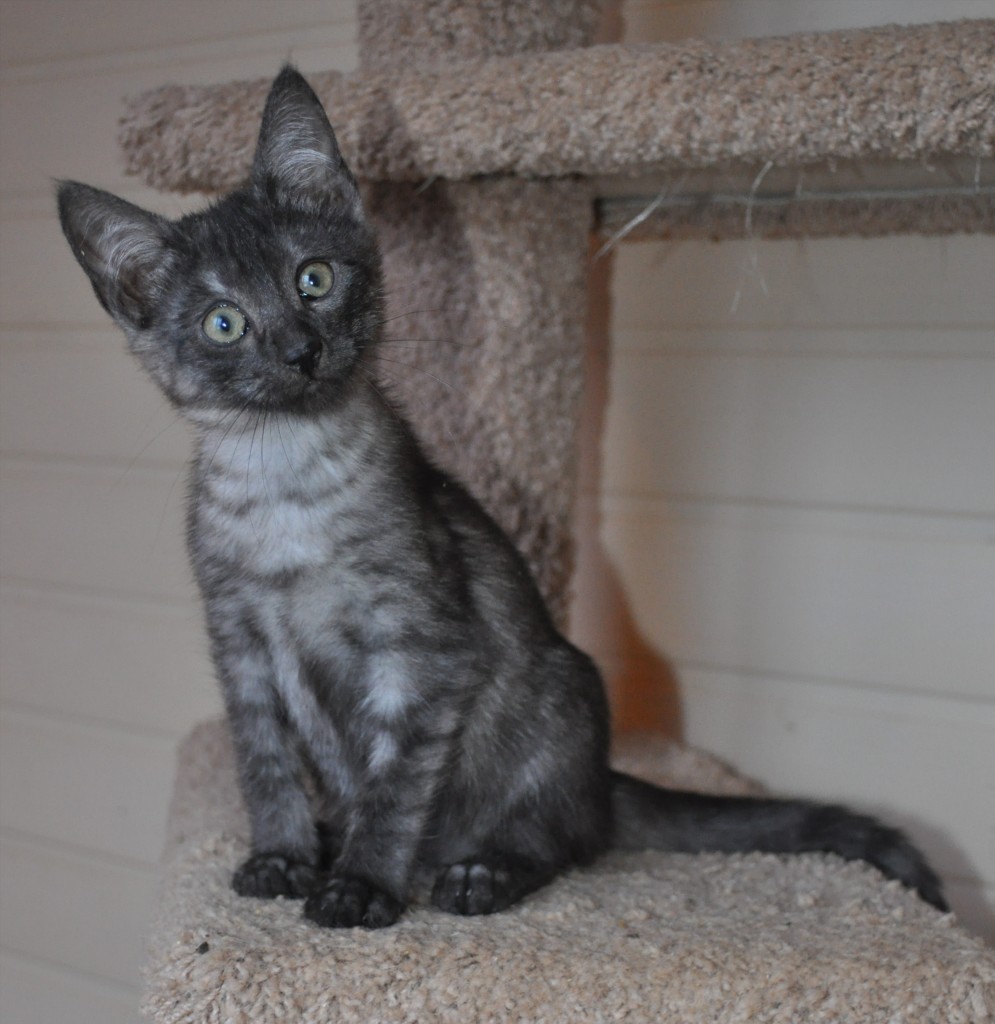 They constantly monitor their property and in case of loss will require the owner to return the item. Very much like to climb on the cabinets, mezzanines, shelves, easy to open drawers and doors. Most of these cats like water, may even play with it, to drink from the tap.

Since Egyptian wool short and she has no undercoat, then comb them do not have more than two times a month. Trim nails to gently, 2-3 mm from the edge, so as not to injure the sensitive part. It is necessary to monitor the purity of the ears, especially their inside. Representatives of this breed is easy to accustom to the tray. They love to walk and did not resist the leash, bathe with pleasure.

Mau peculiar diseases such as hypertrophic cardiomyopathy (heart disease), asthma, various allergies are not uncommon. The average age of the Egyptian Mau - 14 years.