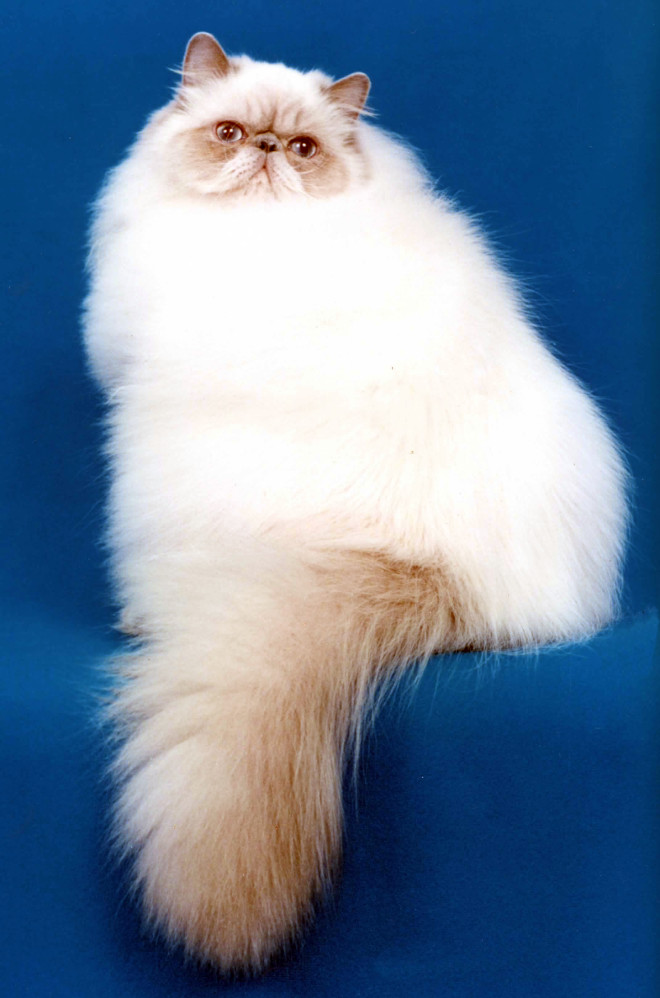 Its history, this breed dates back to the forties of the twentieth century, it was then in the United States by crossing the cats Persian and Siamese breed was obtained offspring with color, very similar to the color of the Himalayan rabbit, after which a new breed got its name - Himalayan cat. Offspring inherited lush shorstku from the Persians, and the extraordinary intelligence of the Siamese parents. Officially recognized the breed was in 1957.

Himalayan cat on a set of external features refers to the Persian type, with the exception of a larger body, and Siamese. The wool is very soft, thick and long. However, the most remarkable thing about them - is, of course, color. Beautiful silky shorstka unusually light color blends with bright markings on the tail, ears, paws, muzzle. The color of these marks, is finally formed with age and can be quite varied (although some colors are not yet recognized): dark brown, blue, red, red, purple, chocolate, blue, cream, lilac and cream.

In general, a Himalayan cat - a strong, stocky animal such as having low, but strong legs and large paws. The body is quite massive, with well-developed musculature. The size is usually large or medium.

Particularly noticeable in her appearance of a large, wide-set sky-blue or blue eyes. They give expression faces friendly and good-natured look. Those eyes, according to the owners of the Himalayas, have a certain magic, forced to watch them again and again.

By the nature of these cats aristocratic beings with a sense of self-worth. They love the attention and often require it from the owner. But with all of this is very docile, quiet, smart and quick-witted, well trainable. Love mobile games, but prefer to spend a lot of time with its owner. No matter what you do: cook dinner, bed tucked just relax with a book in their hands, these cats always make you and your company will not leave alone, because the man for them - the best friend. So remember - long loneliness adversely affects the representatives of this breed. 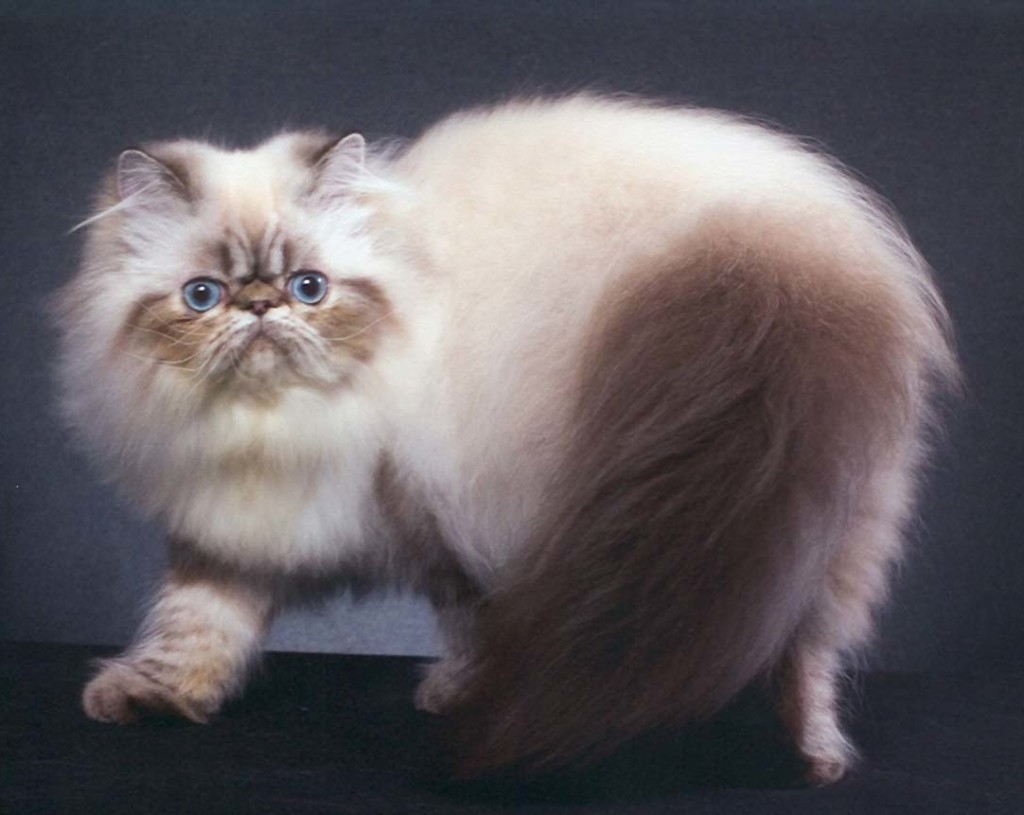 How to choose the kitten

In our country, the Himalayas have appeared only in 1986. Then we were introduced by a first purebred cat that gave rise to the Russian Himalayan cats.

Until today, buy a kitten Himalayan cat is only possible in nurseries or the breeder. This breed is extremely rare for our country, so it is unlikely to meet the sellers of the Himalaya in the underpass or on a bird market. Require the seller to provide you with the documents confirming the origin of the kitten, otherwise you can not be one hundred percent sure of any animal health or his breed.

Be sure to pay your attention to the conditions in which live kittens from a breeder. Place their habitat must be clean, ventilated, with an optimal temperature control and sufficient illumination. Kittens in any case should not be in the cells, they should have a comfortable place to sleep and rest, as well as a variety of toys.

There will also be out of place to look for at least one of the parents purchased your kitten. Conscientious and responsible breeder will never refuse to do so. Even on the contrary, gladly show them to you, tell us about all the achievements and merits, inspected the pedigree documents. In addition, looking at the parents of a kitten, you can understand how your pet will look like in the future. 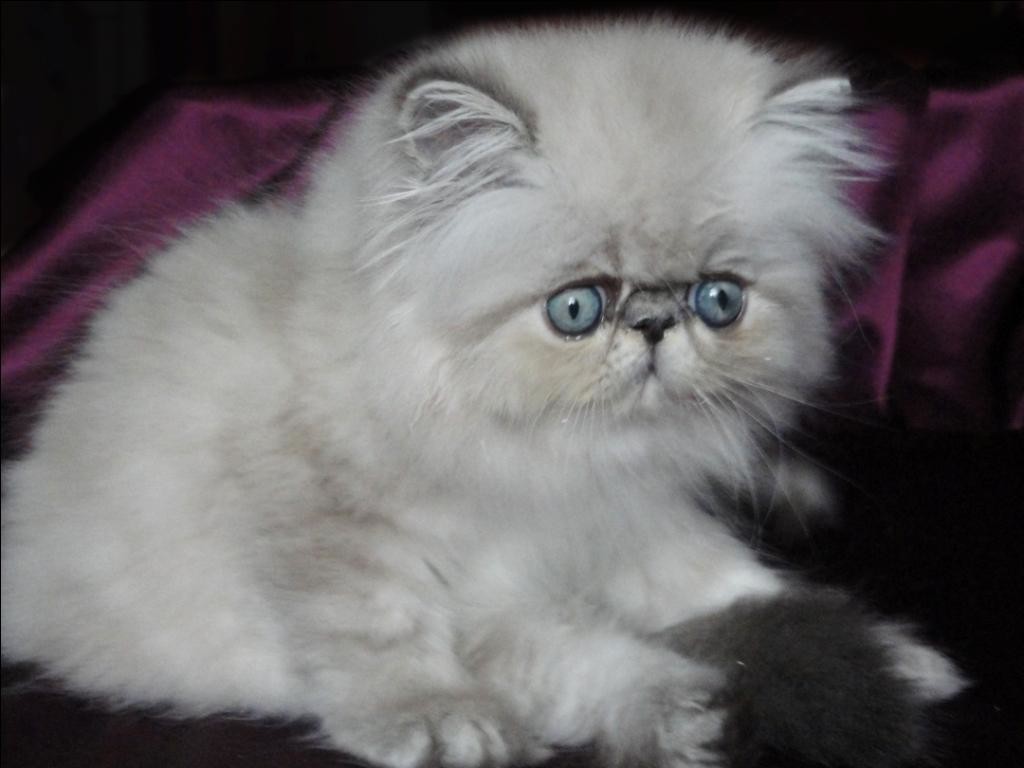 Remember that kittens can not take away from the mother until the age of twelve week old. they need to breast milk before this time. Also, they are not ready for a separate life with the owner.

Three - four month kittens Himalayas are very mobile, active and love to play with each other. Shorstka clean eyes and ears should not have discharge, no odor. Feel the belly of a kitten, it should be soft, the presence of the dense belly may indicate infection with worms.

After the kitten purchased sure that the seller has provided you with the following documents: a contract of sale, the veterinary passport and pedigree. The veterinary certificate must include information about the two vaccinations, the ninth and the eleventh week. Instead pedigree can give the card the kitten, which is exchanged for a pedigree in the club registered the mating.

Main requiring care in cats Himalayan breed - it is their long hair. To avoid tangles need to comb your cat daily. Water treatment, the representatives of this breed tolerate quietly. 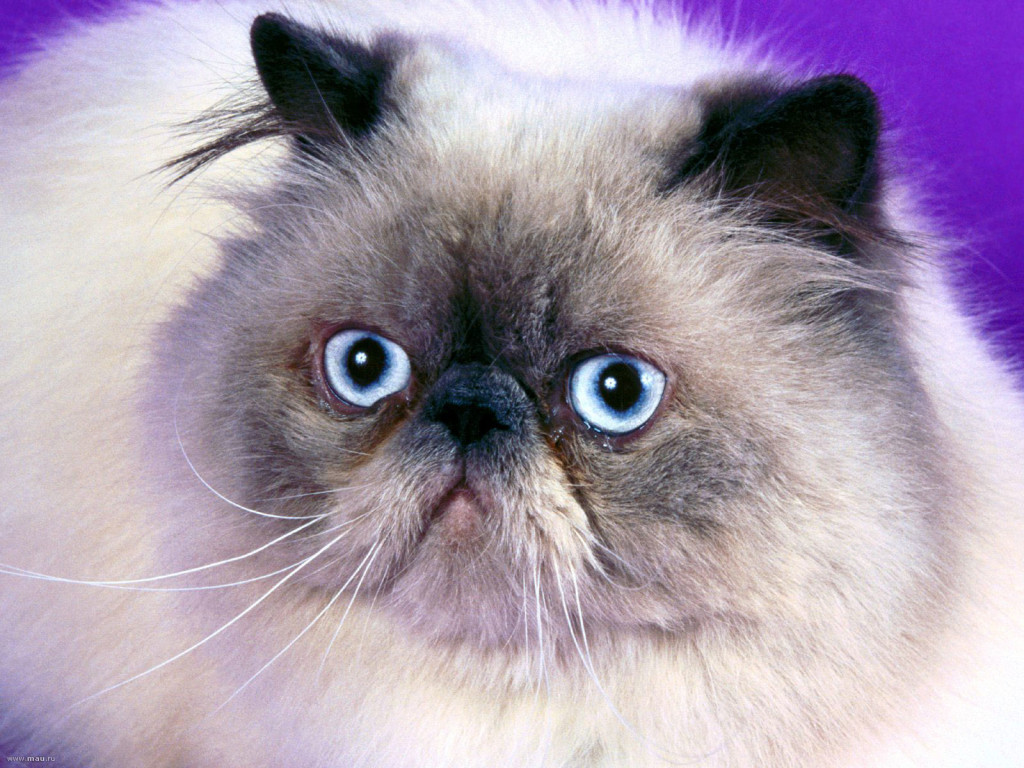 Also, every two weeks the cat is necessary to cut the claws. Do not be amiss to the presence in the house scratching posts, it will protect your furniture and wall from damage, and the pet will undermine their own claws.

Feed the cat better prepared feed containing all the necessary material for the development and growth of the pet. The feed can be either dry or wet.

Health Himalayas can be called good, however, with its own characteristics. The representatives of this breed, like Persian cats, the unusual structure of the nose, because of which there may be breathing problems. In particular, during the experience of stress these cats breathing becomes difficult. Also, increased watery eyes there.