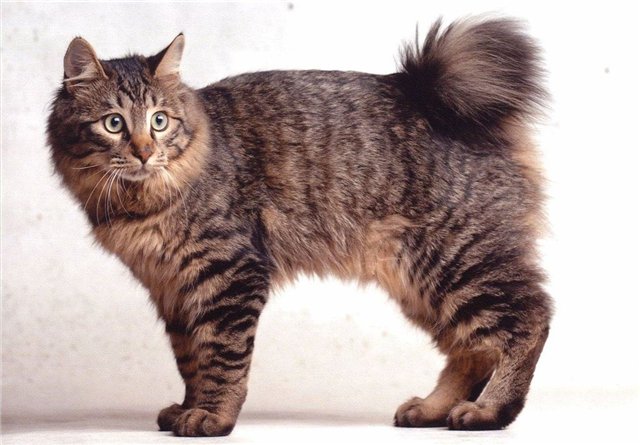 Karelian Bobtail - an unusual breed of domestic cats with different short little tail curved, resembling a round and soft pompoms. Karels well adapted to survival in the freezing climate Karelian backwoods, and in a city apartment. The place of origin of the breed considered expanses of Karelia and Ladoga. She was bred by Russian breeders on the basis of short-tailed native cats. Large numbers of people converge in opinion, that the ancestors of Karelian Bobtail are Norwegian Forest cats.

Only in the early 90-ies of the last century appeared the first official description of the breed. Unfortunately, it is not so plentiful and not spread in the world, but, despite this, the fans and the owners of the Karelian Bobtail love these wonderful cats. Recognized this breed only in cats WCF World Federation.

Body - strong and precise, muscular. Short straight body of medium size. Their legs are proportional, very sturdy and strong, hind legs slightly longer than the front, thereby creating a feeling that the rear part of the body slightly raised. Feet are round, small and gives the cat grace and gentility.

Head - small, shaped like an isosceles triangle faceted. The forehead is flat, almost straight profile, with a slightly pronounced shift to an equally smooth nose. Cheekbones are situated high up on the flat cheeks bulging pillow under his mustache. Narrow but sturdy chin.

Ears - vertical, large or medium-sized, open forward. We set high enough on the top so that the outer ear and side cheeks are arranged on one line.

Eyes - a medium-sized, oval-shaped, obliquely planted to the nose. Color from golden amber to yellow-green and emerald. It is important that the color harmoniously combined with the color of the coat. Less common are blue-eyed Bobtail. It is extremely rare to find a Bobtail with eyes of different colors.

Tail - all Bobtail is known to have short tails in the form of pompoms (from 3 to 13 cm), but Karelian, unlike the others, it is very flexible, agile and always upbeat tail. He may be right, but often curved. Hair on the tail is different from the hair on the body, it is much longer, so their tails are always compared with a pompon. 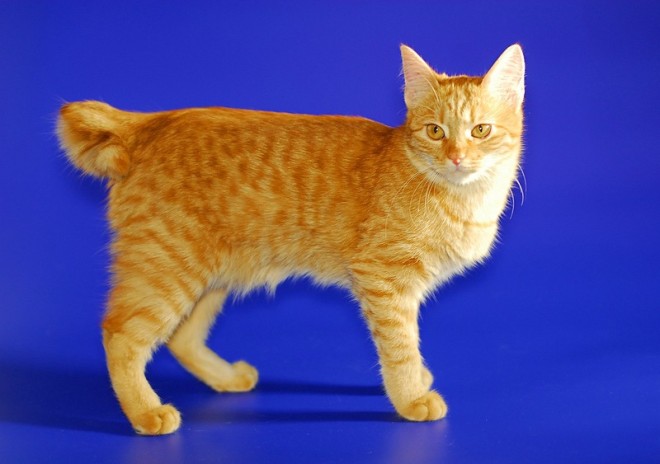 Wool - short or medium length, dense, with sufficient undercoat palpable. In healthy animals it is shiny and tight to the body, the structure of harsh. Many cats have a dense and long hair coat in the "collar" area "panties" and conspicuous tufts on the ears.

Colors - Avoid chocolate, lilac, cinnamon and fawn color (including a character color as the tabby, bicolor, tricolor), and colorpoint. All other colors are recognized.

Small, strong and graceful cat, slender, well-developed musculature. Distinguish shorthair and semi-longhair. These cats are very intelligent and active, good hunters. Crossing with other breeds is not allowed. Life expectancy - about 15 years. By weight are between 4 and 7 kg.

Karelian Bobtail - very friendly and affectionate animals. They are kind and sensitive, loves his home and owners. Not imposed, when you're not in the mood. These cats are not too quick to take offense, but rather othodchivy not vindictive. Most of them are attracted to the warmth and comfort, they are well adapted to the new environment, as well as dealing with new people, love children. Relationships with other cats living in the house, add up quite friendly, as in the wild, they used to live in small groups.

The main feature of Karelia is their amazingly thin and melodious voice. This distinctive sound is more like a tweet, for that German experts began to call them "tweet cats." 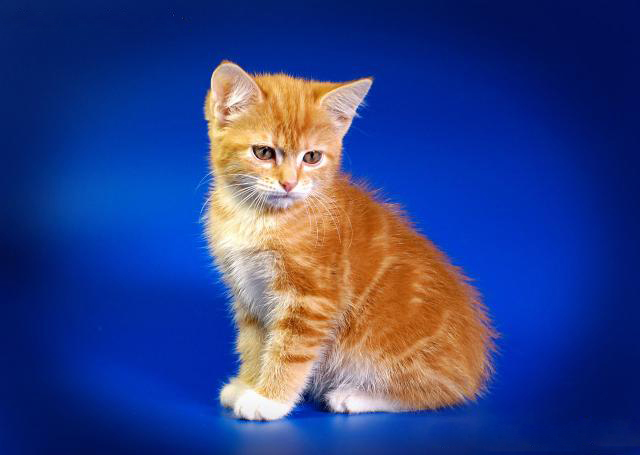 However, to hear them meowing rarely works, because they are very reticent. For them easier to approach and touch the human paw to draw attention to himself. Karelian Bobtail suitable hosts, not loving meow persistently and extremely sociable cats.

Karelian Bobtail is ideal for living in a country house, where they can walk freely on the street or to catch mice. They have excellent physical strength and full of energy. They have no hereditary diseases. Bobtail accustomed to the harsh snowy winters and extreme cold, because of their breed was formed naturally under extreme climatic conditions. But life in a city apartment does not make them particularly difficult. For them, it is noteworthy that in the spring of Karelian bobtail cats are never labeled with the territory, which is a big plus in the cat content.

Long-haired individuals should comb a special brush with a few teeth about once a week, and for the short-haired cat suit "stroking" special mitten, which collects fallen hairs.

Prices are individual for each cat or a cat of this breed, but generally range from 30,000 rubles per individual.