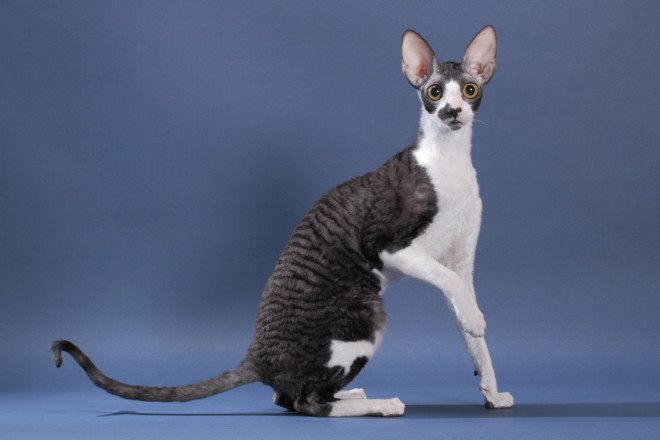 Cornish Rex - very unusual breed. It is considered to be one of the most elegant and bohemian cats.

For the first time this unusual breed appeared in the English county of Cornwall. It was here the first time was assigned so-called "royal" mutation. That it has become the main feature of the breed Rex cats. Very short wavy hair made the breed one of the most unusual in the world.

Cat breed Cornish Rex characterized by the absence of guard hairs. This is what makes her hair so soft and warm. Nature gave these cats exquisite relief astrakhan fur wave, which casts subtle pearlescent. This stunning beauty attracts the cat's coat so that its stroke.

But the amazing features of wool breeds of cats Cornish Rex does not end there. These cats have extremely sophisticated body structure. Due to the thin bone and long legs, these cats look very graceful. Sleek profile elongated snout with large "Egyptian" ears and eyes of stunning expressiveness produce a fascinating effect.

Many people confuse the breed Cornish Rex with the Orientals . This is wrong. There are significant differences between these breeds. They are distinguished by the shape of the head, the eyes, ears staging. Cats Cornish Rex look, rather than as a predator, but as an enchanted prince, a kind of fairy-tale creature.

Cats Cornish Rex may have a different color. There are even the owners of Siamese. The most common white asymmetrical pattern. This is not the big cats - their average weight is 3-5 kg.

The first Cornish Rex appeared in 1950 on a farm Miss Ennismore. It was a cat named Kallibunker. His hair due to mutations to get amazing ripple cats. Official recognition of this breed was in 1967 in England. Qualified these cats were in the US in 1979. And already in 1983, the breed Rex Konishi received standards in all existing feline associations. 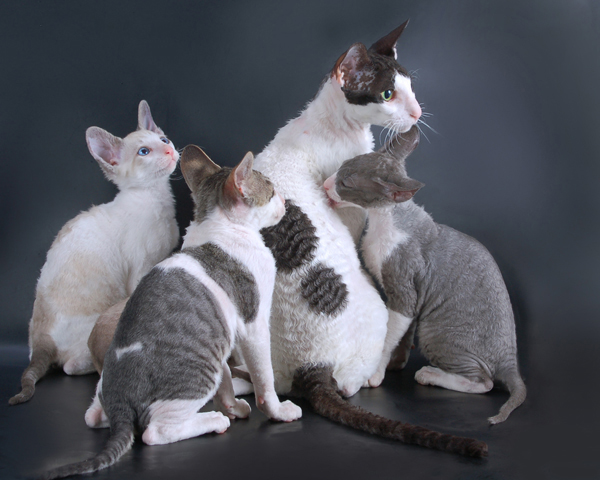 Curly hair for this breed is responsible recessive gene. This was the reason that, in order to avoid the problems associated with inbreeding, home and Siamese cats were used. In the process of selection of British Shorthair and Burmese cats were used. But then they are excluded from the selection. At the moment, it prohibited cross Cornish Rex cats of other breeds.

Cats Cornish Rex is extremely easy in the maintenance. This is one of very few breeds that never cause allergies in humans. These beauties do not sweat, as is characteristic of 'naked' cats, and do not shed as fluffy breed. The owners of these pets will never find their hair on your clothes or furniture.

Cornish Rex have excellent immunity and almost never get sick. In addition, they are very unpretentious in home detention.

Cornish Rex have an enviable intelligence. These cats are extremely intelligent and easy to understand his master. They are very much attached to his master and in need of his affection and love. It is important to the owners, and not the house in which they live. 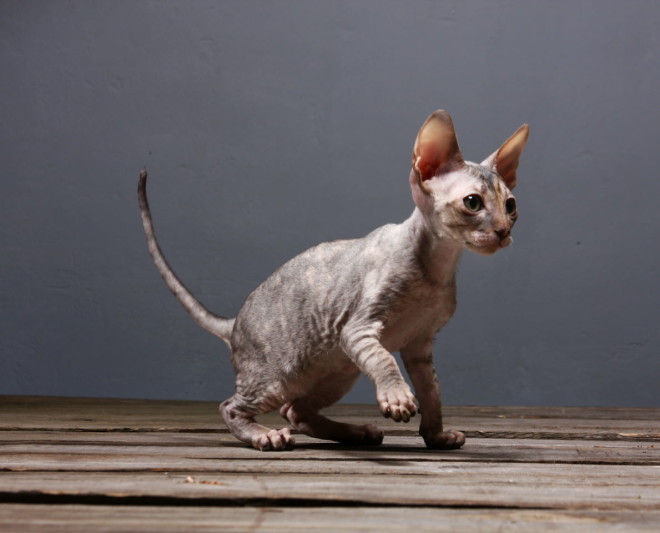 Cornish Rex peculiar extraordinary aristocratic behavior. They are true Englishmen, strictly follow the etiquette. Males of this wonderful breed do not mark territory. These cats never steal food, do not bother, and not imposed by the owner against his will. They are very noble and patient. These cats are not peculiar manifestation of aggression, it is quite tame creatures.

Cats Cornish Rex easily trained. They can be taught to bring a ball, like a dog. They can be easily accustom to walk on a leash. Surprisingly, these cats can take with them into society, as well as small dogs. They do not run away, and will behave correctly as possible.

These animals are very active and constantly in need of affection. Therefore, if you prefer quiet and independent pet, the Cornish Rex does not suit you.

Cats Cornish Rex require special care. At first. They need to be bathed regularly. This is due to the fact that this cat breed does not have the right amount of wool that could absorb the skin selection. After all, what happens at the furry feline representatives. If you wash your Cornish Rex often enough that these cats appear with skin problems.

Cornish Rex are centenarians in the cat world. With proper care they can reach the age of 20 years or more. Like all cats, cornish rex need a healthy balanced diet and plenty of exercise. The price of these cats in Russia can vary greatly depending on the pedigree and the seller.