Cats breed Munchkin - very unusual creation. Their legs are shorter than most other cats in two or even three times. Some call these beauties dachshunds of the cat world.

The story of munchkins

It is believed that its origin this amazing breed of cats found in 1983 in the US state of Louise's. A local resident found an unusual korotkolapuyu pregnant, slightly feral cat. She thought that her legs at the box short due to the harsh living conditions or some illness. And she was extremely surprised when the cat gave birth as korotkolapoe offspring. This is surprising kitten was a gift and the friend of this girl. Soon korotkolapyh pets, a new offspring. It is from these cats and their history are all modern munchkins.

In fact, korotkolapye cats have been known for a long time, but during the Second World War, almost all of them died.

Officially, the breed was brought to Russia only in 2001. And on the first exhibitions brought from South Africa, a great cat has attracted a lot of attention from domestic breeders.

The main feature of this breed is their short legs. The color of this breed may be any. Munchkin can be both long-haired and short-haired. These cats have a short, or vice versa, a very long nose. Munchkin - a cat of medium size with elegant, slightly elongated body. Due to certain external similarity Munchkin cats are often called TAXI.

These cats have a non-standard feature - they often sit on your hips, keeping the balance with the help of the tail. In this sitting upright, they can stay for a long time. At the same time their short legs hanging down on the sides, like a kangaroo. View from the munchkins at this point pretty funny. 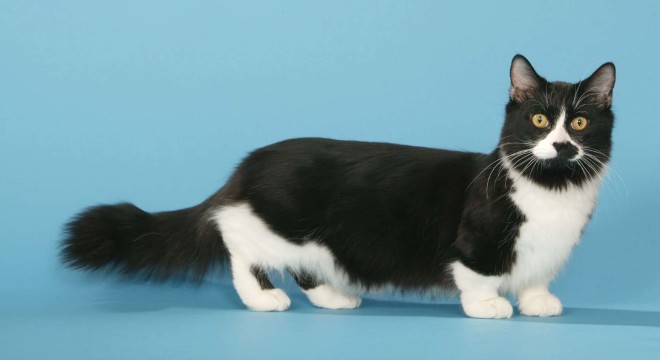 There is a disease that often affects cats of this breed - lordosis. Because of his weakened muscles that hold the spine. This leads to a lowering of the spine in the thoracic cavity, it starts to put pressure on internal organs. Lordosis can be expressed in varying degrees, and kittens with a distinct disease do not live up to 12 weeks. It is a rare disease, but it sometimes occurs in other purebred cats. Some veterinarians are inclined to believe that its origin - genetic.

Munchkin - cats with short legs, but it does not affect their mobility. Their limbs as agile as a conventional cats and korotkolapost has no effect on the spine or joints. These cats love to run, climb and frolic as well as their conventional counterparts. In addition, Munchkin extremely agile and fast.

Munchkin was born thanks to the natural mutation. Kittens of this breed can be born with normal feet. But if Mom and Dad handed offspring korotkolaposti gene, it can be fatal. 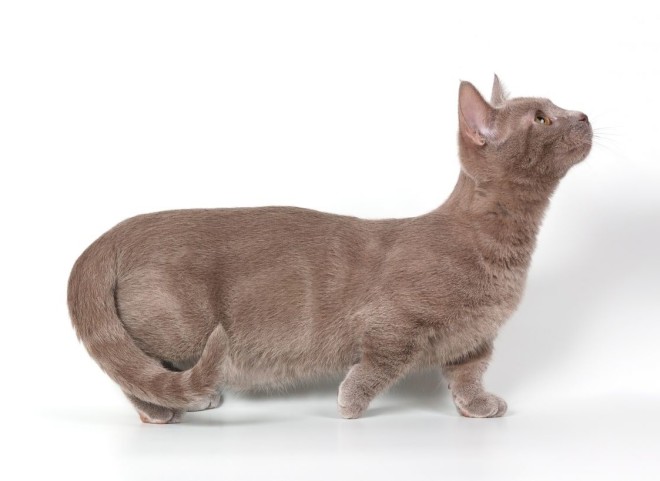 Despite its exterior features, munchkin cat does not need special care. Their enough to comb once a week and fed a healthy balanced diet. Munchkin is recommended to drive to the vet as often as every six months. In addition, these cats are very important to a sufficient amount of human attention.

It is very curious, active and cheerful creatures. These cats are perfectly adapted to the vicissitudes of life. People their character often seems a bit odd. The nature and type of personality of these cats can vary greatly. But usually they love their masters faithfully and not demanding in terms of care.

Although these cats are distinguished by short legs, it is very agile and active animals. They love to crawl up trees, jump on the furniture available to them in height. Short legs do not interfere with their passion for climbing, as they have adapted to use them as deftly.

Sweetheart feature many munchkins - love of small toys. They often take little things and hide them in secluded corners. However, it is important to note that these cats are not adapted to living on the street and do not catch mice. Keeping them is best in the apartment, or to protect from the street walks.