Currently, the German Rex breed is very popular all over the world. What is interesting, first fiddle in her appearance played his Majesty the case. Once in a village, which is located in East Prussia angora cat, brought surprising offspring. The fact that the father of the kittens became Russian blue cat. The kids, in turn, inherited the character and appearance of the signs of both parents. The owner of the cats do not have sufficient knowledge of the feline, I did not pay much attention to the unique kittens. But the situation is saved by one of the local breeders, who had heard about the appearance of unusual children. He appreciated their unusual features, and took to himself two animals. Thus began the history of the new breed - the German Rex.

At first these cats were bred only in one of the kennels Konigsberg, but later other breeders have expressed their desire to engage in this unique breed.

After the Second World War, a lot of animals were exported from Germany to the soldiers of the victorious countries. These cats have quickly gained popularity and was forced to draw the attention of many specialists felintologov.

In the seventies, it has been developed and approved by the breed standard. Almost all cat organizations have recognized her except CFA, which is considered one of the German rex devon rex varieties. Today is a very popular breed. Her fans are not only in Europe but around the world. No major cat show is complete without the German Rex. In Russia there are several nurseries working with this breed.

The head of the German Rex preferably a circular shape, with a slightly protruding forward muzzle having certain features clearly. The ears are not very mobile, have the same width over the entire length with a wide distance between them.

Adult cats on average weigh four kilograms. Have developed musculature dense physique and your back straight. The tabs have an average length, the rear a little more forward, which causes a feeling of elevated croup.

Representatives of this breed have a rather wide-set eyes. Which are farther from the nose and closer to the outer side of the muzzle. Eye color may be any life, the main requirement - it should be rich and clear. The most common colors - yellow, blue, almond.

The coat is short, soft, it has a wonderful curls, especially pronounced on the back. Color may be any.

These animals are very active, almost constantly moving, exploring the world around us, love outdoor games with the owner. The mood of the German Rex is always upbeat.

A distinctive feature of the breed is their so-called musical. These animals are constantly humming to himself only to them understandable cat ringtones. Murchaniya also means there is a dialogue with the person.

German Rex likes to be the center of attention, with great pleasure spending time with your family, good to the children. But if a child accidentally or special reason this cat pain, the German Rex is likely to give back.

Cats of this breed does not get along very well with other pets, with the exception of cases where they have grown up together from childhood. With suspicious of all strangers visit the house in which he lives.

This breed is notable because it does not require any special care. For his excellent German Rex fur groomed own, only occasionally need to comb out the wool and wash the cat. Owner remains a haircut periodically them nails and clean the ears with a cotton swab with a special solution to monitor the purity of the eye. The food is not fussy, eat they give. Only what you need to remember is the availability of high-calorie food during the cold season, as the fur of these cats do not have a thick undercoat. 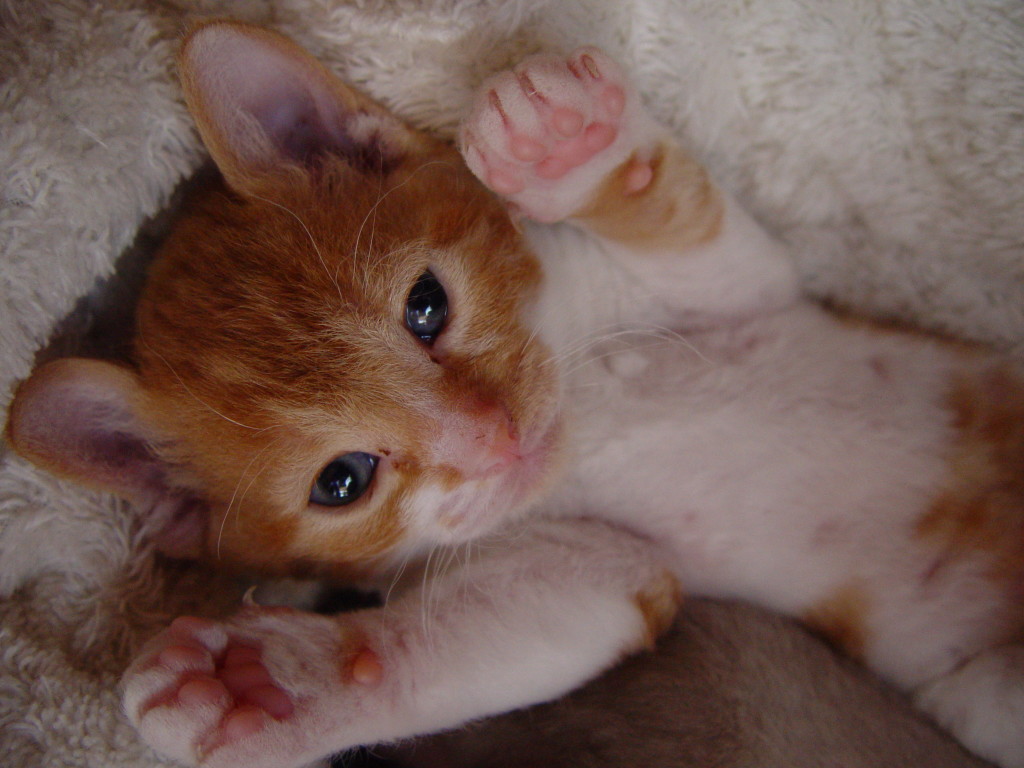 Special, peculiar only to the representatives of this breed health problems a German Rex has. This is quite healthy cats with well-developed immune systems. Care should be taken only for the amount of write consumed by the pet, as it is believed that this breed is prone to be overweight. With a good, balanced diet that includes all the necessary elements of health problems should not arise at all.