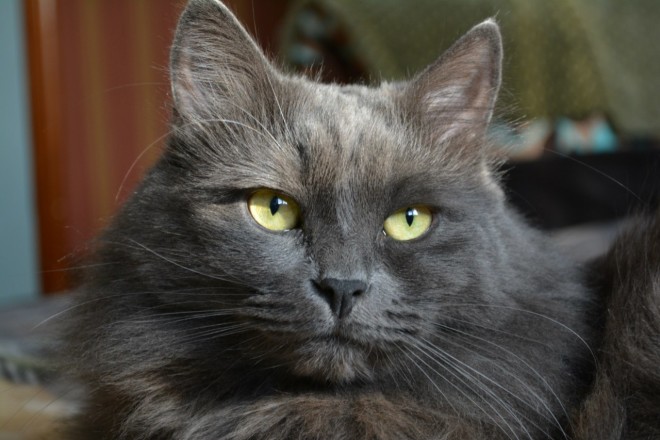 Nibelungen - breed long-haired blue cats with solid color. These cats are somewhat similar to the Russian blue breed. From the German name "Nibelung" is translated as "mist creation." This name can be very useful it is suitable for cats with silky hair, sparkling green eyes and gentle nature.

In the 80s of the last century in Denver domestic cat with black short hair named Elsa met the neighbor's cat, which was very similar to the Russian blue. Then they were born six kittens - five kittens black and blue color with short hair and one kitten with a solid blue color, silky hair, graceful limbs and a physique like a Russian Blue breed.

A resident of Denver Cora Cobb took myself this Fluffy and called him Siegfried (the name of the hero of Wagner's opera "The Ring of the Nibelungen"). After another meeting with Elsa neighboring Russian blue cat has 7 kittens appeared, among which was a solid blue color cat with a long silky coat. Unlike Siegfried her hair was lighter and longer, and Cora Cobb decided that these two individuals could be the progenitors of a whole new breed. Cora cat named Br?nnhilde, was the name of his beloved Siegfried in Wagner's opera. Soon Siegfried and Br?nnhilde was born 3 kittens solid blue color, with long hair.

In 1987, Cora Cobb assisted by geneticist Dr. Solveig Vane describe the breed standards Nibelung, which was almost identical to the Russian Blue breed. The only exception was the length of hair.

Since that time the number of cats of this breed has increased, and, despite the dissatisfaction of Russian Blue breeders, breed yet become universally accepted. Since 1997, this breed has championship status. Unfortunately, not all breeders involved in breeding of this species, but it is hoped that they will be more as a long-haired breed with a gentle nature beauties learn more.

Nibelungen also engaged in breeding in Russia. Several individuals Russian Nibelungs moved to the United States to strengthen the line and expand the gene pool. Admirers of this breed is believed that these cats - a recreated Russian Blue breed, which participated in the first cat show in London's Crystal Palace in 1871. This breed long-haired cats had great similarity with modern Nibelung. 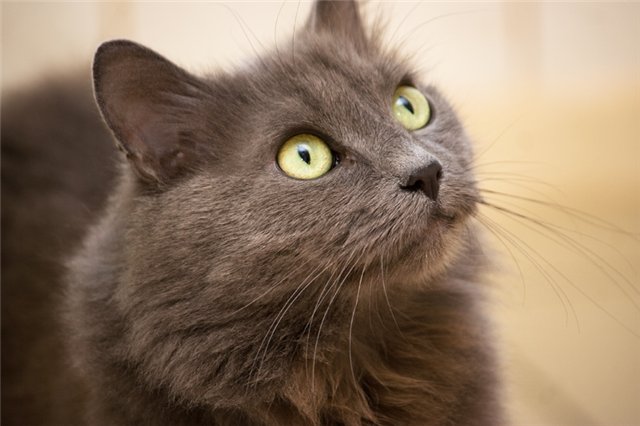 The main difference from the Nibelung Russian blue cat - size coat length. Russian blue cats have short thick fur and wool Nibelungs have medium length, thin, soft and silky. On its hind legs and tail hair is longer than on the rest of the body.

Nibelung cat breeds can have only one kind of color - solid, and only one color, which connoisseurs consider the blue cats, in reality, this color is called a light gray.

The tips of the hair are a lighter shade, thereby creating the effect of wool flicker. The eyes are always green, sometimes kittens are yellow, but with age they become green.

Nibelungen as Russian Blue, are sweet, kind character and a soft voice. These cats are quite a long time to get used to their owners, and avoid contact with strangers. Accustomed to, over time, they become very playful and fun. 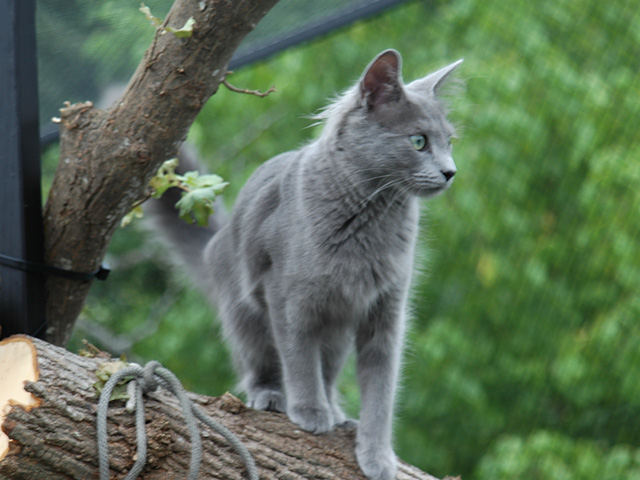 As a rule they are a lifetime devoted to one man, and very much like him. However Nibelungs are not overly intrusive. they are usually tied to its owner, and give him all my love and tenderness. But at the same time, these cats are unobtrusive. Some individuals like to sit on your lap, and some are simply a number. They do not need constant attention, but it does not mean that they can be left to fend for themselves. These cats is vital to feel the care and love the owner. If you still have to leave your pet alone all day, then obzavedites another cat to brighten the life of your four-legged pet.

Although the fur of the Nibelungs is quite long, it requires little maintenance. However, to coat it was beautiful and silky combing her 2-3 times a week, a metal comb with a few teeth. During molting, in spring and autumn, this procedure should be performed at least once in 2 days.