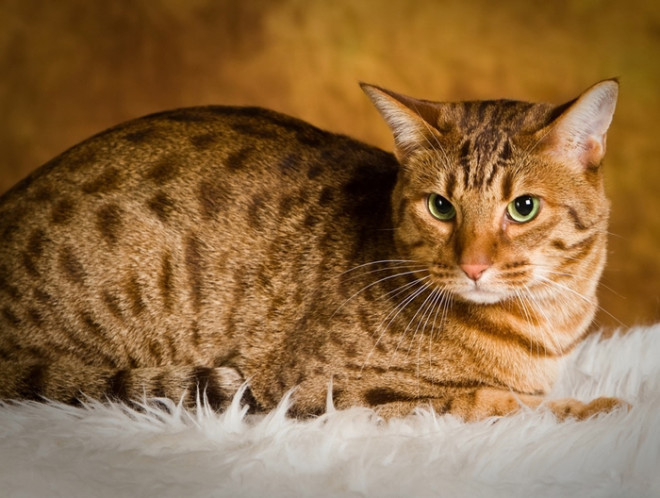 Ocicat - a breed of domestic cat that looks very similar to wild cats. Oddly enough, they do not have a drop of blood the wild. Their strangeness lies in the fact that having a wild color, they have a truly home temperament. The name they got from the large similarities with wild animals - Ocelot. This breed is a mixture of Abyssinian cats with the Siamese. Later DNA Shorthair has been added to the so-called "silver tabby". Because of their very sociable temperament Ocicat often equated to the dogs.

They are easily trained and seriously engage in training, you can teach them to bring items, cast a vote, to respond, sit, lie down, and much more.

Therein lies their features, they are always ready to communicate, active, affectionate, despite the wild appearance.

In the 60s of the last century breeder cats from Michigan, Berkeley named Virdzhiniya Deyli decided to get a Siamese cat with coat spotted tabby, with the result that this breed has been obtained after a long work. And already in 1988 has brought the standard for the breed Ocicat. Currently it is forbidden to cross them with Abyssinia. In France, the breed made its debut in 1989, but there it did not spread, compared to the US.

Torso - medium or large in size, well-developed muscles. In weight Ocicats reach from 2.5 to 6 kg.

Head - shaped like a triangle, the lines smooth and profile with soft transition from forehead to muzzle. The adult males might be slight sagging cheeks. The muzzle is broad, chin strong. The neck is markedly curved.

Ears - medium size, located on the sides of the head, erect. Welcomed the presence of tassels on the ends.

Tail - long and thin, tapering towards the end, where a dark spot.

Wool - thin, smooth, short length, but still it is sufficient that every hair was painted in several colors. At the touch of wool is soft, slightly shiny, wool blanket or spotted agouti - color spotted tabby.

Color - chocolate brown, purple, blue, light brown, dark brown. Sometimes the color can be silver, but should always be clear and pleasing to the eye. The spots usually with sharp edges. Muzzle and extremities darker than the body. Spot on the forehead with the letter M. The cheeks in the dark line. 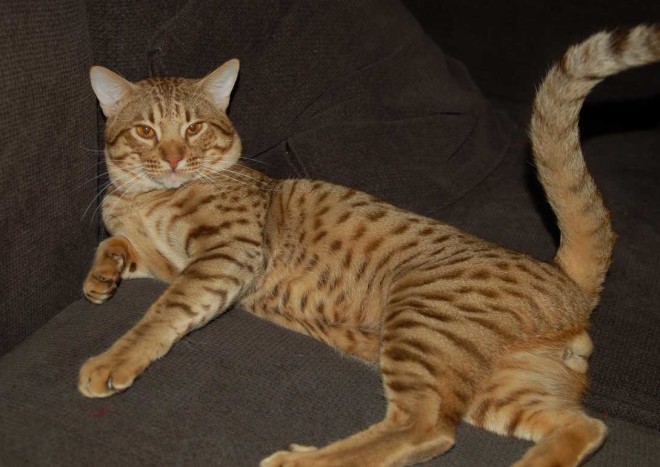 Ocicat endowed with rare zest for life. They are very curious and playful. Despite the predator habits, these cats are extremely friendly and affectionate to his master. Like Siamese cats are very loyal to his master, but have weaker voice. Ocicat Cats are very good to the children, they immediately become the best friend of your child. On the other cats they have a good relationship, but they are always trying to show leadership.

This breed of cat adapts easily to new conditions of life. These cats are very self-confident, they are restless extroverts, entertain themselves.

If you are seriously engaged in the education of their pet-Ocicat, you will be able to teach him not only to other teams, but also to teach him to learn his name. They are very dependent on people and can not live in isolation. This breed is ideal for people who spend most of their time at home. Loneliness it is very hard to bear.

care for them is not difficult, you need only occasional brushing and combing. Their smooth coat is easy to comb, this procedure should only be carried out in the moulting period. Brushing regular desirable, as for any other species, to avoid dental disease. You can use the size of the brush, both for young children and special toothpaste. 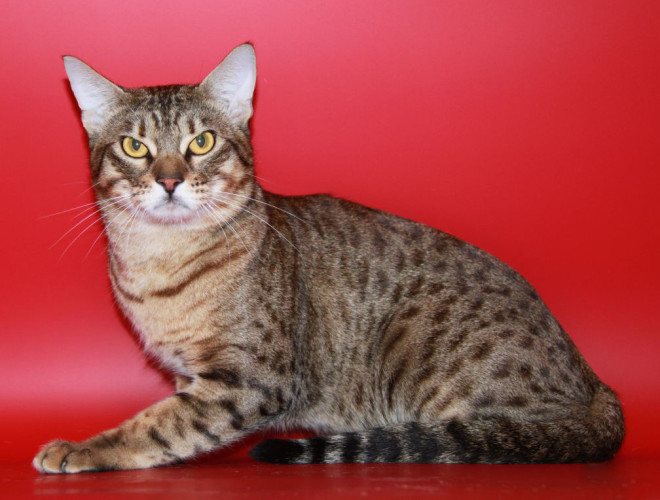 Usually Ocicat differ excellent health. They live long enough - from 15 to 18 years, when the content in the home. However, it is worth paying attention to hereditary diseases of the three breeds by crossing which Ocicat breed was bred. Some cats in their genetic lines could inherit kidney disease. Less common RK deficiency causes anemia, it can occur in Abyssinian cats. But do not despair, if you are going to get a cat of this breed, as not all Ocicat prone to hereditary diseases.

Price Ocicat breed varies from 5 to 30 thousand rubles, depending on age, ancestry and other assessment requirements.