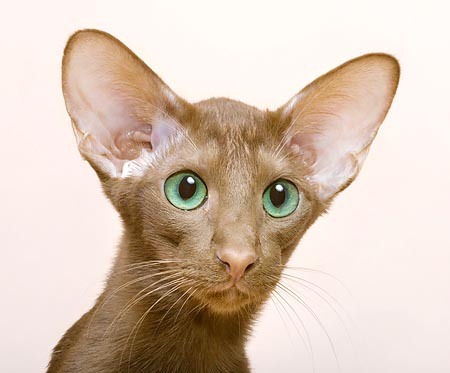 Oriental charm ( "Oriental" translated to English means "east") is indescribable. As the French say - "a woman can not be truly beautiful if it does not have anything nasty." These words can be fully attributed and cats breed "oriental." Mysterious, a bit "scratchy" look, absurdly long body, large ears, a long thin snout. Like it sounds ridiculous, not only with respect to these aristocratic beauties of the cat family. His unusual appearance, graceful and energetic character of these cats have conquered millions of people around the world.

How did the breed

Orientals, along with the Siamese cats were imported to Britain in the 19th century. But here the "conquest of the world" Oriental cats had nearly escaped because British experts did not see anything interesting in them and find them just "deviation" from the Siamese. They said they would deal exclusively blue-eyed Siamese cats Himalayan.

Fortunately for the Orientals, and their breeders were not satisfied and went to look for "justice" in relation to their pets in the United States, where felinologists were not so finicky.

In 1956, Quinn California nursery appeared progenitor of the American oriental Havana Brown Roofspringer Mahogany Quinn. Preliminary breed standard was adopted two years later, and after six years the breed oriental shorthair received champion status in CFA. Thus began the struggle for the right of existence of pedigreed cats of Siamese type, but with a solid color. And in 1977, it ended in complete victory for oriental fans - the breed was recognized felinologists around the world.

Later in the breed introduced gene, which distinguishes for the long fur of animals, and in 1997 had already received the long-haired orientals championship title in CFA. Today Orientals gained a lot of fans around the world. In Russia, they appeared only in 1987, but immediately won the hearts of the local cat owner.

in oriental body resembles the shape of a tube, it is long and slender, with delicate bone and muscled, his stomach tightened. As standard, the shoulders should be no longer hip. Cat of this breed are usually larger than a cat. 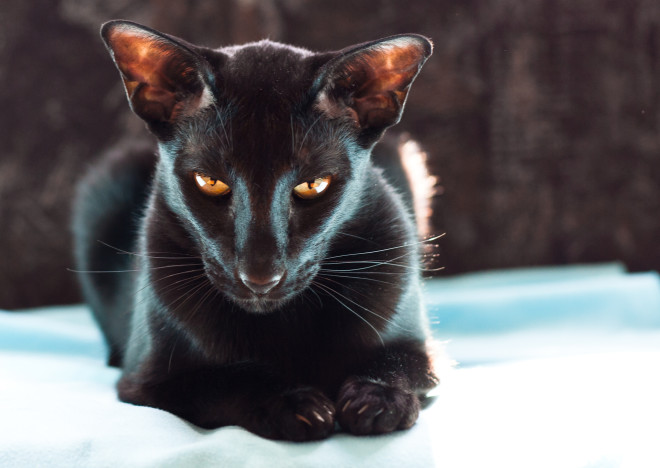 Shapely legs and a very long tail at the same time longer than the front. Paws oval, small.

Oriental tail long and thin, tapering to a point. In long-haired tail of Representatives "is equipped with" long outer coat hairs.

Harmonious and very long neck crowned head considerably elongated wedge-shaped. The nose is long, flat, without recess at the transition to the forehead.

Eyes almond-shaped, slanted, medium size. The distance between them should not exceed the width of the eye.

The ears are large, rounded, with a head form a general wedge shape.

Wool tight to the body. Moreover, long-haired representatives looks a lot shorter than it actually is. According to the structure it is thin, satin, without downy undercoat. The longest hair on the tail.

Breed has 42 color variation allowable standard. It is important that color was uniform, without white hairs and stains, as well as without the tiger moire. 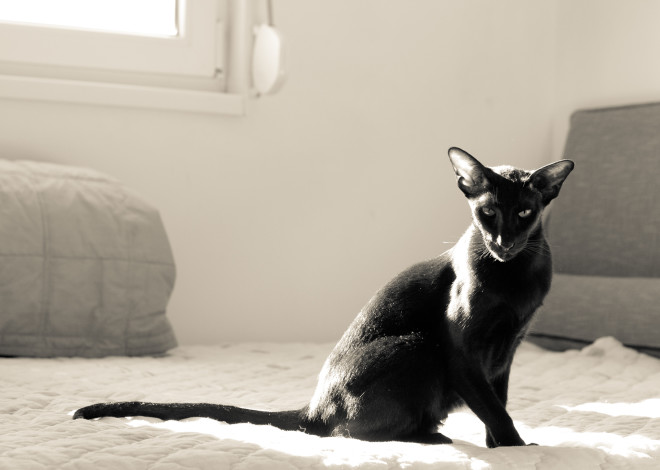 The main distinguishing feature of the Orientals that they do not suffer loneliness, constantly in need of human company. They do not tolerate negligence towards them and it is able to draw attention to themselves, so that these pets, quite frankly, very demanding. For the owner, they walk on his heels. Oriental cats are very emotional - their behavior is immediately obvious that the cat feels, wants, or plotting. Orientals also very "talkative". For some reason there was a myth that they have a bad voice. But this is absolutely not true - they meow quite common. But if the cat has decided to sing you my aria, it is almost impossible to stop - pet offended.

Orientals are very sociable and devilishly charming, very friendly to people, and not only to those who are well aware of, but also to the guests, which they see for the first time in my life. The nature of these cats, their beauty and energy, in turn, can not leave people indifferent.

His playfulness of these cats remain until the end of life. Like kittens and adult cats are equally pleased to be worn over the ball.

Orientals - typical couch potatoes and do not require walks. But, again, in dire need of communication, so it not recommended by the representatives of this breed to those who constantly at work. Without human interaction, these cats may even fall into depression. 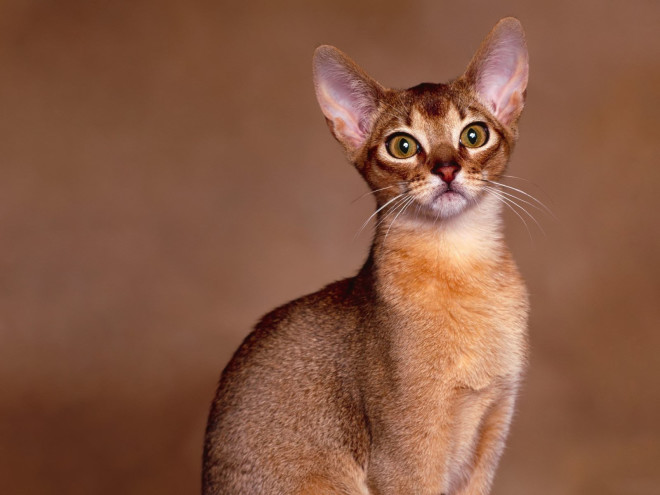 Some complex care Orientals do not demand. enough to comb once a week their wool rubber massage brush or wipe gloves with rubber inserts. After scratching, gently clean the cat's body with a damp chamois or terry cloth.

You need to very carefully look after their teeth pet because Orientals are prone to gingivitis (gum disease).

It is very important to maintain a comfortable temperature in the room. Coat of oriental short, so they absolutely can not tolerate the cold. It is intolerant to cold, including the long-haired orientals, because their fur serves an aesthetic function rather than heats the body, because it has no undercoat.

The food Orientals are not too picky, but do not forget that the food must be balanced. Oriental contraindicated pork, oily fish, raw river fish.

If you do the tips on maintenance and care, and, of course, do not leave your pet for a long time one of your Oriental will delight you with its charm and devotion throughout his life. By the way, these cats are considered to be long-lived.