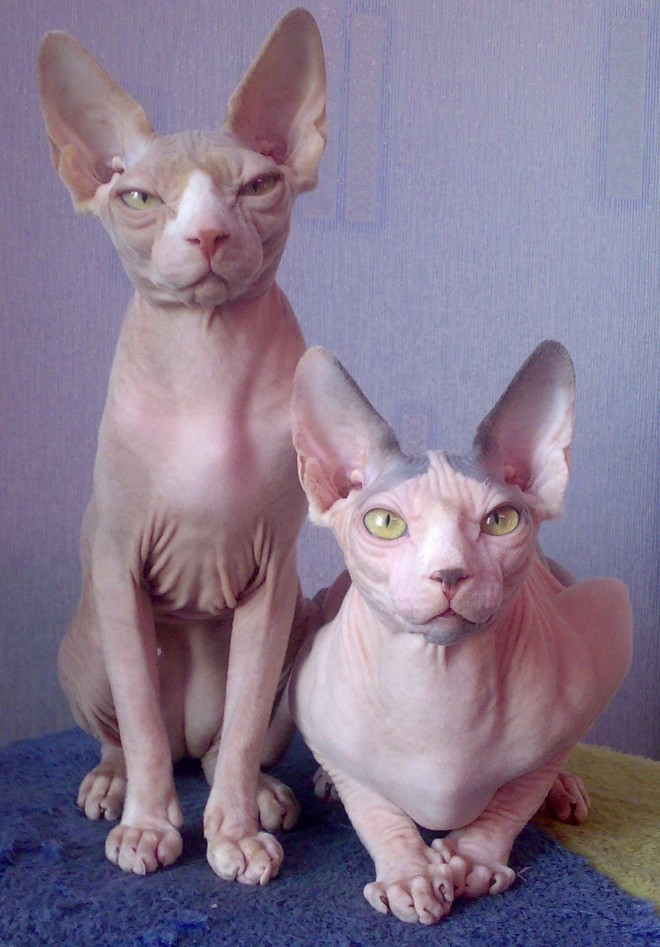 Hairless cats are quite unlike their relatives, have thick fur. Wonderful character, loyalty to his master and the desire to always stay close to these animals give an extraordinary resemblance to dogs. They can not stand being alone, do not need a soft cozy couches and a pile of toys. The most important thing for them, so that the owner was always there and does not deprive the attention.

The story of the bald cats

These cats, owe their unusual appearance "gene besshorstnosti", appeared as a result of random, unpredictable mutations over hundreds of years. Representatives of the bald rocks have been found in North America, Australia and France.

For example, Mexican besshorstnuyu cat for the first time in history in their works described Frances Simpson. He pointed out that two individuals who do not have the coat, were bought from, Aztec Indians in the vicinity of New Mexico. The elderly leader of an Indian tribe told that these animals are the last representatives of the ancient Indian rock, are found only in the vicinity of New Mexico. Cats named Nellie and Dick, they had each other siblings. For this reason they did not interbreed. However, after some time there was a trouble, Dick was torn to pieces by a pack of stray dogs. Nelly tried to find a suitable partner for mating, but to no avail. The breed has been lost.

However, they then owner Mr. Shinnik described the traits and habits of these animals. He pointed to their innate good manners, incredible dedication, love of affection on the part of the owner. In general, many of the same traits that have a modern cat breeds bald.

Interestingly, according to the external signs Mexican hairless cats are different from today. Their head was wedge-shaped with those located on her huge ears, eyes the color of amber. Their physique different lightness and airiness, and on the face grew a mustache. It is interesting that during the cold season, they were covered with short hair, which is a heat attack completely cut off.

At the end of thirty-six years in one of the Oxford journal felinologist Ida M. Melen suggested that deprived of wool from Mexico cats were associated with similar animals of South America, which in 1830 described the German scientist and naturalist Rudolf Joza Rengdzher in his book on the fauna of Paraguay. If you believe the words of the scientist Paraguayan bald cats are descended from animals introduced by the Europeans in the fifteenth century. He suggests that the loss of the coat caused a sharp change of climatic conditions in comparison with Europe.

Interestingly, in 1938 in Paris, it was recorded in case of occurrence of two besshorstnyh kittens in a litter of two Siamese cats. After a lapse of twelve years, another Siamese cat in France gave birth to three babies bald. These animals were subsequently crossed with each other, and gave birth to several kittens bald. However, further information about the crossing was lost. 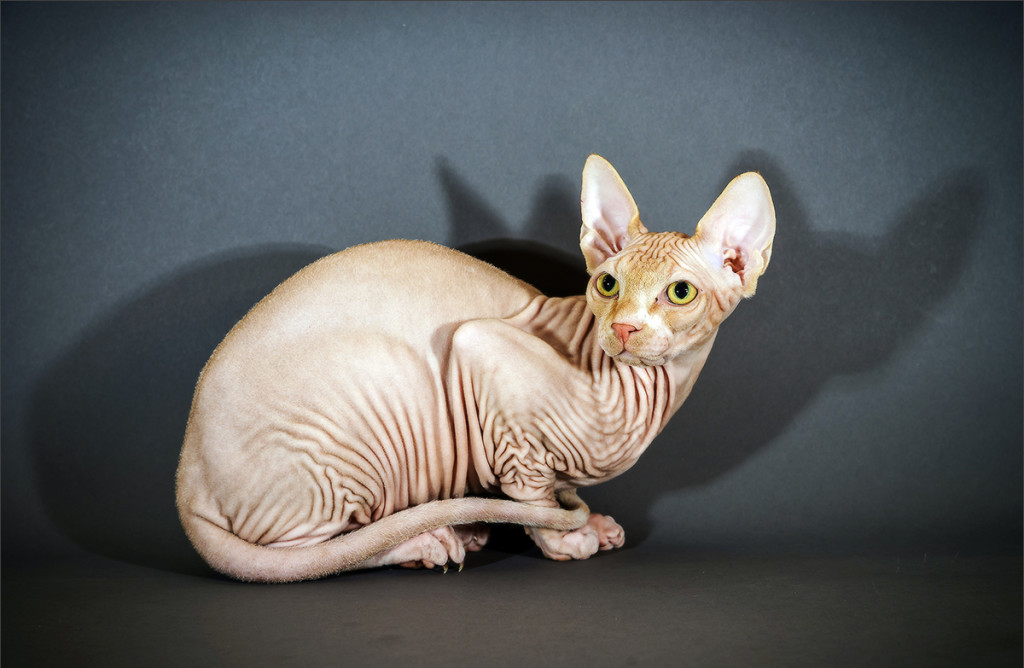 In 1966, Canada was born hairless kitten, who was given the name of Prune. This kid went on to become the progenitor of the breed Sphynx.

Since the first was nothing specialists know about cats hairless cats, they are very often made mistakes in the care and breeding of these animals. But gradually the body of knowledge about the features of these animals is enriched and now hairless cat breeds are very popular all over the world.

Currently, there are several associations of fans of these wonderful animals. The largest and most respected - ISBFA.

Today, there are three officially recognized the breed of hairless cats in the world. These include the Canadian, Don and St. Petersburg (Peterbald) sphinxes. In this case, all three breeds differ from each other both in their appearance and wearable for gene besshorstnosti.

Due to their physiological characteristics of this breed of cats is different to their unique behaviors, habits and character. For example, these animals are quite gluttonous, so they need to maintain body heat. When their content is necessary to consider the need for animals to create a warm and comfortable conditions. 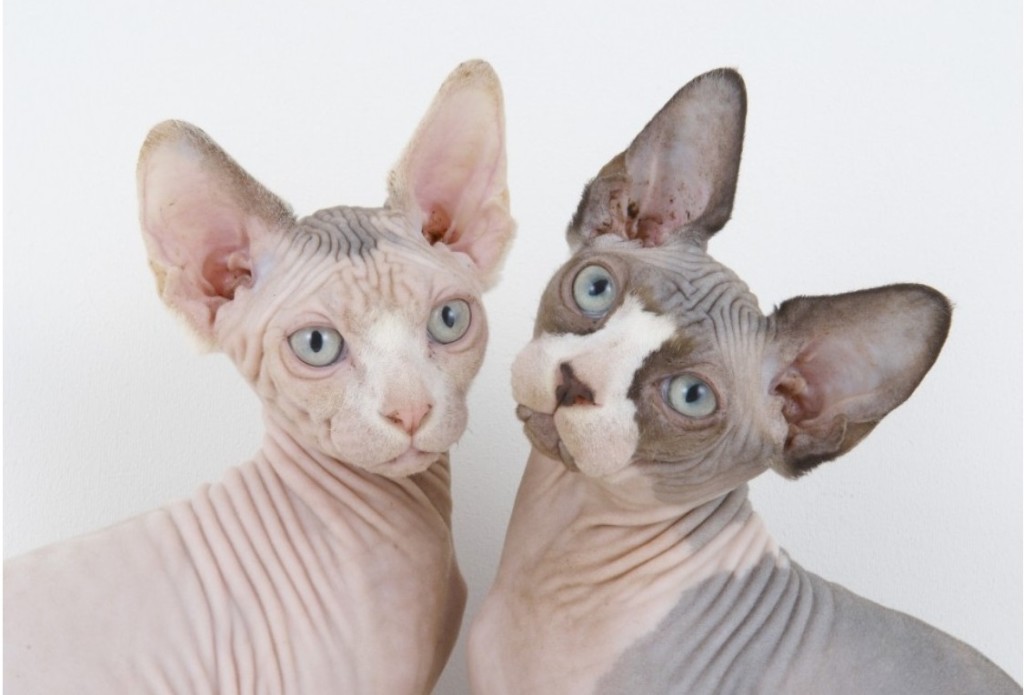 During warmer months, take care that the animals often are in the shadows, and not under the scorching rays of the sun. Since their tender skin can burn in a jiffy. Also, the body surface need regular wiping wipes, special care in places of folds. Their huge ears also need attention. Clean them more often, otherwise dirt will accumulate very quickly.

No matter how hard to keep these animals, their character pays for all the difficulties of this process. They become real members of the family, are tied to all permanent residents of the house. Excellent get along with children. The only thing that could upset these remarkable animals - loneliness. So if you by their occupations too often are at home, it is better not start this cat. Your regular departures will be for her the strongest stress.