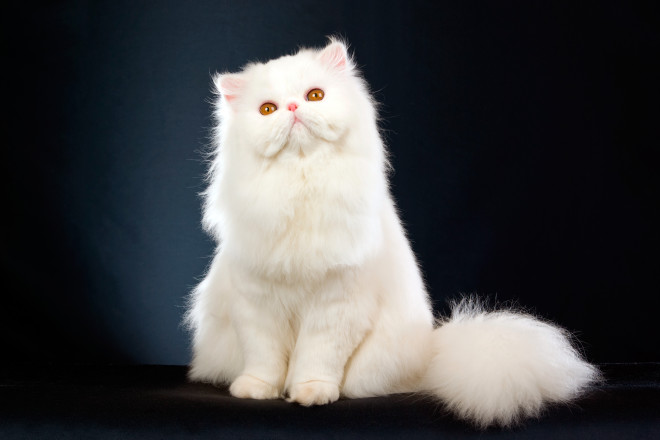 Persian cats - one of the most popular pets, including in Russia. It is amazingly beautiful creature with a soft beautiful hair. Persians - cat companions, they are loyal friends and great listeners. Unlike many other cats, they are sincerely attached to the person. But what would the Persian cat was not involved, it always remains true aristocrat. And you purring in your ear a cat song and a joyful meeting with your work or school, and taking a favorite treat, and even enthusiastically surrendering to the game.

Persians - one of the oldest breeds of domestic cats. But if from 16-17 centuries, namely since they appeared in Europe, its history can be traced quite clearly, up to that time, she is full of mysteries. There are several versions of their appearance in Europe.

On one of them, the Europeans owe the appearance of Persian Italian traveler Pietro Della Valle, who in the early 16th century brought them from Persia (now Iran), namely the province of Khorasan.

Another version says that the first long-haired cats were brought to France from Angora (now Turkey) in the 17th century. Moreover, those who are inclined to the second version, it is believed that the name of cats arose not because of their place of origin, but because it was attractive and mysterious (then Europe is just discovering the beauty and attractiveness of the East, establishing trade relations).

By the way, with the Angora cats Persians do have a lot in common. First, in the structure of the body - both species are well developed chest and shoulders, loins strong and muscular legs. And also those in other distinct fur "collar", and in the ears and in the interdigital spaces - tufts of hair.

And she and the other legend does not answer the question - how do not in the coldest countries in the Middle East could emerge cat with a long hair. Here, again, are different versions. Some biologists say that the long hair - it's the result of a mutation. This assumption has the right to life, it is common knowledge that some of the modern breeds of cats arose just because of mutation. This fold, and Rex and hairless Sphynx.

But according to another version, in the eastern countries grandparents Persian cats were all from Siberia. At first glance, absurd, this hypothesis still has justification. Initially, because Siberians were wild cats, which in the course of evolution interbred with other steppe cats, and their hallmark is precisely the tufts of hair between the toes, which, as already mentioned above, is inherent to the Persians.

But where would the Persian cats were not, they were able to very quickly conquer Europe. Thanks largely to the traveling merchants who, to increase the value of the goods in the eyes of the buyer claimed that these animals - the result of crossing the dunes of Pallas' cats and cats. 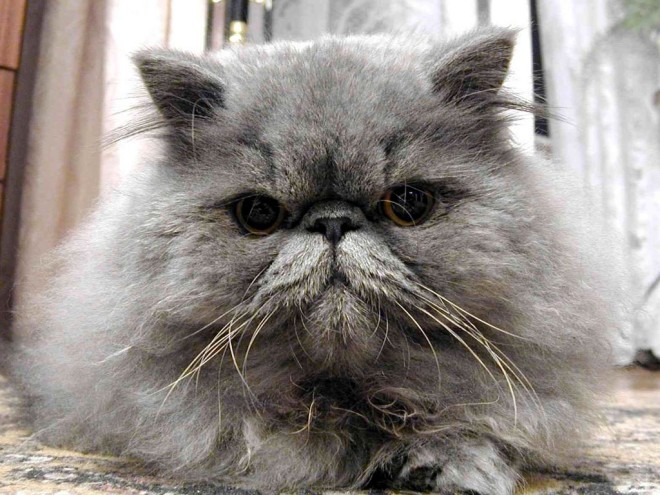 The second homeland of these cats can be rightly regarded as Britain. The British general avid cat owner, and the world owes them the appearance of many breeds. Here in the 19th century breeders have come to grips with long-haired cats, which they were allocated to the Angora and Persian. Only at that time it was believed that Persian cats should be extremely blue color. In parallel with the British were breeding work and the Germans, crossing refined representatives of the Angora breed with local long-haired cats. But the pioneers in the removal of the now famous Persians still considered to be British.

But the Americans did not have the best contribution to the breed at the end of the last century. Engaged in breeding animals with extra-long hair and a flat nose as much as possible, they received a lot of rejected animals, which were sold in Europe. However, in the end, they were able to bring extreme, which are very popular all over the world.

The Russian cats were after the opening of the "iron curtain", they bring diplomats from other countries in the late 80-ies of the last century and considered to be extremely rare. But very quickly the Persians gained popularity and attracted the attention of Russian breeders. The latter, however, more than not liking ekstremaly and aristocratic type of cats who have a soft and classic profile. 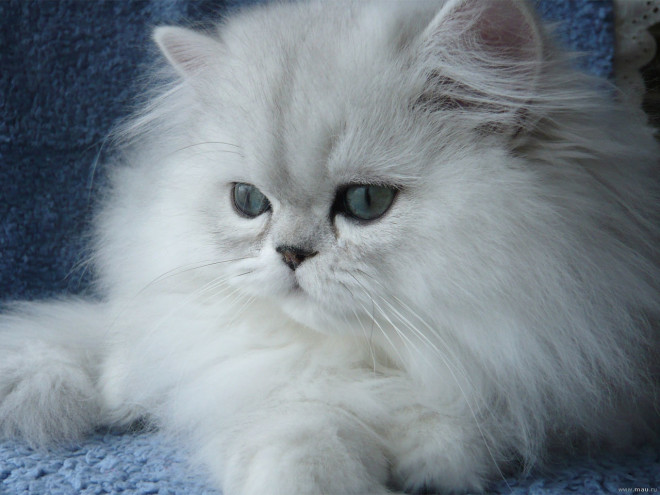 To date, there are three basic universally recognized standard of Persian breed.

Some experts distinguish and another type - "too extreme". Nose they have bullied very much and cats at the same time are more like pigs than to members of their family.

And in the 30s of the last century, another variety of the Persian cat has been bred in Europe, "exotic". She is short, "plush" fur. Because of this those fans of Persian cats that are allergic to either coat or no time for endless scratching pets, too, were able to start the Persians.

The richness of colors and soft wool 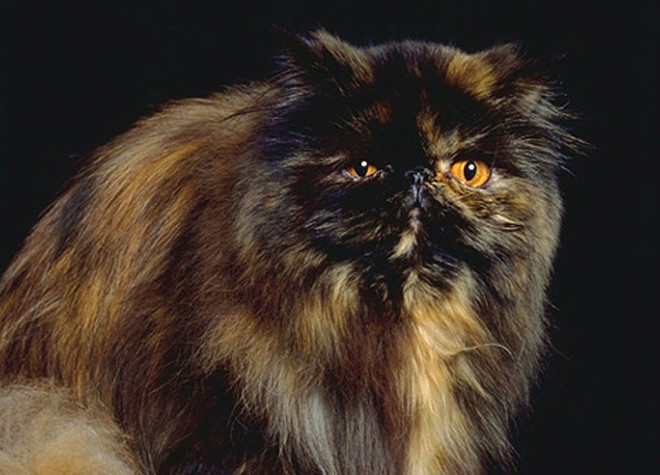 Perhaps such a variety of colors will not meet in any other breeds of cats. The officially registered number of colors - more than a hundred. White, black, red, blue, tortoiseshell, cream - what only the Persians will not find. A "color-point" calls to mind the Siamese. Only by adopting color specificity, the Persians preserved soft and extremely long hair and docile nature than Siamese obviously can not boast.

It is worth noting eyes - they are among the Persians surprisingly large, expressive, pure saturated colors corresponding to the basic color.

And of course the main feature and the pride of the Persians is their long hair (10-15 cm). It is very soft and has almost no undercoat - and why is it needed at this exceptional lifestyle homebody.

The behavior and character

Probably due to its "angry" face, especially in the extreme, many believe the Persians very finicky and having quarrelsome character. But this opinion is absolutely not true. Rare to find a breed that would be so tied to the person and would have had such a gentle and docile nature. They are very delicate and peaceful. By the way, it is quite easy to learn. These animals are very unobtrusive in conversation, they rarely meow, and outsiders are very cautious. Very interesting to see the Persians, to the owners who came to visit. He is watching closely who came, displaying exceptional vigilance, despite the fact that the form in this case is quite detached.

Persian cat - an aristocrat to the marrow. This is evident in everything. Even showing strong emotions: the joy of meeting with the owners, fear, passion for the game, the Persians retain only "decent" appearance. 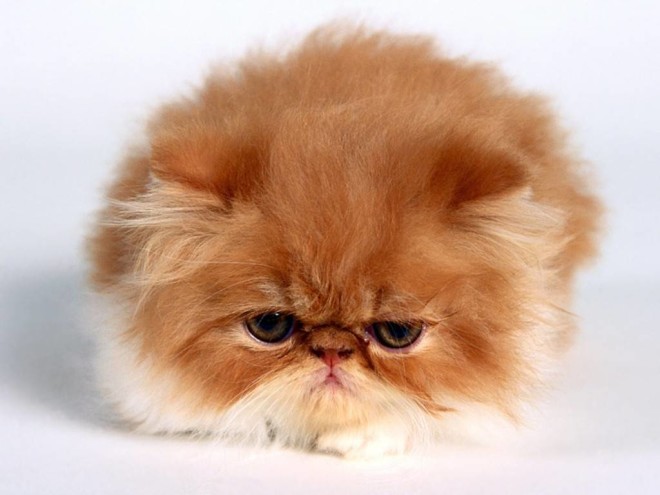 If a Persian cat from you anything you need, it will never be hard and heart-rending meowing. It just sits in the master's feet and looking into her eyes so significantly that no "words" everything becomes clear. If the cat is still publishes meow, her "conversation" is more like a baby babbling "ma-ma, ma-ma." Since Persian is trying something to complain about his master.

The Persians are exclusively home lifestyle, do not require long walks, or go to the "spree", like other cats and cats. Hunting instincts Persians did not show - except run for lice. But the mice, birds and fish, they prefer to observe.

Since the main feature of the Persians is the only long hair, then you need to prepare for the fact that it will be everywhere - on carpets, on clothing, on the beds. So often have to clean.

In addition, wool cats require special care. It needs to be a regular comb to prevent any tangles, which deliver the cats discomfort and even pain as tightening the skin.

Also increased attention should be the eyes and nose of a cat. They should always be kept clean. Wipe quite profuse discharge from the eye. Make sure that the house or apartment of incoming fresh air, because thanks to the special structure of the nasopharynx Persians difficulty breathing. This applies particularly to the extreme.

Cat be sure to select your seat, couch, where she will be able to sleep like a stretched out at full length, and curled.

With pleasure Persians and will sleep in different houses cat. Only there is a caveat - if you need to get a cat out of its "home", never pull her hands, the animal better than any lure or just call. Otherwise, the cat begins to perceive your house as a trap. 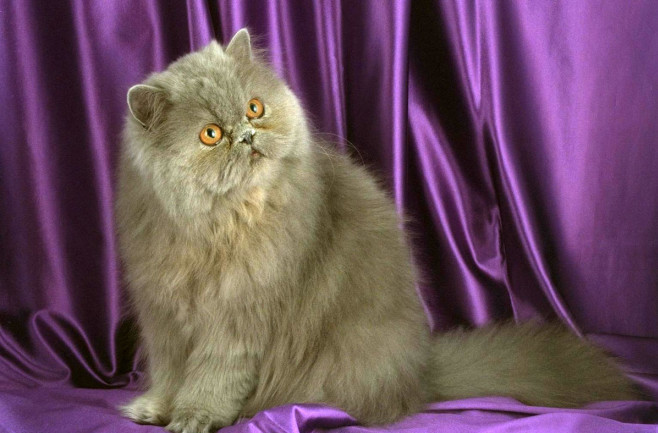 Adult cats and cats should be fed 2-3 times a day, kids eat more often. Up to 40% of the diet should be protein-rich foods. This is lean meat, sea fish, cheese, eggs (Only in any case not raw). Cats also need cereals and root crops, which should be mixed with other products to cat them more willing to eat. Also in the cats diet should include fish oil. Do not give up Persian, like the other cats and by fresh green grass, especially grown in pots.

In short, the head of the house or apartment Persian cat, you will get a lot of trouble. But all this is offset by the amazing tenderness and contact these great representatives of the cat family.