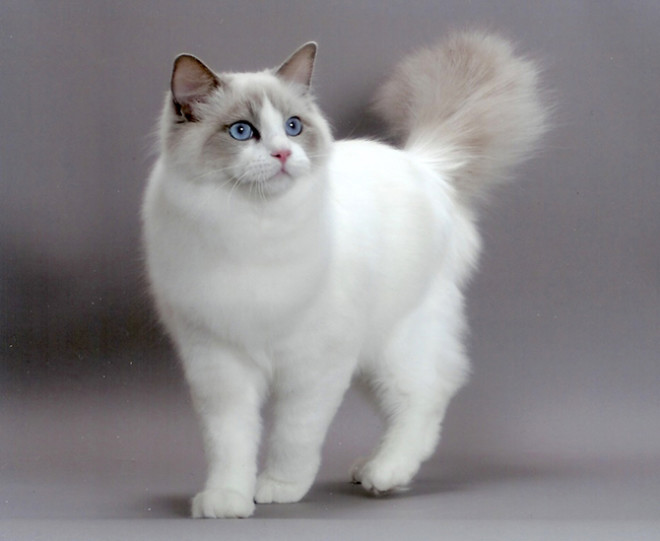 Ragdoll - stunning, gorgeous cats with matchless looks and superb temperament. Everyone who has ever had to deal with these marvelous creatures, will be amazed by the splendor of their once and for all.

The history of this breed of cats has its origins in the early 60-ies in the United States. It is believed that the ancestors of the Ragdoll - this Persian Angora cat and a Burmese cat. Immediate breeder breed is a resident of California, Enn Beyker. Complaisant breeding these cats helped by volunteers after being hit an amazing character and affectionate disposition of this breed.

Translated name of the breed Ragdoll means "rag doll". It is a large breed of cat, late maturing and development of the peak reached only by 3-4 years.

Head - a medium-sized, wedge-shaped, with the plane between the ears. Clearly defined pads under the mustache, cheeks, jaw. A clear transition from the nose to the muzzle. The length of the bridge is twice the width. The chin is of medium size.

Ears - with a slight forward lean, medium size. The inner side of the ears is covered with hair, ears ends rounded, often with brushes.

Eyes - big, beautiful, oval or nearly round shape, located slightly sloping to the nose. Apart quite widely. Eye color is deep blue, celestial, but may be present and duller shades. Glance, it seems as if surprised.

Body - strong, muscular. Broad chest. The back of the body have more severe. The housing is well developed, slightly lengthened. On the stomach may be fat. Cats are much smaller than cats, although sometimes there are large specimens. In weight up to 5-6 kg. Males of this species reach up to 1 meter in length.

Neck - a short, fairly strong, as the body. With the abundant wool cover, length slightly longer than the body, in the form of a collar. 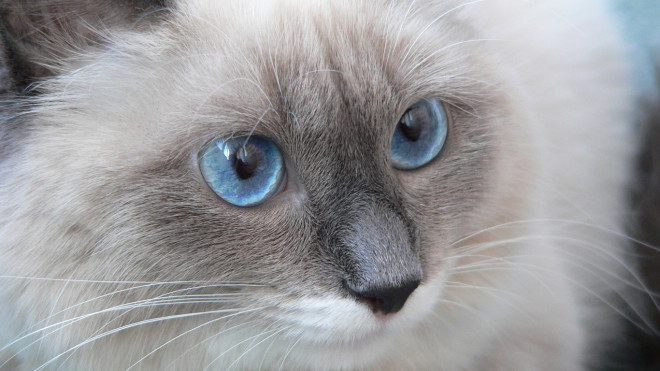 Limbs - large and strong legs, thick and slightly shorter, with tufts between the toes. Hind legs slightly longer than the front.

Tail - rather long, with a slightly pointed tip, is rich in forest edge.

Wool - usually long, thick, tight to the body. At the touch of soft and silky. On the muzzle the hair is short, but goes to the lengthening of the neck, shoulder blades back. On the hind legs longer than the front. Number undercoat have minimum, so care does not have to bother - coat never goes awry. In winter wool length increases.

The formation of a sufficiently long appearance cats concerns not only the size, but also color.

The kittens are born completely white, then gradually begins to form the body color.

In adults, it should be one of the below-described three kinds of color:

Color-point - mask on the face, which comes on the forehead and ears half. It has a darker hue, unlike the main wool. Chest, chin and neck, on the contrary, lighter. 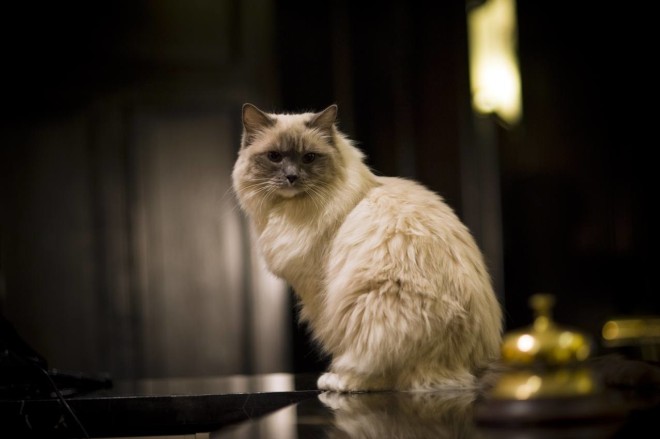 Mitted - color mask that covers the cheeks, pads under his mustache, nose, forehead and eyes. In the area of ??the chin, chest and neck white color. Sometimes the white stripe on the neck, passing through the abdomen to the base of the tail. Cats coat color brightens up and down. On forelegs white pads, gloves like. Hind legs white from the bottom to fold space. Usually, in the blind spots locations pinkish skin.

Bicolor - color, which clearly highlighted mask, tail and ears. Attractive face can be formed on the white triangle, exciting nose pads and chin. Triangle sometimes becomes symmetric chest graphic. Legs, stomach and chest completely white. On the back hair is lighter. A combination of colors may be different.

According to the standard, color may be represented in the chocolate, purple, blue, dark browns. These representatives of the breed should not be a monochromatic color, it is considered a marriage. And they must be white mustache.

Ragdoll - this cute kittens, with a calm and serene character. They are very neat and good-natured. Ragdoll quickly adapt to new surroundings, naughty and supple. Shortcomings in the character of these cats have virtually no, they are docile and quiet, if they want something you have to ask, they will do it a gentle soft voice.

They get along very well with all people in the household, especially like children and tolerate all their affection and pulling from place to place, rather it is even joy. A big plus for them is that they do not have to scratch habits.

They completely conflict-free, easy to get along with all pets, accustomed to a leash. These cats are phlegmatic, trusting and a little slow.

Cats of this breed is incredibly affectionate towards his master. Constant communication with him is the greatest need for them. Cat ready to meet you at the door, sit on his lap, mess under your feet, just to earn a drop of your attention and constantly be around.

Plus, this breed is a high level of intelligence, you will not be difficult to teach him simple commands, to distinguish the tone of your voice, accustomed to the tray. Ragdoll affectionate love when they hug and indulge.

Ragdolls are very fond of the procedures associated with caring for them. Wash and comb these cats should be a couple of times a week.

One of the health problems of this breed - hip dysplasia. But often found the most dangerous disease - feline hypertrophic cardiomyopathy, a common heart disease. Most often it comes to cats in their old age, but it can also be passed on through inheritance. It is dangerous because it can cause sudden death in cats is relatively early age. 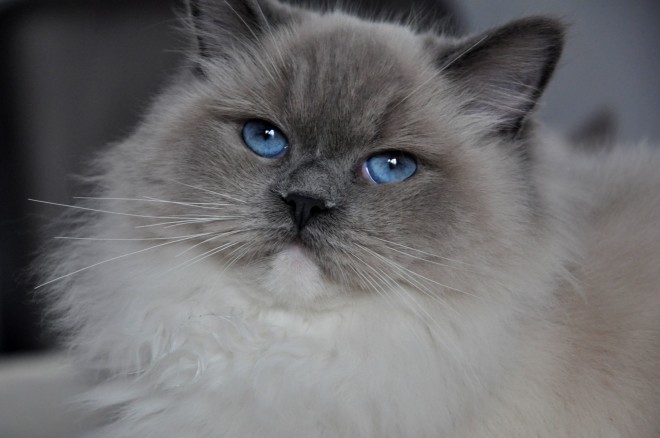 Another shortcoming in the breed's health is low muscle tone, which is why from nicknamed "rag doll". This physiological feature distinguishes them from other cats - they are not able to roll over in the air to land on their feet.

Breeders from the very first appearance of the Ragdoll are disputes, whether this breed of independent, or "defect" in the Burmese breed cats. This creates some difficulty in contrast to the present Ragdoll, because they do not often see at the shows.

If you do not want to run into an aggressive animal only resembles a ragdoll, then purchase a kitten in nursery with a good reputation.

With the right choice, you can enjoy this extraordinary breed for many years. Ragdoll life expectancy of 14-15 years.

The cost depends on the parents of the title, the place of delivery. Price ranges from about 10 to 40 thousand. Rub.