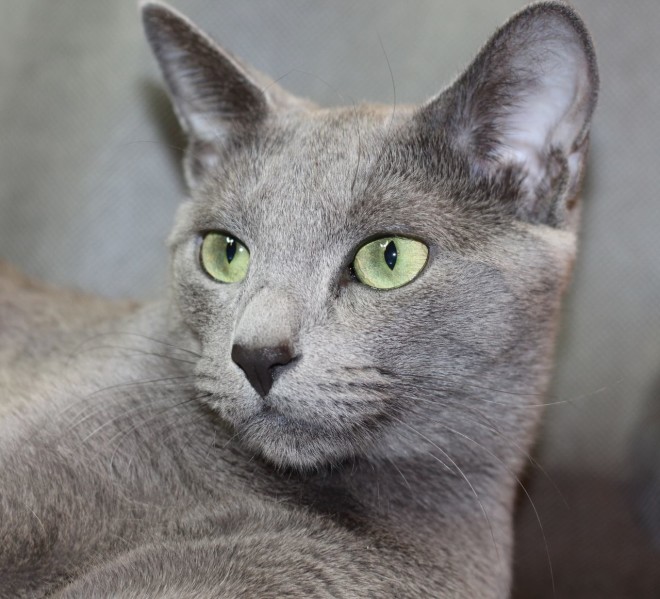 Russian blue cat - is a very common breed of cat in the world. It is no coincidence, because inherent in it genuine grace and intelligence, as well as the dedication and loyalty. The first official mention of this breed date from the middle of the XIX century. The birthplace of Russian blue cat is considered to Arkhangelsk, only the popularity it has gained in England. They were brought to the UK exquisite cat gray-blue color sailors. Both in Russia and in England the cats of this breed is attributed mystical properties, they considered them a magic talisman.

Cats elegant gray-blue color are considered indigenous Russian breed of cats. For a long time between researchers felinologist ongoing debate about the true origin of the cats of this breed. Similar cat breeds met in England, Scandinavia and Spain. But this breed of cats never lived in a natural environment, the UK, and only has been obtained by selection, what is the undoubted merit of British scientists. According to the testimony of the ancient Vikings, who lived in Scandinavia, it can be judged that it is in the northern areas of Russia lived Russian blue cat.

In the Russian view was that the cats of this breed protected the people from the evil spirits, so they are often put to sleep with the children.

They say that the Russian Blue was a very brave and excellent catching mice. Cats were popular also because of its unusual color: they had a bluish color of the skin and silvery hair, something resembling fur fur seal. Due to the extraordinary hair and green eyes Russian blue cats were particularly popular among the nobility. The most famous owners of cats of breed Russian Blue was Koroleva Viktoriya, famous admirer of cats, and members of the family of Nicholas II.

Over time, the Russian Blue became increasingly popular in Europe. At the end of XIXveka British scientists involved in breeding Russian blue steel cross them with indigenous representatives of this breed from Russia, because British representatives inferior to them in quality and density of fur.

Up until the 1912 Russian blue cat has participated in all exhibitions in line with the French and British blue cats, but after the formal division emerged a clear distinction between the massive British type and "foreign" type with a lightweight build. 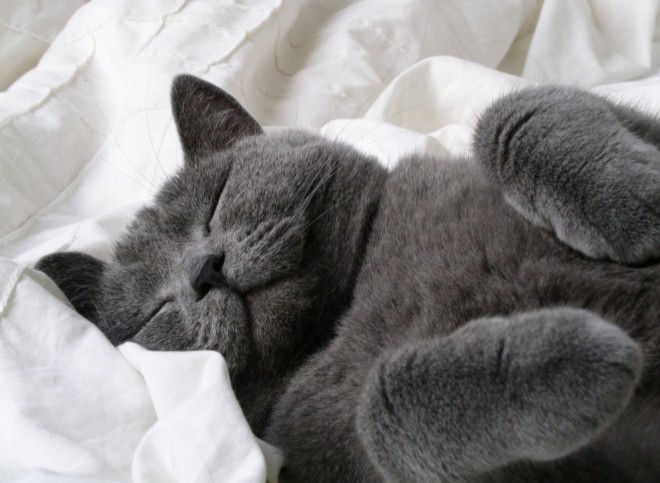 The Second World War has not been in vain for the representatives of Russian blue cats, and this breed could just disappear. Danlou Zoo in England cared about the preservation of the breed. Even had to resort to crossing the blue cats with the Siamese breed, which naturally affected the individual features and proportions. Because of a failed experiment breeders had to carry out extensive work to restore the pristine image of Russian blue cat breed. Therefore, we can confidently say that modern Russian blue cats look the same way as their ancestors did in the XIX century. After experiencing rebirth details cat again took the leading position of the most popular in the world.

Ears - Large, slightly pointed at the ends, are located well, slightly weighed down forward. Vertically standing on his head.

Nose - straight and flat. Wool and nose are usually gray-blue.

Color - even without impurities, with a clear blue silvery hue. 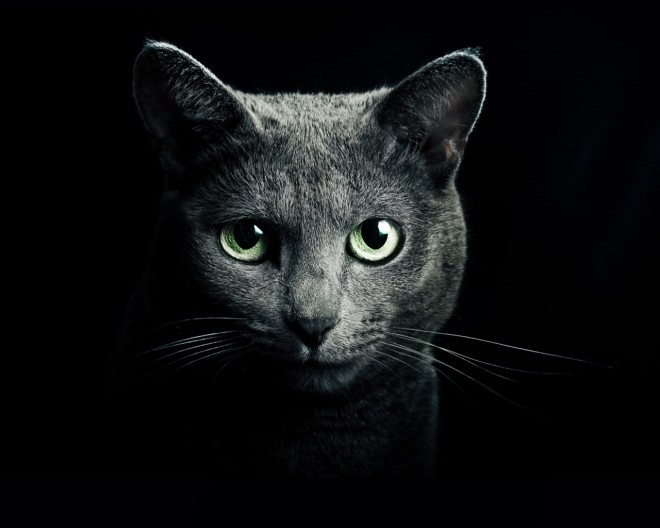 Forefeet - thin and straight, well muscled. Feet roundish and small. The pads on the feet are purple-pink shade.

The tail - a long, sharply tapering towards the end.

Russian blue cats are affectionate docile nature. They are obedient and respectful. But, despite this, they like to show your character, although do it wisely. When the host only shows its best side always responds to the timbre and tone of the human voice, as well as to human gestures. It never takes vengeance. Russian blue cat happily sit on your lap, but never allow myself to disturb. 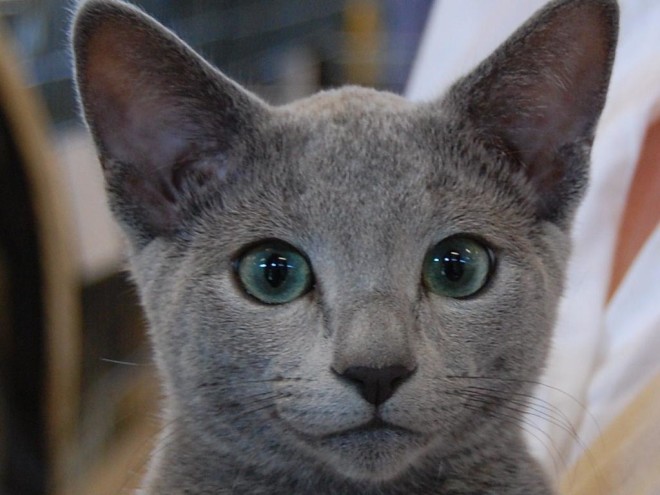 Very cautiously and carefully behave with strangers. It will stay cool as long as does not feel mutual trust to a stranger. Very well, this breed fits into the life of the family, even the greatest. Very often these cats keep older single people.

They have an amazing feature - the ability to listen and reassure the person that he is experiencing particularly strong.

With young children Russian Blue becomes very playful, but what is remarkable - never use claws, even if it is punished. Disagreements can arise except in the relationship with dogs.

Education of Russian blue cats must take place in a calm gentle tone. At the young age of one can easily learn to use the tray and kittens. Given the rather soft and quiet in nature, in training Russian Blue do not need.

Due to its small size cat can live very well even in a fairly small apartment. Russian blue cat does not need frequent walks, you just systematically ventilate the room. Very fond of improvised games, and toys can be the most diverse: both purchased in a specialized department and came to hand household items (small balls, a ball of yarn). 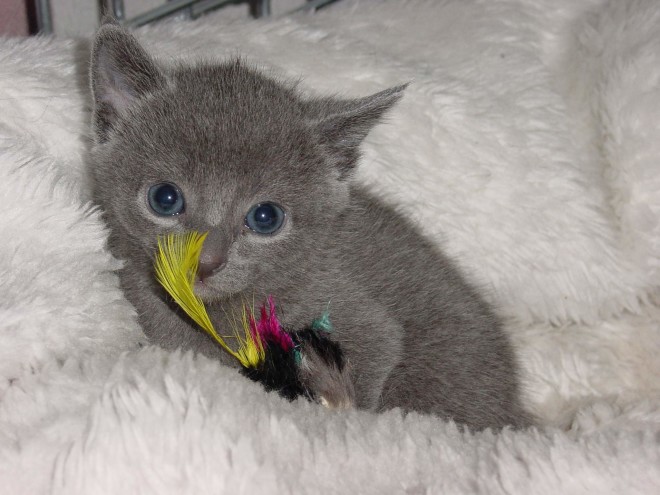 Often in nature blue Russian cat restless and playful. For a comfortable stay in an apartment this cat just need to have a house on a hill or a ladder. In Russian Blue is very developed predator instinct: they are chasing insects very well and jumps high. They can easily jump to the cabinet, where they like to arrange a corner for intimate games.

Caring for cats of breed Russian blue in essence no different than caring for other short-haired breeds of cats. Their inherent cleanliness allows the owner to pay attention only to water procedures and care for the ears.

Frequency of water treatments should not be more often than once in 6 months. The ears must be handled via a special liquid-wetted swab or soft tissue.

This breed of cat, as we have said, prefers to play and relax on the elevations. Ideally, their personal space should be provided with a roof house on a hill of medium height. No mundane beds they do not fit, are best avoided and open spaces. The feed bowl must be resistant and from a metal. Tray is best placed in the bathroom. 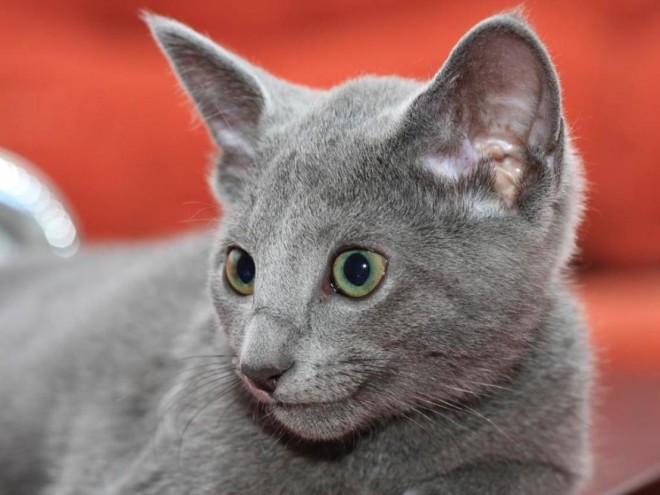 When feeding the animal prepared dishes is best to use a combination of meat and dairy foods in one reception feeding. Meat products such as lean beef or chicken may be combined with dairy products (kefir, low-fat sour cream, yogurt, cheese and cottage cheese). Strongly recommended for use as feed whole milk and fatty fish.