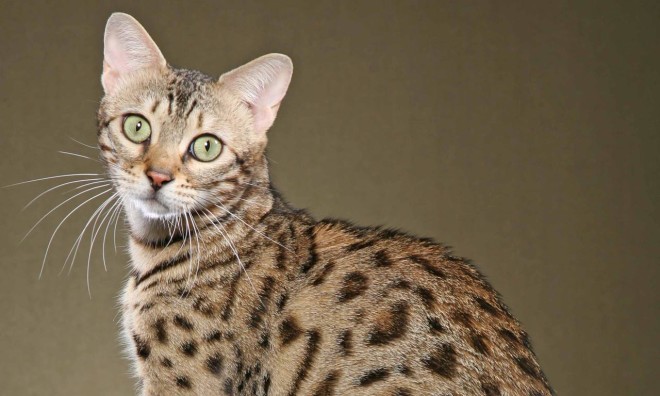 Savannah - amazingly beautiful and graceful cat are among the largest domestic breeds and thus the most expensive.

How did the breed

People have always admired the unique grace of wild cats. But this house such a beauty not zavedesh because the owner at risk of becoming dinner for a pet, unless, of course, is not a professional trainer. But factory owners and breeders for a long time to attempt to bring the breed that looks like a wild cat, but with character, inherent in their home counterparts. Another reason for the withdrawal was the desire to protect wild species of representatives from unqualified "domestication" wealthy, Exciting in their own homes cheetahs, pumas, leopards.

The first viable breed kitten savannah became the kid with the same name the nickname. He was born on April 7, 1986 by a Siamese cat and a serval male (South African predatory cat). animal host has been breeder from Pennsylvania Dzhudi Frenk. Three years later, the kitten from Savannah bought two other breeders and experimenter began work on a new breed. Within ten years after the birth of the first kitten breeders first breed standard was written. However, official recognition of these cats received only in 2001, and even then - only in one of the International Association of cat lovers - TICA. Other unions have refused to register as deemed that the rock is unstable and has no stable traits are passed from parents to offspring.

The more blood the savannah serval, the greater the value of these cats have. The first generation resulting when crossed (50% of blood serval) denote F1. The second generation ( "wild" blood - 25%) - F2. And so to the F5, or fifth generation. The less blood serval, the more it seems the offspring of an ordinary house cat. Sometimes cats breeds derived savanna again crossed with a serval - so to receive the most "quality" of the breed. 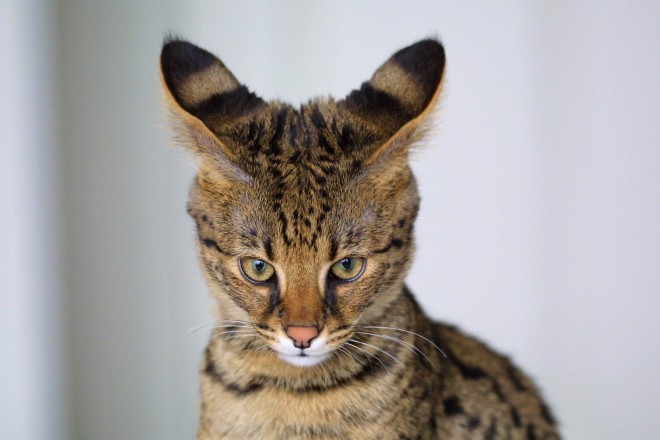 In the TICA savannas are only those of the breed that have a pedigree TICA until at least the third degree.

The most expensive breed of cats

The price of kittens savannah very bite and can reach even up to 800 thousand dollars. This is due to the fact that the removal of these cats are incredibly complex and requires special conditions, a lot of patience and a great experience from a breeder. And, of course, investing considerable funds.

The body of the savannah - high (up to 45 cm at the withers) and graceful, physique resembles a cheetah. Long neck and body. Legs are also elongated, the rear a little bit longer than the front. Tail - Medium length.

The largest cat breed Savanna obtained in the first, second and third generation. As, in fact, cats, weighing up to 14-15 kilograms.

The head is triangular in shape with a very large, high-set ears standing.

The coat is short, soft undercoat.

Color these incredibly beautiful representatives of the cat resembles a serval color or cheetah. And the more "wild" color, the more sought after these kittens. The standard provides for the following types of colors: 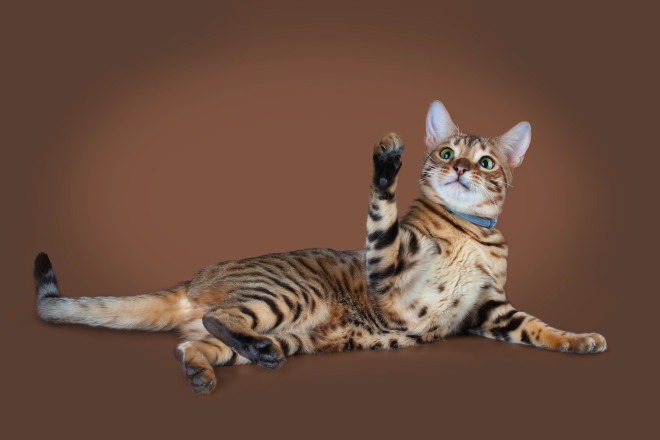 The main background - light, ranging from amber yellow to silver. Dark spots or stripes. On the rear side lugs located "false eye." It is believed that in the wild, they help adults teach hunting Serval kittens, indicating its beginning. Another feature color savanna - "traces of tears" - black lines running from the inner corner of the eye along the nose to the lower jaw.

The nature of the content and features of cats

Cats Savannah breed is extremely intelligent, on their ability to learn is often compared to dogs. By the way, as well as dogs, Savannah perfectly accustomed to a leash and bring the ball.

These cats are very loyal to the owner, ready to accompany him everywhere. Welcome they host a very interesting way - or "butting" his head or lightly grasping claws.

Very curious and active, so when purchasing such a kitten should take into account the peculiarities of character. Easy to get along with other animals, preferring as friends dogs (cats of other breeds Savannahs can bore his boundless energy and endless games). Representatives of the first two generations occasionally exhibit behavior characteristic of their wild osbratyam.

Cats of this breed are not afraid of water, so bathing your pet will not be associated with any complications.

In the care of Savannah unpretentious. Timely vaccination, regular inspection of the eyes and ears and combing fur once a week - and your pet will feel great. Feed must be nutritious, since the first three years strongly growing kitten. 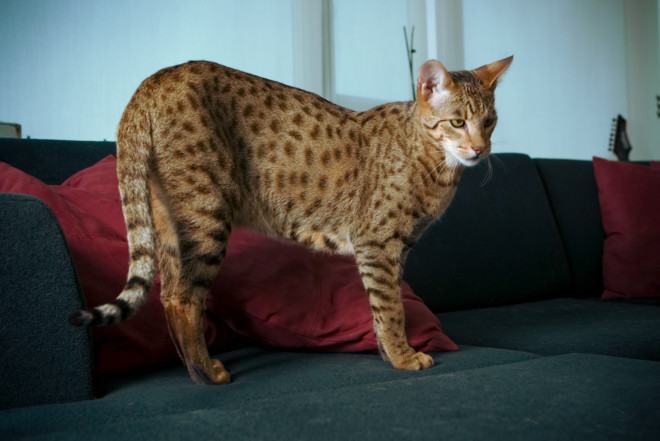 Some genetic diseases among representatives of this breed is not noticed.

But the time and energy your pet will require from you a lot, as can romp and play to infinity. In addition, it is important to take care of the safety of the cat. Savannah perfect jump (with a space to a height of 2.5 meters and above), so jump on the cabinet doors, refrigerators, shelves for them is not a problem. they are also extremely curious and poke their noses everywhere. So you should make sure that the animal does not get hurt. And of course you need to provide a variety of pet toys, so it was not boring, and curiosity has been directed in the right direction.

In September 2009, the Savannah cat breed Skarlet's Magic (first-generation hybrid) was registered in the Guinness Book of Records as the tallest domestic cat. Scarlet record was soon broken castrated cat troubles of the same breed. It grew by 44.45 centimeters.

Males of the first four generations are born infertile, and only representatives of F5 can have offspring.

Serval has the largest relative to body size among the ears of the cat. This line and it transmits to posterity, that is Savannah.

Pregnancy ordinary domestic cats lasts about 65 days, and serval 10 - 20 days more. Because of this early hybrids are often born prematurely.

The F1 and F2 litter is born, usually 1-2 kittens in subsequent generations - from three to five kittens.

Some countries have banned content in hybrids of wild animals. It did not escape the laws and savannah - for example, in the US state of New York to Savannah fifth generation not recognized by domestic cats.