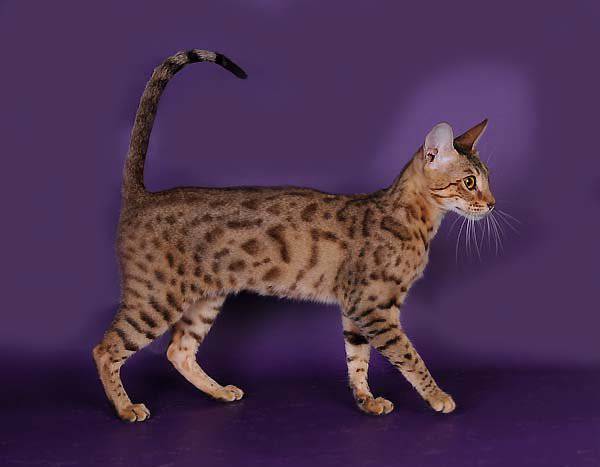 Serengeti cat breed was created specifically to get a pet with the appearance of an African serval. However, in the breeding of this breed wild serval themselves have not been used.

In 1994, American breeder Karen Sauzmen set a goal to bring the breed of domestic cats whose appearance is similar to the appearance of an African serval. However, she decided not to use in the work of the wild cat. As a result, the breed is the result of cross-breeding has produced varieties of domestic cats such as Bengali, Orientals and Abyssinian cats. During the experiments, were used and less well-known species.

His name Serengeti cats are required to Savannah, located in Africa. It is here that there is a large population of wild Serval.

The basis for the creation of the Serengeti breed served as Bengal cats . It is these cats were given a new breed features such as large eyes, large nose, eyes of the predator and gorgeous hair. From the eastern Serengeti breed got refined silhouette and features servalopodobnye faces. From oriental cat Serengeti received such traits as an elongated body, elongated legs, big ears - locators. Serengeti cats are different strong muscles

External features of the Serengeti

This is a fairly large breed. Weight representatives Serengeti up to 15 kg, while the cats usually weigh no more than 8 - 12 kg. This breed is distinguished by large ears, elongated legs, long body and tail of medium length.

An important feature of the breed are honey-colored eyes. Immediately attracted the attention of refined speckled pattern thin and short hair. Spots on the fur of these cats can be round or slightly elongated. Distinguish several varieties of coat color: smoky black, black, tabby spotted. From the corners of the eyes of these cats can be a distinctive black stripe, giving Serengeti special similarity with the wild Serval.

Serengeti cats have a very playful nature. This feature of their manifests itself in virtually everyone. Serengeti is very like to play, even more than the hunt. Of course, only in the event that a small predator hungry. As a toy, these cats are able to use almost anything. Serengeti is very curious and love to explore all available territory. Serengeti - a very talkative cat breed. They constantly emit any sounds, whether it's rumbling, murchanie or meowing. But it all sounds loud and not very pleasant to the ear. These pets love to fight, including dogs.

Serengeti cat breed is very affectionate and very loved-up. They are easy to find common language with children and often insist on attention to his person. They love to be stroked, petted. Serengeti cats prefer the elevated area. In the house they will often climb on the cabinets, the upper shelves. They love to jump and climb.

Serengeti is very unpretentious in food. The basis of their diet should be fresh beef, rabbit. You can vary the meals bird, yogurt, low-fat curds children without additives. Twice a month, the Serengeti is necessary to comb with a soft brush or a special glove.

The price of these cats is quite high, as they have not yet become widespread. Moreover, their removal and preservation of the breed requires a lot of effort.