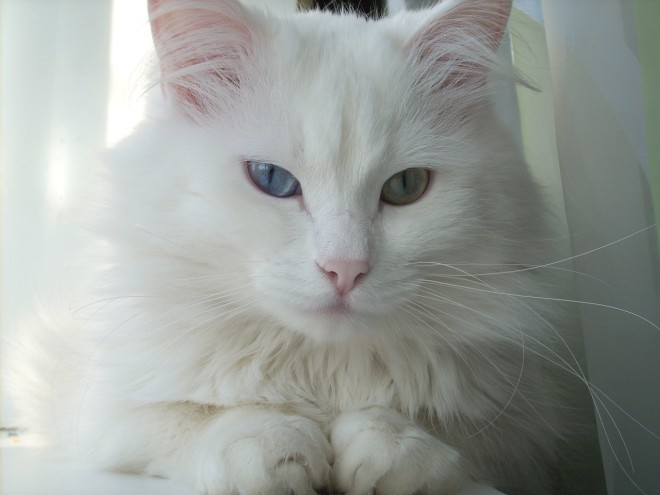 Cats Turkish Angora breed known for their fluffy snow-white hair and a gorgeous lush tail. But sometimes there are pure black in color of these magnificent cats. Some representatives of this breed have a different eye color, while others have a bright blue irises.

These cats have loose medium hair length. Undercoat they do not. On the tail, on the neck. On the "shirt-front" and "pants" hair is the longest. This is not a large breed cats: weight of an adult is rarely more than 5 kg.

Considered a classic snow-white Turkish Angora. But in fact, there are also black, blue, marble, brown and other colors of this breed.

Initially, this cat breed is often imported in different European countries from Turkey as an original gift. This is quite an ancient breed of cats. According to one legend, such fluffy pets lived in the Persian shahs and used instead of napkins to wipe their hands after eating. After all, their soft wool fine washes dirt and grease from the skin.

In Europe, the breed became known in the late 16th century. Turkish Angora kittens were honored as high-end gift. By the 19th century, these cats are widespread among the European nobility.

English breeders were the first officially approved this breed of cats. Continental Europeans brought out its own version of Angora cross-oriental and Persian. From the native cats, these animals are even more fluffy hair and heavy boned.

Interesting fact: In Turkey, the temple is only allowed to enter the white cats with different eyes, because according to legend, the prophet Muhammad as his eyes were different colors. 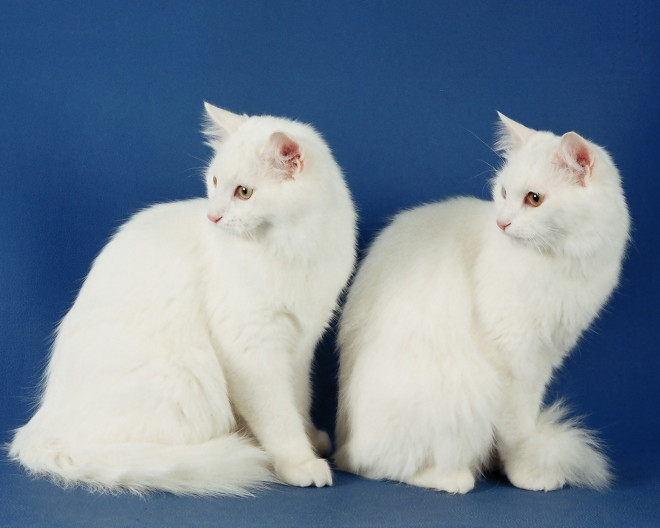 In Russia the first time breeders do not pay enough attention to the quality of kittens Turkish Angora. First of all they were interested in the number of pedigrees. But because of the exhibitions have become a cat began to appear with wool of different colors. There was a question about the quality of the breed and its representatives. When restoring the breed, the Europeans have tried to make her hair longer, but it made the Turkish angora almost indistinguishable from other long-haired cats.

The nature of the Turkish Angora cats

Cats breed Turkish Angora have a special character. They are very sociable, very fond of their masters and get acquainted with pleasure with all the guests of the house. This is a very gentle and tender beings. They like to follow their owner and are trying all the time to be near him. These cats have an extraordinary mind. Angora is very intelligent and easy to train. They can easily become accustomed to almost any conditions and can easily tolerate changes. Cats breed Turkish Angora easy to get along with children and other pets. Their character is very friendly and flexible.

These cats are very sociable and playful. They are enthusiastically responding to any communication, fun and games. 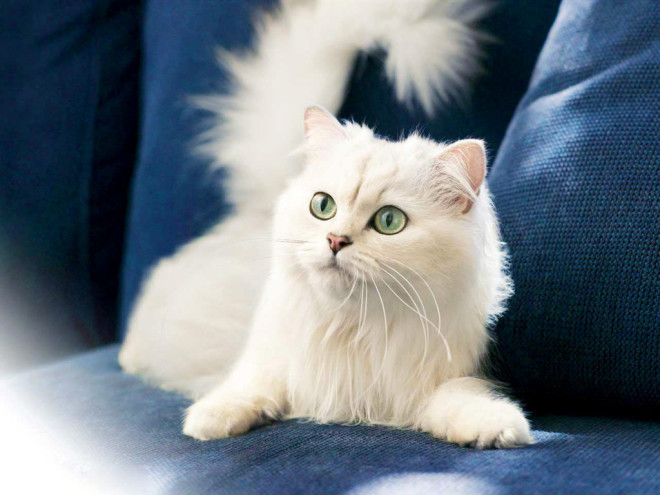 Caring for the Turkish Angora

Cats breed Turkish Angora have fairly long hair, so they need to comb out 1 - 2 times a week. If the pellets are formed on the fur, they must be neatly cut. Due to the fact that these cats do not have an undercoat, their fur almost goes awry. Since these cats have a snow-white hair, sometimes they have to bathe. In this case, only a special cat shampoo.

The diet of these cats must be a sufficient amount of fat-soluble vitamins. Thanks to them, the cat will be shedding is not so intense.

All cats with snow-white hair is often found one flaw - it's deafness. Therefore, choosing a kitten, be sure to test it for hearing.

The price of this breed is not very high, since it is a widespread species. But, choosing a kitten, you need to pay attention to his pedigree. Often by mistake or for the benefit of trying to sell purebred kittens as angora. By the way, in our country the best herd of Angora cats in the world.