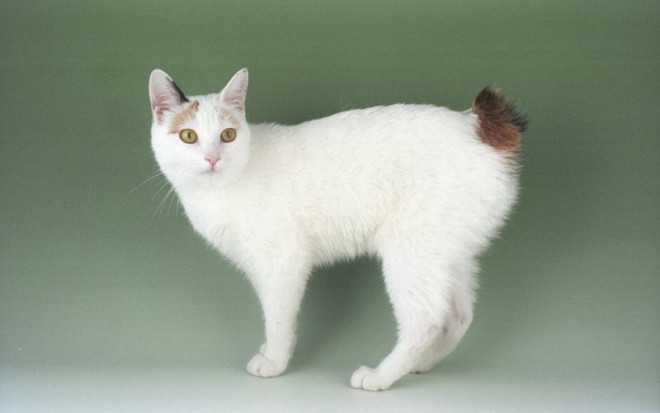 Japanese Bobtail cat breed known in the Far East since ancient times. Their distribution has reached the Japanese islands, and only from there in 1968, these charming creatures came to America. The name "Japanese Bobtail" these cats got here. In his native Japan as they were called "mi-ke". Here, these cats ascribed divinity, and not infrequently they became the subject of a cult.

Japanese Bobtail cat breeds have ancient roots. Their images can be found in the engravings and old paintings that belonged to the imperial dynasty. The temple Gotokudzhu in Tokyo also has pictures of these cats. And now in Japan in the souvenir shops can be found figurines depicting the Japanese Bobtail, greeting raising the front foot. These figures even have their own name - "Maneki-neko". With the Japanese it is translated as "to greet the cat."

The nature of the breed

Cats Japanese Bobtail breed is characterized by the traits that are considered to be inherent to the Japanese. These beauties phlegmatic enough, intelligent. They know what they want from their boss, and different special devotion. Japanese Bobtail love to "talk". Their meow has a nice range of intonations, and it is seldom loud. These cats can be easily trained "Oporto" team. In addition, they like to swim, oddly enough for members of the cat family. Their wool Naturally has water repellency. This is a very intelligent and friendly creatures.

These cats - worthy descendants of the samurai. They have no equal in the hunt for mice. They are able to fend for themselves. They love attention and its lack can clearly express their dissatisfaction. 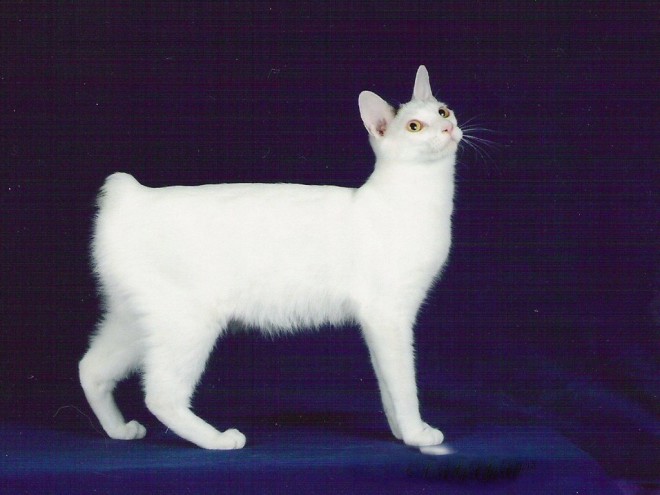 Japanese Bobtails are medium-sized cats. They have a slim figure, a short tail and a beautiful, narrow and wide-set eyes. The body of these elongated cats of medium size. Legs of these beauties are long and slender, the hind legs are longer than the front. A distinctive feature of the breed - caudal vertebrae are angled. The head of these beauties has a triangular shape. Cheekbones are quite high, and very wide muzzle. Color Japanese bobtail is quite interesting. These cats usually have two or three-colored coat. The main color is usually white. Canonical color of these cats - white with red spots. Fur of these cats is not long. On the tail is much longer than on the face and legs. This short-tailed breed. 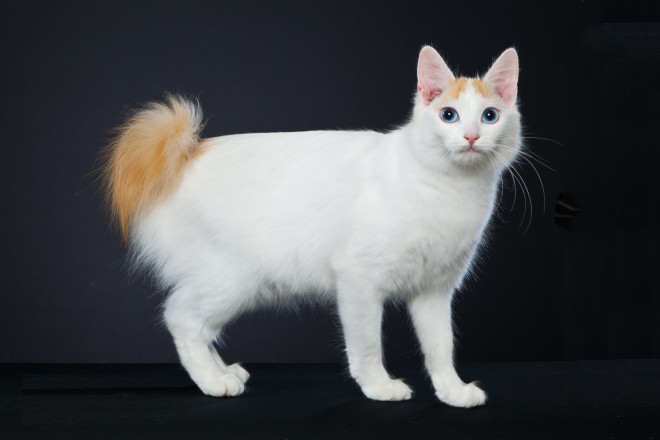 Japanese Bobtail Kittens love to play and frolic. In most cases, they are born to light four. These cats are usually born healthy and strong. This This breed is not recommended to breed with other cats. Incidentally, in the crossing of the conventional short-tailed breed cats Kittens born with normal tails, as there has korotkohvostosti recessive gene.

Due to the fact that the wool of these cats is short enough, they do not need frequent combing. Due to the absence of thick undercoat of fur is not exposed to stall and abundant molt.

Japanese Bobtail is very fastidious in choosing their food. These cats are very fond of fish, which is not surprising, because their country - Japan. However, they can be taught to high-quality finished feed.

The price of these cats is quite high. Despite the fact that the breed was officially recognized in 1976, it is still considered rare. In Russia, these exotic beauties often jokingly referred to as "sushi cat."