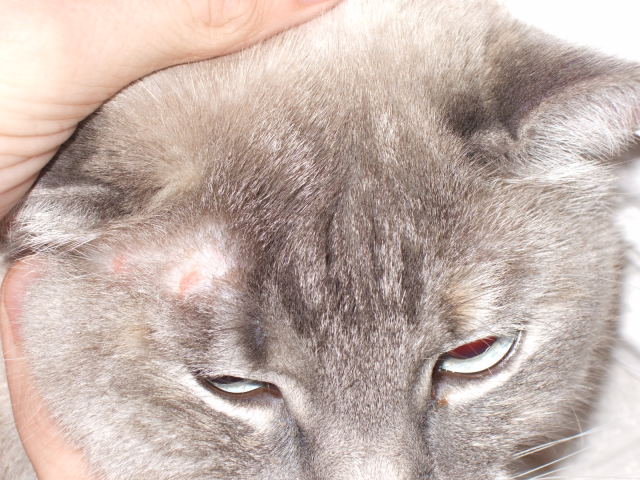 Ringworm - a kind of fungal infections in animals, which in 90% of cases "mikrosporium" is caused by a fungus. Spores of the fungus not only have the ability to grow on the skin, but also used as a source of power epithelium superficial layers claws and hair.

Typically, the source of infection is a cat. Ringworm can occur in cats of any breed entirely, often because of a weakened immune system or poor care. Good care requires regular combing, proper nutrition and timely processing of fleas.

The disease affects the hair, nails, skin of the animal. More common in long-haired breeds. Thousands of spores produced daily in the lesion, gradually affect larger and larger areas of the body. Such lesions are a source of infection for other animals. In the running as it may cause blindness or death of the animal. This fungus is very hardy in relation to environmental conditions. Its spores can get into the house with the dust on the shoe, so it can appear even in cats, do not leave the apartment. Most often it is encountered hosts of kittens up to one year, cats with poor diet or a weakened immune system, as well as infected with parasites. The cat may be infected by rodents, susceptibility to infections. 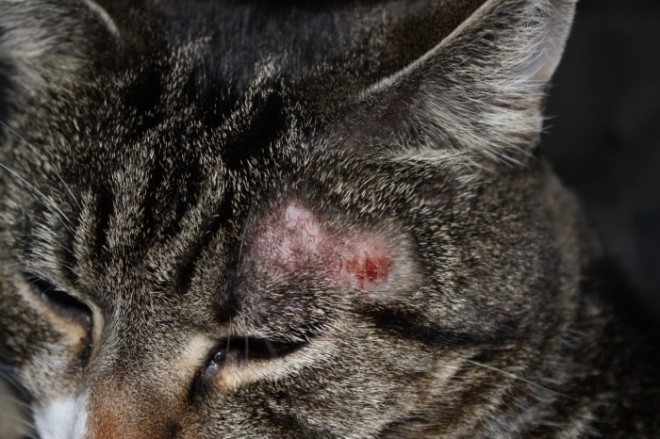 The disease can occur in the form of a small rash, which the majority of owners do not pay enough attention. Define it is possible only if a thorough going-over animal skin cover. Also, the cat can be for several years to wear a fungus spores, which will be distributed only after a while.

It looks like this disease as the accumulation of small round spots on the skin with the missing scalp, the central part of the affected area is often covered with scales.

Often seen the presence of small pustules or vesicles. Over time, this spot increases in size. With the development of depriving the animal's body appear noticeable bald spots. Sometimes the itching is present. Most often, the affected places are the head, ears and tail. Sometimes patches can have an elongated shape, crossing the face, nose, lips and chin. It happens that the ringworm immediately covers the entire body, and the skin begins to peel off, creating a sense of dandruff. With the defeat of the claws, it causes them to abnormal growth and deformation. In the later stages of the pet's behavior changes dramatically, it becomes less active, often sleeps, does not respond to his nickname.

The risk of human infection, especially children, is extremely great, if a family has an infected animal. For a person with a normal immune system, ringworm is not a big threat. Upon detection of a cat's symptoms depriving required to show it to the doctor, as well as take it in the house of a separate corner, limiting contact with people and other cats.

There are more than five hundred species of fungi that infect both animals and humans.

So as a kind of fungus, its degree of development, as well as the causes of the infection can be varied, it is necessary to clearly define what specifically to treat your pet.

For the treatment of cats and cats with short hair and small lesions, generally used ointment antifungal effect, e.g. miconazole or thiabendazole. In more severe cases must be added to ointments oral preparations. Often, for the application of the ointment, we have to cut out a wool. This should be done with gloves, being careful not to irritate the skin, so that the fungus does not spread more. Remember, scissors, comb and other tools used by you at sostriganii wool, are currently on fungus spores. 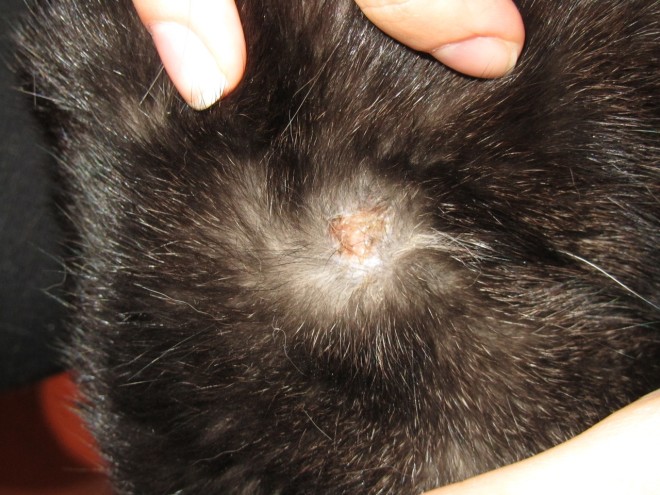 It recommended treatment baths with lime sulfur. They have a not very pleasant smell, and can give hair a yellowish tint, but usually very effective action. Another way - shampoo and rinse with the content of miconazole and enilkonazola. In no event should not be used when bathing ordinary soap or shampoo, as this may contribute to the spread of disputes zoster.

Oral drugs are used in cases with large affected areas, either in the defeat of the claws. They are also appointed as ointments do not help within two to four weeks of treatment. Then use itraconazole or terbinafine. If there is no result after the done treatment, drugs are administered by injection. The course of treatment usually lasts no more than a month. It is important to monitor the cat, her nutritional status and give her peace.

Cleaning the territories from spores ringworm

Fungal spores can persist for a long time, so it is very important to clean them space cats. Airborne spores together with dust and filaments thus when cleaning methods need to try to avoid contributing to the movement of spores in the room. Furniture, curtains and carpets should be vacuumed and to steam. Wood and rusty paint surface should be again. Carry out a wet cleaning with detergents, for example, a solution of bleach in 1:10. It is required to disinfect cat sleeping places and brushes for combing.

Prevention of ringworm in cats is its proper nutrition, good grooming, and limiting contact with potential carriers of infection. There are also vaccines for ringworm, which is quite suitable for the treatment, but do not use them for prevention, it is meaningless, and sometimes even dangerous.