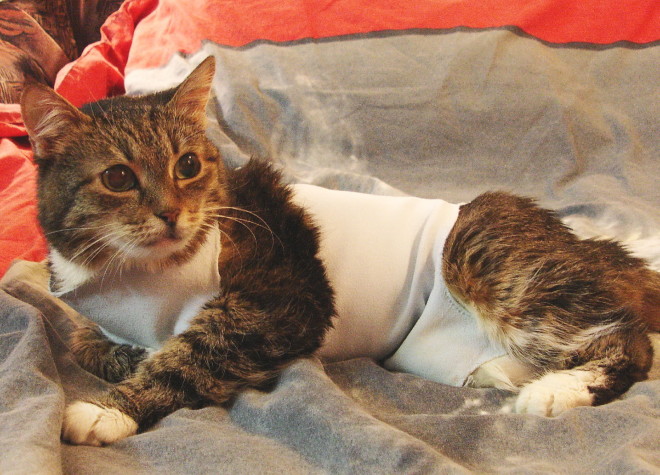 Oncology is a disease that affects cats much less frequently than dogs. However, almost all the education in the cat's body cancerous. Cancer in a cat - is a serious disease often leading to death. This pathology requires a long and serious treatment under the supervision of a specialist.

This disease is a disruption of the operation of the DNA molecules. These molecules are found in every cell of the body and are responsible for keeping information on all procedures performed by each cell. Cancer begins with a small number of cells, the DNA molecules are given crash. They begin to uncontrollably divide, change their functions. Such cells are distributed throughout the body with the blood flow. In places where they are located stops new education. It should be noted that benign tumors do not spread metastases. Malignancies, increasing in size, penetrate into the tissue of healthy organs, preventing the normal exercise of their functions. At the final stage of the disease and the body's immune system is simply unable to cope with the pathogenic effects of mutated cells.
Almost any tumor has its period of existence, after which the decomposition process starts, which causes necrosis of the tissues, the appearance of ulcers and internal bleeding. 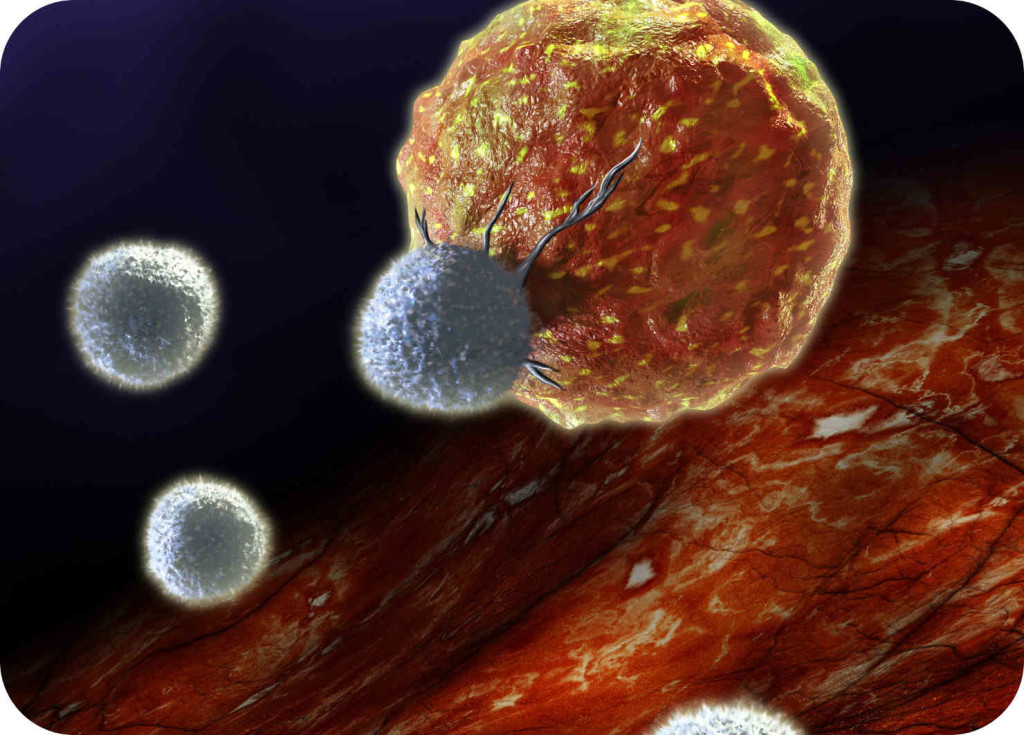 whether the cancer is contagious of the cat?

Recently on the Internet there was an information about the alleged viral nature of the disease. In fact, these allegations are without any foundation. Cancer is not contagious even if the affected cells are introduced into a healthy body. Numerous experiments on volunteers conducted by scientists around the world have never led to the contamination of the test.

Inherently cancer in cats is identical diseases affecting humans. So that you should not believe the empty chatter about what a sick pet oncological disease can be dangerous for you and your family members.

Until now, doctors can not unequivocally determine why cats get cancer. However, by statistical observation of the animals were found several factors, the presence of which in varying degrees, provokes disease. These include:
• Heredity and genetic predisposition.
• Weak immune system.
• Injury to internal organs.
• Food products of poor quality.
• Physical inactivity.
• Second hand smoke.
• hormonal disorders.
• Presence in the body of certain viruses, fungi and bacteria.
• Frequent and prolonged stressful situations.
• Bad ecology.
• Exposure to ultraviolet and ionizing radiation.

Symptoms of the disease and species.

Neoplasm can appear in any internal organ of the body except for the cat's heart. Symptoms may vary depending on the location of the tumor, general health of the animal, as well as disease stage. The symptoms can be pronounced or latent and not manifest itself for a long time.
When liver disease is a change of the chair, the animal quickly overwork, bad eating, relieves a significant amount of weight in a short period of time. Also, due to the disruption of the normal functioning of the liver begins jaundice.
With the localization of tumors in the lungs appears dry frequent cough, develops over time in hysterical with purulent discharge. Cat breathes heavily, though not experienced physical activity. May appear strange fluctuations in body temperature.
In gastric cancer is often diagnosed severe weight loss, change in stool, anemia, fatigue, denial of food, elevated body temperature. When bowel cancer symptoms are similar, but there is more blood in the secretions, bloating, bad breath, frequent constipation and diarrhea.
Breast cancer appears as a small seal, which can be seen only feeling animal. However, as the tumor increases in size and it becomes visible to the naked eye. In the last stage tumors are opened, and in this place formed ulcers. It is important to know that this kind of cancer in cats is most often diagnosed, is not less than sixty per cent from all of recorded cases. However, if the cat has passed a sterilization procedure before the first breeding season, the risk of this disease is practically reduced to zero. Also, this medical procedure is one hundred percent prevents cancer of the uterus and ovaries.
Skin cancer is characterized by the emergence of multiple ulcers, the spreading stains, bumps on absolutely any part of the body. If you have time to determine the pathology at the very first stage, it is usually the treatment is very effective.
When kidney cancer in the animal's urine may appear particles of blood, with the early stages of the disease, not every time you visit the tray. It often enters the home side's misleading. In this case, the animal loses appetite, his mood is deteriorating, there are pains in the kidney area. In the evening, possibly fever.

To date, medicine offers the following methods by which you can identify the cancer:
• ultrasound.
• CT.
• MRI.
• X-rays.
• Endoscopy.
• cytological and histological studies.
• Laboratory analysis of blood samples. 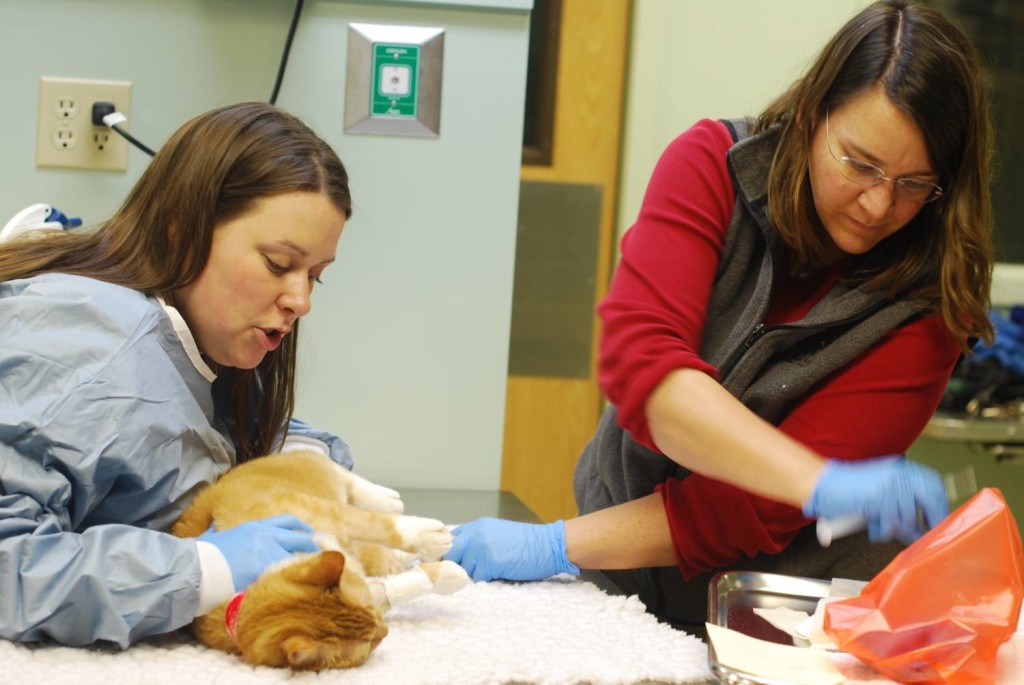 The doctor selects a method of diagnosis, based on observations made during the initial examination. Once it is found out that the type of the disease struck the pet needs to work with the owner to choose the method of treatment.
To date, there are several ways to combat this dangerous disease:
• Surgery to remove the tumors. However, this method is not always effective, as very often cancer cells spread through the body and cause metastasis.
• Chemotherapy is a method of impact on the body of the animal with treatments adversely affect the vital functions of cancer cells.
• Radiation therapy is the exposure by using a specific radiation field, in which cancer cells are localized.
• Immunotherapy is commonly used in addition to all the methods listed above, as the defeat of animal diseases with a weakened immune system is virtually impossible.

Many owners to hear about such a diagnosis, just throw up their hands, because they believe that cancer is incurable. However, be sure to fight for the life of your pet, there are many cases to get rid of this disease. In any case, support your cat, because the animals feel that you need them and will themselves to fight the disease with all his forces.