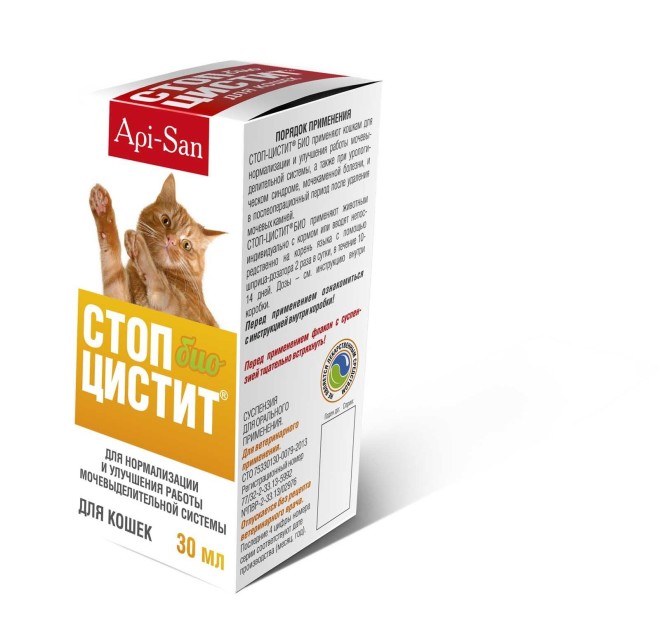 Currently, veterinary medicine can cure almost any disease in your pet. However, there is an old truth, which reads as follows: It is better to prevent than to deal with the consequences. Due to the nature of our climate cystitis is a very common disease in domestic cats. It is a disorder of the genitourinary system feline body. This pathology is common in domestic cats of all breeds, age and sex. On its development and emergence can affect the diet, habitat conditions and animal genetics.

According to statistics, the cats exposed cystitis more than cats. This is due to the structure of the body of the animal is male.

To minimize the possibility of this disease should be to feed your pet. Today on sale there are special feed for animals susceptible to the disease cystitis, or already suffering from this disease. Also in the prophylactic and therapeutic purposes has long been successfully used drug - Stop cystitis for cats.

Stop cystitis for cats is a drug that is used to combat diseases of the genitourinary system in animals at any age. The release form - suspension for oral administration. Fluid has an even color and a pleasant smell. It allowed the formation of sediment during prolonged storage, which is easily dissolved with stirring. One vial contains thirty milliliters of the drug. Also in accordance with the law in the package is an instruction to a medicine and a special syringe for the administration of a suspension into the mouth of the animal. Price of the drug is quite democratic, because it contains a variety of classic, yet effective herbal ingredients. 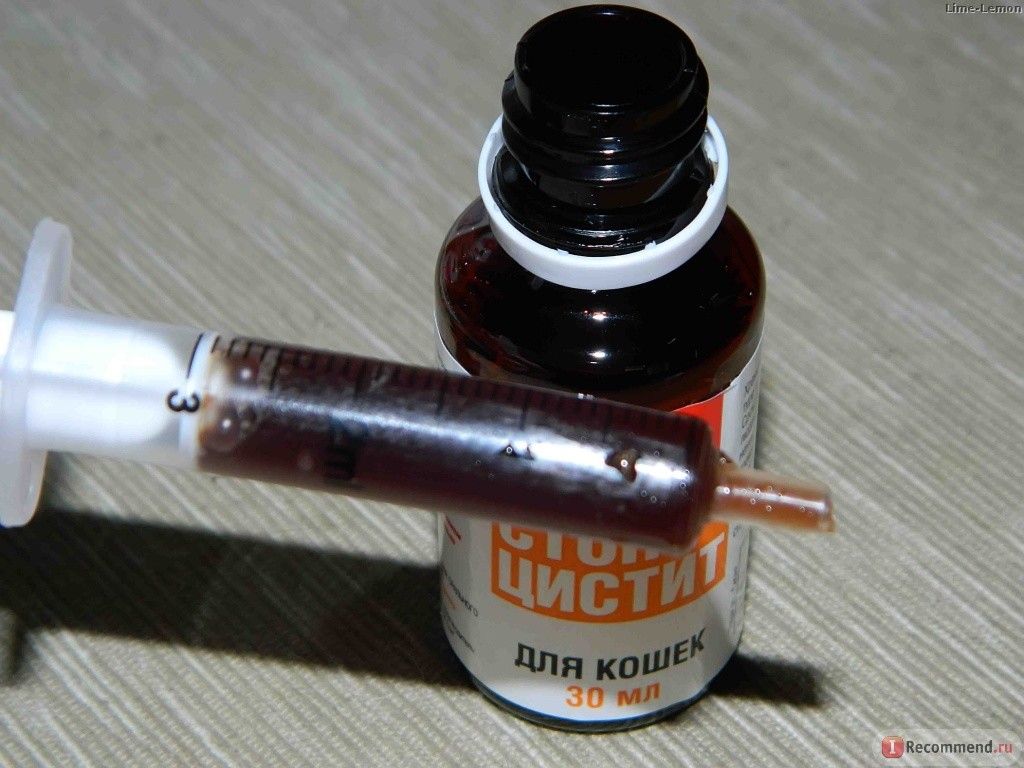 Pharmacological properties of the drug stop cystitis cat quite broad. Its constituent nitroksolin has a powerful antimicrobial effects. It effectively resists staphylococci, streptococci, enterococci, Salmonella, Shigella, and other enterobacteria. Also good stuff is struggling with the simplest fungi, such as candida.

Besides the drug has anti-inflammatory, spasmolytic and diuretic effects on the body. it also stimulates the removal of toxins and small stones of the urinary tract, the restoration of renal excretory function.

The drug is easily absorbed in the gastrointestinal tract. It is low toxic, since it contains mainly vegetable ingredients. Therefore, treatment of this tool easy to carry animals, it can be used even on pregnant cats and young kittens. And its low cost makes it possible to hold regular prophylactic course in animals prone to urological diseases.

The medical use of the drug is often a preventive nature against diseases urological orientation in domestic cats. It is also recommended to take to stop cystitis cystoscopy and catheterization carried out for diagnostic purposes, the operations on the kidneys, bladder and urinary tract. The drug used in the treatment of diseases such as cystitis, IBC, urethritis, pyelonephritis.

Since the stop cystitis cat has a pleasant scent, many of the animals are happy to eat the food, if it is added a suspension. Also agent is injected directly into the throat of an animal through a measuring syringe dispenser.

The dosage is calculated based on the weight of the animal. Cats that weight does not reach five kilograms, enough to take no more than two milliliters at a time. If the cat weighs more, it can take up to three milliliters. Before you administer the drug to the animal thoroughly shake the bottle. For the prevention of drug will be sufficient to give the above dosages once daily. The course of preventive reception - one week.

When using the drug untreated animal patient, the dose can be doubled. If the situation demands, the course is repeated a week later. However, the best in this respect to consult with an experienced veterinarian.

Since the drug is mainly composed of herbal ingredients, it without any consequences for the health of the animal can be combined with other medicines, vitamin and mineral complexes, specialized foods.

Contraindications and side effects

The drug should not be given to animals who have an idiosyncrasy of the substances included in the medication. It is also possible allergic reaction. When the definition of allergy or intolerance should stop to use the drug. Not assigned Stop cystitis animals experiencing acute cardiac insufficiency and acute renal pathology expressed. In any case, the course of treatment or preventive technique should be carried out under the supervision of a veterinarian, especially for pregnant animals and young kittens.